Keep track of your friends in the Dublin City Marathon 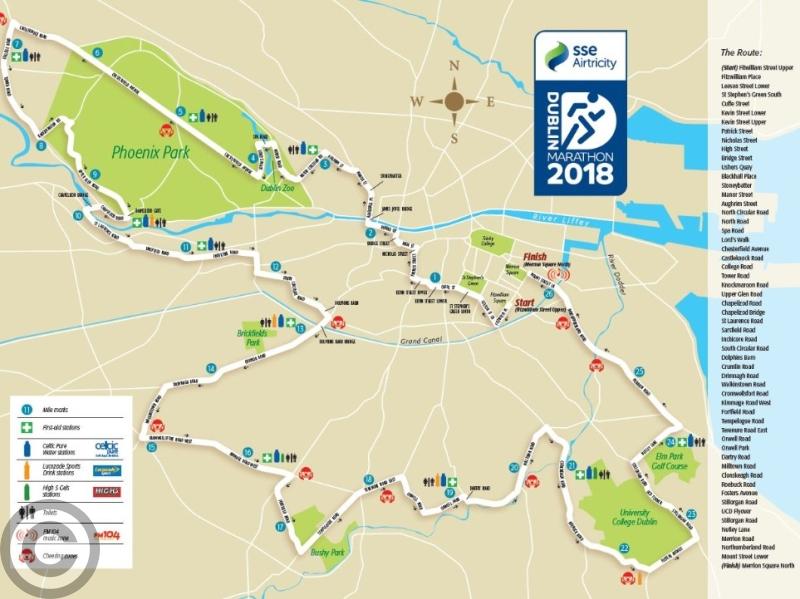 The route map for the 2018 Dublin City Marathon

With runners from all over Leitrim converging on Dublin this Sunday, October 28, for the 39th running of the SSE Airtricity Dublin City Marathon, their family and friends will never find it easier to keep track of their progress thanks to live tracking and live streaming online.

The commentary team for the day will also be made up of some well-known names from the world of Irish Athletics including Ian O'Riordan, Frank Greally, Susan Walsh, Fintan Reilly, Liam Moggan, David Carrie and Feidhlim Kelly so make sure you tune into all the action here

Race Director Jim Aughney said: “We are delighted to again have a sold-out entry of 20,000. The marathon has grown 10-fold from just over 2,000 runners in 1980 to 20,000 today. I am also proud that we are celebrating female runners today, with a special mention to Mary (Hickey) who has competed in every marathon since we started back in 1980.”

This year is a celebration of female runners, linking with the nationwide commemoration of Vótáil 100. Constance Markievicz, a key campaigner for Irish women’s voting rights, will appear on the finishers medal. The Dublin Marathon has over the years, attracted women of all ages and fitness levels from around Ireland and across the globe. In 1980 the first year of the event, there were only 70 female runners entered, in 2018 it has increased to 7,000.

66-year-old Mary Hickey, the only women to have competed in 38 Dublin Marathons and was one of the women who took part in the first event in 1980, said: “I really feel I'm blessed. It's not everyone that can run a race 39 years in-a-row. Life hits you in so many ways so to get to the start-line every year, I'm amazed and surprised by that really and regard myself as very lucky”.

This year’s race also incorporates the European Police Championships. In the Wheelchair race, four-time champion Patrick Monahan will have to contend with a strong international field. For many others taking part, this will be their first marathon and the achievement will be crossing the line.

Leanne Sheill, Sponsorship Manager at SSE Airtricity, said: “As proud health and fitness supporters we are excited for the weekend ahead to see all of the hard work and training commitment come to fruition. It’s also great to see the fantastic growth of the Dublin Marathon and Race Series over the last number of years making it one of the largest marathons in Europe.

"I would like to thank the people who make the Dublin Marathon and Race Series so special every year, from runners, supporters to volunteers and the organising committee, including Race Director Jim Aughney, for their outstanding level of effort and commitment.”

Road closures will be in effect within the city during this event. The SSE Airtricity Dublin Marathon will start at Fitzwilliam Street Upper on Sunday October 28th at 8:55am and will finish in Merrion Square North up to 5pm. For more information see: here