If you or someone you know is interested in getting involved, I would urge you to give it a go 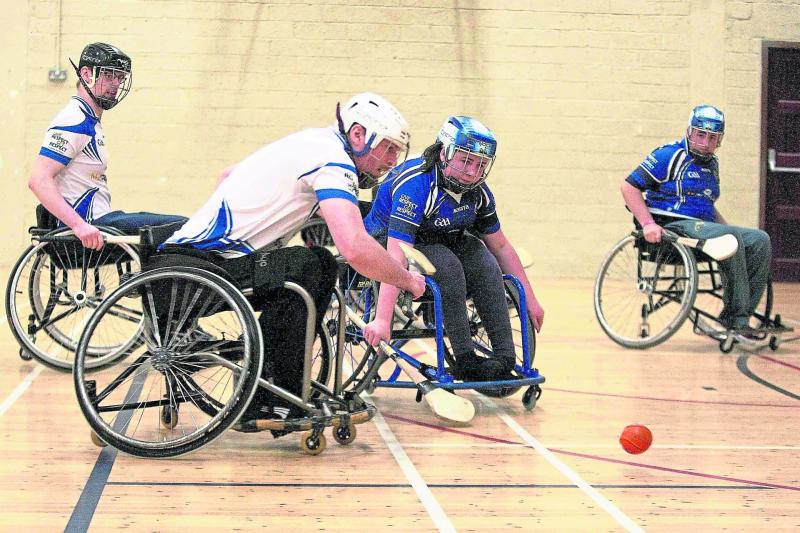 A few weeks back I was fortunate enough to attend the M. Donnelly All Ireland Wheelchair Hurling finals at the National Sports Campus in Abbotstown.

Wheelchair hurling was devised by Tim Maher 20 years ago and has become an established part of the Gaelic Games annual calendar. The teams compete at inter-provincial level during four National League blitz days, one hosted by each of the four provinces. (Ballinamore created a little bit of history in 2017 when it became the first venue in Leitrim to host one of the blitzs.) The All-Ireland Championship day – also a blitz-style tournament – is the finale of the year and is usually held in Dublin.

The All Ireland final games were filled with skill, athleticism, dramatic finishes, healthy competition, and sportsmanship. The only thing missing was a Leitrim representative on the Connacht team. I’m hoping that this article might go some way towards recruiting an interested player or two.

The Connacht Wheelchair Hurling Group first assembled about five years ago when a few players from Munster came up to give a demonstration. It generated sufficient interest to form a Connacht panel of eight players that have been together pretty much since bar a couple of additions and departures. A team has six payers, so, as coach Adrian Hession explains, the current numbers don’t leave much room to manoeuvre.

“Our panel has always been around the eight number so another few recruits would ease the worry of making sure we have a full contingent for every blitz,” explains Adrian, a full-time Games Promotion Officer with Connacht GAA.

“In total we have five blitzes per year. We usually train for the two Saturdays before each blitz totalling 10 training days each year. Trainings last for about 90 minutes and involves a lot of striking and we always have a game at training.

“Between training and game days we meet 15 times per year. Training usually happens in Barnacarroll near Claremorris (central to Connacht), and if that venue isn’t available we train in Charlestown – on the Mayo/Sligo border,” Adrian explains.
Equipment and gear is provided by Connacht GAA who are very supportive of the team. Connacht GAA also have a batch of sports chairs which the players’ use if needed. The players look after their own chair and usually drive themselves to events, while the younger players usually come with parents.

Everything possible is done to ensure that the athletes are well looked after. A hot meal is provided after each blitz day by the host province. Financial support is provided for all blitzes held outside of Connacht in the form of mileage and meal allowance, administered by the Connacht GAA administrative staff.

Adrian is part of a three-man coaching team along with Thaigh Morley and Tim Hynes. All coaches involved have Coaching Certs, Garda Vetting and Safeguarding1 courses completed.

Even though I intended on being a complete neutral at the finals, the savage in me couldn’t but help pitching for Connacht. The panel consists of players from Sligo (3), Mayo (3), Roscommon (1) and Galway (1). Adrian and his coaching team would be delighted to find someone from Leitrim to give it a go.

If you or someone you know is interested in getting involved, I would urge you to give it a go. You don’t need to have any prior experience or to have participated in any prior sporting code. It’s great exercise and fun and the bond built up amongst the squad and coaches was tangible in the National Sports Campus.

“I don’t see this as a disability sport...,” enthuses Adrian, “it’s just another hurling team that I’m involved in. With the added beauty that you never get wet!”

Wheelchair hurling is an indoor game and it is also mixed gender. Roscommon’s Sarah Cregg is a vital player for Connacht – she also happens to be Cathal Cregg’s sister so there is clearly sport in the family.

If you want to find out more contact Adrian on 087-2450566 or feel free to contact me through the Leitrim Observer offices. This time next year you could be an All-Ireland winner.