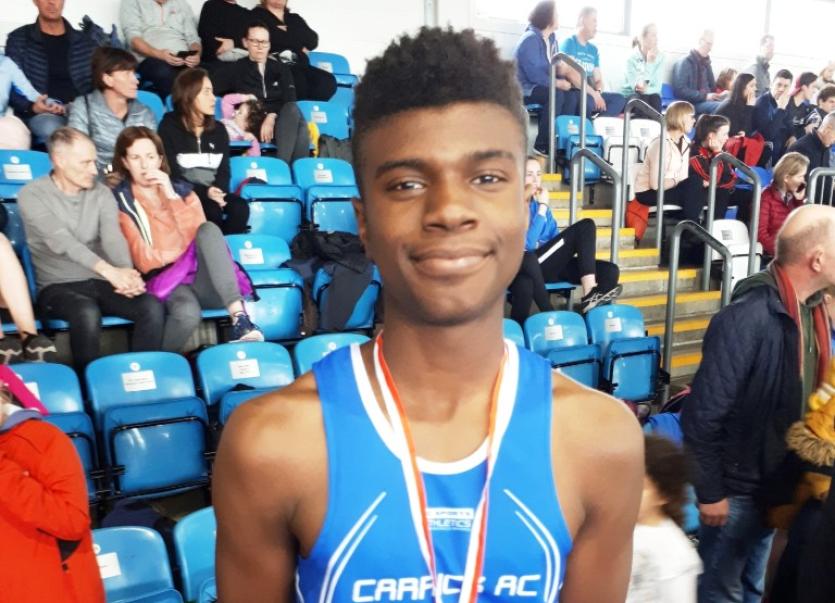 On another successful and busy weekend for Leitrim athletics, Carrick AC’s Toyosi Fagbo really laid down a marker with the largest winning margin in the 60m sprints in any age group at the Connacht Indoor Athletics Championships.

North Leitrim’s Aaron Bradshaw was the top individual medal winner with three individual golds in the U19 60m Hurdles, Shot and Triple Jump as well as being a member of the North Leitrim AC team who won the relay.

It was, however, Toyosi Fagbo who led the way in terms of performance as he sped to a new personal best of 7.45 seconds in the U16 60m, his winning margin of over half a second the largest winning margin in any of the sprints over the weekend.

Not only that, Toyosi’s time was only beaten by two Senior athletes and equalled by the U18 winner as the 15-year-old went on to make light of a poor lane draw in the 200m, his time of 24.37 more than a second clear of the field.

North Leitrim AC had a particularly successful weekend in the walks, hurdles and shot with nine gold medals over those events out of their tally of 13 gold, 11 silver and nine bronze medals over the weekend.

Dean Williams (U14), Lara Mulvaney Kelly (U17) and Cormac Fahey (U17) won in the shot, Sarah O’Beirne (U15) and Darragh Mitchell (U17) in the walk and Diarmuid Gilbin (U17) and Ella McDaid (U17) in the hurdles, Giblin and McDaid beating good competition over the barriers to win by a clear margin.

The 400m race also saw her clubmate Clodagh Sheerin produce one of the gutiest runs of the weekend.

Just in front of her team-mate at the halfway point, Sheerin badly tore her hamstring but completed the entire race, finishing in agony in an incredible display of pain tolerance.

Ballinamore AC picked up their only medal of the weekend when Matthew Lee was a convincing winner of the U14 Boys walk, Matthew’s time of 6.13.11 bringing him home over 20 seconds clear of the runner-up.

The 800m races also saw victories for North Leitrim’s Niamh Carolan and Sarah Brady - Niamh won the U16 race in a time of 2.25.33 while Sarah produce a spectacular sprint and punched the air as she won the U17 race in 2.26.13.

Niamh had earlier won a silver medal in the walk after receiving a 30 second time penalty for infringements that dropped her from first to second while she also took a silver in the shot.

Carrick’s Master athletes were also busy with Michelle Lannon running a superb 10.55.66 to finish fourth overall in the 3,000m and first master while Susanne O’Beirne picked up golds in the Masters W35 400m, 800m and 1,500 to go with golds for Ann Wynne in the W50 800m and 1,500m, Ann getting the verdict over her clubmate Susanne in both races.

Leitrim’s final gold medal came in the U13 Boys 600m where Carrick AC fielded three of the top five finishers.

The sprints saw medals come to Leitrim with Alannah McGuinness battling injury to finish second in the U18 60m in 7.88, still her fourth fastest time of the season while Carrick’s Luke Charles was a superb second in the U12 60m with 8.76 with North Leitrim’s Mark Hazlette, who won silver in the shot, third in a superb race.

Luke then teamed up with Riaghan Guckian, Nathan Casey, Eoin McGowan and Kyle Lannon to take second in the U12 relay while the U17 Carrick girls team of Aine McGwynne, Alanna Murray, Lauren Reynolds and Sophie McCabe were second in their event as North Leitrim claimed silver in the U17 Boys relay.

Oisin Carolan and Nathan Cassidy were in the medals at U19 level for North Leitrim with Oisin 2nd over 400m and third in the Shot while Nathan won silver in the 60m and shot and bronze in the Long jump.

Silvers were won by Luke Fitzmaurice in the U13 walk, Darragh Mitchell in the U17 60m Hurdles and Cormac Fahey in the U17 High jump while Alan O’Beirne (U13 Shot), Edward Mitchell (U15 Walk and Shot), Helen Verachtert (U16 Shot), Ella McDaid (U17 200m) and Eugene Doherty (U18 60m Hurdles) all won bronze medals.

The top three individuals and relays qualify for the All-Ireland Finals on the weekend of March 30/31 and Saturday April 6, in Athlone.