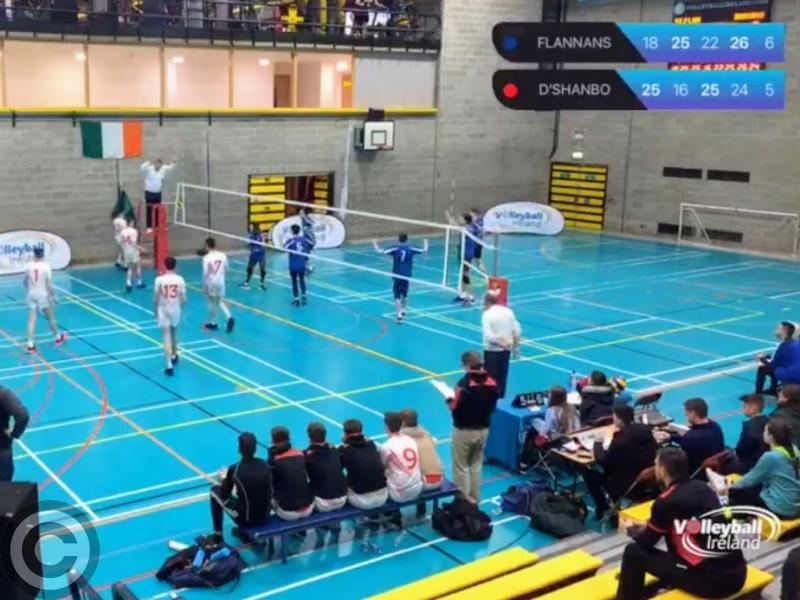 Cruel, cruel heartbreak for the volleyballers of Drumshanbo Vocational School as they saw their dreams of All-Ireland Schools Senior A glory snatched from their grasp after a two-and-a-half hour epic in UCD today (Thursday December 12).

The Leitrim school needed just one point to seal victory against St Flannan's of Ennis as they led by two sets to one and by 24-23 in the fourth set. One more point would have given Drumshanbo victory but the Clare school showed tremendous battling qualities as they fought back to snatch victory and send the game to a deciding set.

Drumshanbo will feel this is a game they should have won as they led by four points in the final set at 23-19 but the fine margins involved saw Flannan's inch their way past the Leitrim school.

The final set was a tough affair and much, much closer than the 15-10 scoreline suggests. St Flannan's set the pace but Drumshanbo kept fighting back, never letting the gap get out of hand and when they closed a three point gap down to a point at 11-10, momentum seemed to be with them.

But in a cruel twist of fate, St Flannan's next two scores both came off excellent blocks on marvellous piledrivers from the Drumshanbo men and a one point gap was now three. One of those blocks was a miraculous effort that saw Flannan's rescue a certain Drumshanbo score only to force an error on the other side.

For those wishing to watch the final again, you can catch the action at the following LINK