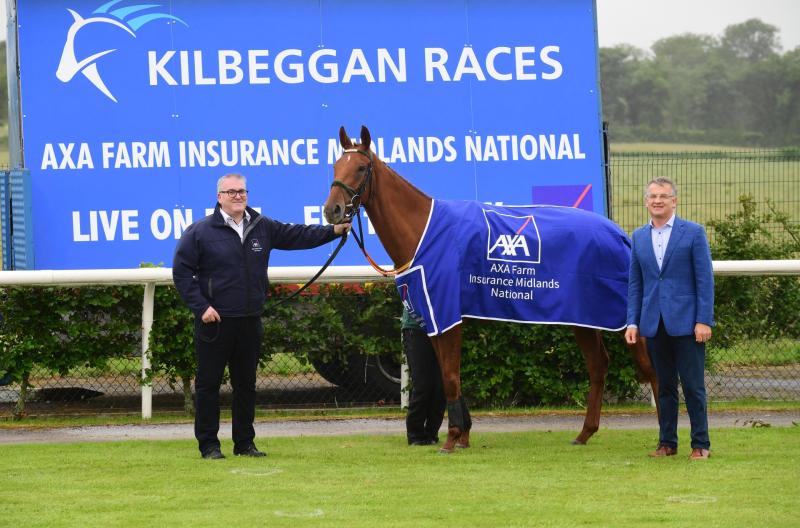 Next Friday, July 10 will see the return of the €75,000 AXA Farm Insurance Midlands National at Kilbeggan Racecourse, one of the most significant steeplechases in the summer racing calendar. The 2020 renewal marks the second year AXA, one of Ireland’s largest and oldest insurance companies, have sponsored the historic race.

RTÉ will feature the AXA Farm Insurance Midlands National in their new one-hour evening programme on RTÉ2 and RTÉ Player. The new programme will run from 7pm to 8pm and will be presented by Hugh Cahill with guest analysts joining regulars Jane Mangan, Ted Walsh and Ruby Walsh.

Paddy Dunican, Kilbeggan Manager, said: “We are thrilled that RTÉ will broadcast our AXA Farm Insurance Midlands National live on television, which gives the opportunity to all of Kilbeggan’s great supporters to watch our feature race of the year. The continued support of our sponsor AXA, one of one of Ireland’s leading insurance groups, now specialising in farm insurance, and the additional funding from Horse Racing Ireland, values the race at €75,000.”

Christy Doherty, Head of Agriculture at AXA Ireland said: “AXA Farm Insurance is delighted to continue our support of the Midlands National at Kilbeggan, only a short distance from our Agri Centre in Athlone. AXA appreciate that this has been a really difficult year for many people, but it has also brought out the best in people. We see our support for the Midlands National at Kilbeggan complementing our other initiatives such as Covid Car Cover, AXA Community Hero where we are celebrating the heroes who have made life better for their neighbours and local communities.

"The Midlands National at Kilbeggan allows us to be part of the farming community who are the backbone of the racing community across rural Ireland. We wish Paddy Dunican, Kilbeggan Racecourse and Horse Racing Ireland the very best with this popular race in the Midlands.”

Jason Morris, Horse Racing Ireland’s Director of Racing, said: “We are looking forward to a high class and competitive renewal of the AXA Farm Insurance Midlands National on July 10 and it is great for Kilbeggan and all National Hunt fans that this highly prestigious contest will be showcased live on RTÉ this year.”