... and while I'm at it! Things that caught my eye this week 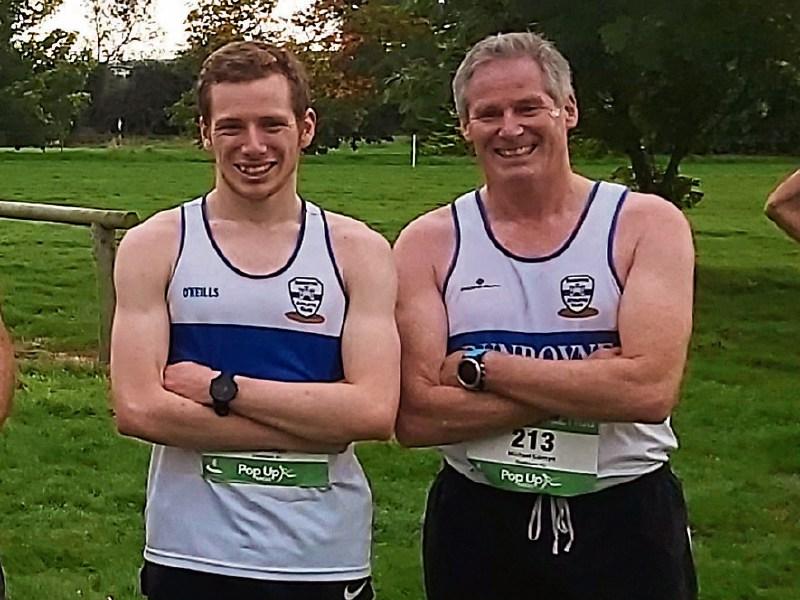 PICTURED ABOVE: Like father, like son! Ballinaglera native Michael Cornyn (right) pictured with his son Niall at the recent Meath Novice and Masters Cross-country Championships. Niall, running for Dunboyne AC, won the Novice race 28 years after his father had won the same event but Michael managed to avoid being lapped by his son as both races were run together. Also in action in the race was former Carrick AC athlete Padraig Farrell who finished third in the Over 45 race in the colours of Trim AC

As I sat down on Monday to contemplate filling the Observer sports pages this week, it almost felt as if I had stepped through some time warp and gone back to March as the county scene resumes with the very self same set of fixtures that we were supposed to have on that fateful week of March 14-15.

I was contemplating a trip to Newry on the Saturday, wondering if it was going to be worth the trouble as Down chased promotion and everyone knew that Leitrim’s big game was the following weekend against Tipperary - no change there!

Then it would be on to Bekan on the Sunday for the Division 3B Hurling Final, that superb facility that unfortunately is so exposed and wind-swept that it gives a new meaning getting blow dried!

Next weekend is a welcome return of the county game, a chance to finish up the housekeeping for the year and put us all on an even keel if, please God, Covid can be conquered, or at least subdued in 2021 and we can all get back to our lives until a cure is found.

It is going to be strange without fans but the GAA have answered the call with nearly every game in the Allianz Leagues being covered either on TV or online over the next two weekends to ensure that the most ardent fans will get the chance to follow their heroes.

It will also be a chance to see what effect the club game has on the county - we’ve all talked about the wonderful club championships the length and breath of the country. Lets see if that translates to the county game or, if as I’d still suspect, there is still quite a chasm between the two.

Either way, it makes for an intriguing weekend - the footballers head across the border for a game unlike any other they have ever played, it’ll make for good stories in the years ahead but they also travel with a cloud of uncertainty.

There are concerns, of course there are with border counties threatened with Level 4 restrictions in the last few days and it does have you wondering about the sanity of holding any games at all. But as the various outbreaks around the country have amply demonstrated, the problem is not with the games themselves or even the training but rather the celebrations and gatherings that spring up to celebrate victories.

The Covid situation in the north, among their GAA clubs, is also worrying and I wouldn’t blame players, or their families, if they were reluctant to travel. All you can hope for is that everyone follows the guidelines and nobody tries to game the system, by fielding anyone at all with a suspected Covid case.

The best of luck to our footballers and hurlers - they travel with our good wishes.

Everton blues as the Reds roll around again!

Being an Everton fan is sometimes like being a Leitrim fan - there is always a fatalism there that no matter how well the Toffees are going, that when you expect them to perform in a derby, that’s the exact time that Liverpool had them a thumping.

Sometimes the thumpings are easier to take than the games we throw away - like Jordan Pickford keeping a ball in play for Divock Origi to gratefully plant the ball in the Everton net in injury. If I was Origi that night, I’d have run out and done the Lotto because there was no way your luck wasn’t in that night.

These last few weeks have been wondrous for your average Evertonian (although the ones I know in Leitrim are far from average!) - top of the League, scoring goals for fun and world class players like James Rodriguez and Richarlison wearing the Royal Blue ... heady days indeed.

We've even topped the charts in England with “Spirit of the Blues”, a ditty from the 80s when we last stood atop the pile and the Ladies team are undefeated too! What the hell is happening???

Of course, just as we start to dream, who comes strolling along to puncture our dreams? Liverpool and not just Liverpool, a Liverpool team smarting from an astonishing 7-2 loss to Aston Villa the last time out and there is nothing better for them than rediscovering their form while bursting Everton's balloons!

So while the experts might predict an Everton victory, I firmly believe that every Toffee all over the world will be cowering in front of the TV, peaking through their fingers, almost afraid to look at the screen as Liverpool inevitably crush our dreams.

But, maybe, just maybe this year will be different. We live with cursed hope, we Evertonians, it is almost like a psychiatric condition but we'll all be screaming ourselves hoarse cheering on the Toffees.

Whatever about our new stars and Carlo Fantastic, if there is anyone in the Everton ranks who deserves a derby day victory, it is our Seamie! The Donegal maestro has rediscovered his form this season and I suspect that even Liverpool fans wouldn’t begrudge him a victory next Saturday afternoon.

Maybe it was part of the plan all along - as winter rolls around, a feast of GAA games is going to hit our screens and it will be pretty much non-stop from here to Christmas.

That is no bad thing for with lockdowns, travel restrictions and the dreaded Covid, we're not going to have our usual distractions in the lead up to Christmas, if Christmas even happens at all this year! So a dollop of GAA action each weekend right up to Christmas might be just what the doctor ordered.

The GAAGo.ie offering looks particularly good value - at a fiver a game, Leitrim fans will get to see the action from Newry or Bekan this weekend and I'm sure it will be like a communal experience for Leitrim people all over the globe, everyone together willing on their Green & Gold heroes in pursuit of glory. It could be the best fiver you spend this month!

Project Big Picture sounds like something that those with foresight and good sense would surely be in favour of but the more you delve into it, the more it sounds like a power grab by Soccer's elite clubs in England, designed to consolidate and expand their power.

Wrapping it up in concern for the survival of the lower leagues, seeking to divert funds their way and help struggling clubs stay afloat, Project Big Picture has some noble ideas but you get the sense that the main idea is to consolidate the earning potential and security of the big six, making them invulnerable in the future.

I'm sure there will be plenty of twists and turns before the end with this particular Project, you'd certainly hope all concerned see the complete Big Picture.