Sideline View: The magic of Maradona

The world's greatest footballer should inspire the next generation of stars 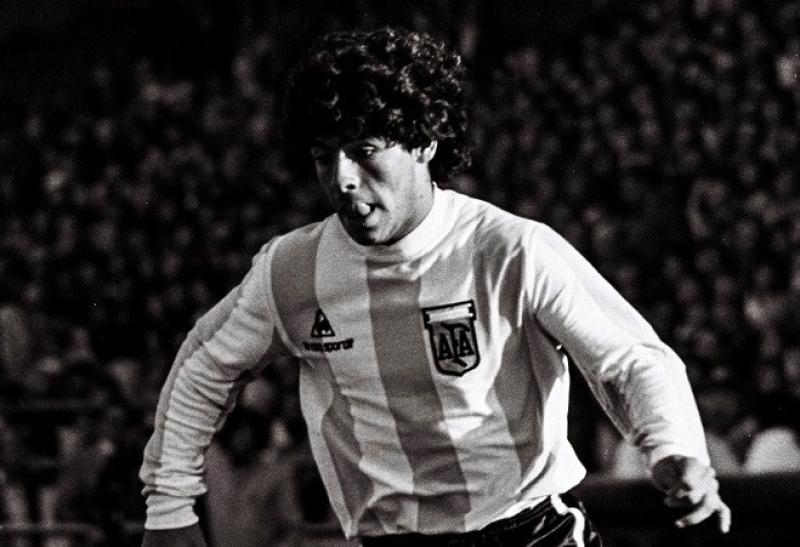 The late Diego Maradona in action against the Republic of Ireland during a friendly at Lansdowne Road in 1980 (Pic: Ray McManus/Sportsfile)

Sport is a much poorer place without Diego Armando Maradona, who died last week at the age of 60.

In my view, the little magician was the greatest footballer the world has ever had the pleasure of watching. It's as simple as that.

But, he was more than a footballer. He was an icon and it was fitting when the world's greatest ever team, the New Zealand All-Blacks, recognised that. They carried out a black number ten jersey with his name emblazoned on it before last weekend's meeting of the nations.

It's just a pity Peter Shilton, a world-class goalkeeper in his own right, didn't have the same class. Yes, Maradona cheated with his 'hand of God' goal against the England stopper. Some might say honesty is the best policy, but there is a time and a place to twist the dagger. And last week wasn't that time.

He may have had his problems off the pitch, but sporting stars should always be judged for what they do in the colosseums in which they perform.

Maradona wasn't born with a silver spoon in his mouth. Of the nine mouths that needed fed in their home in the Villa Fiorito area of Buenos Aires, his father was the only earner, allowing his family to focus on study.

It was Diego's ability to control the ball like it was an extension of his body that alerted the scouts of the local Argentinos Juniors. And so the roller-coaster was taking off.

He bagged goal after goal and soon he was in the blue and gold of Boca Juniors. In their La Bombonera stadium, which shook with sheer atmosphere on game day, he led them to the Primera División. But, after just 40 games he was off to Europe as Barcelona came calling.

The fact that he moved to one of the Catalan giants, who were 'Mes Que Un Club' (more than a club) was one thing.

What defined him for me, was how he carried the national team. That wonder goal against England in 1986 was a lifetime in the making. If you watch footage from his time at Napoli, that was the perfect grounding. Diego dragged an unfancied horse to two league titles, Italian and UEFA Cups, he was kicked black and blue. As he was in that 1986 clash with England.

Like the streets of Buenos Aires, Naples was the school of hard knocks. He literally had to dance his way around potential leg-breaking tackles and making a mockery of England was a by-product of it all.

Maradona is just one of those players that you'd love to watch in the flesh. The viral video on social media of him juggling the ball is part of his legacy. He was just at one with the ball...oozing class.

I remember trying to watch the 1986 World Cup Final from a distance in the Bushtown Hotel. On the way home from the Port, we called in for grub. I pleaded to get away from the table. By that stage, the Germans had levelled the game at 2-2. Maradona huffed and puffed all during the game, but he made the crucial play. His through ball played in Jorge Luis Burruchaga (or number 7 as I called him then) for the winner.

It's that type of instinct that separates the good from the great. And the thing about it, much of that craft is self-taught away from the training field.

I was chatting to Dermot Heaney during the week, for a feature in next week's paper. His ball-winning ability was honed from endless hours kicking the ball against a gable wall.

Unbelievable – like legend - is an overused word. It should only be used for occasions like last Sunday to describe Joe Canning's four sideline cuts over the bar. For all the great coaching he'd had access to, I'd say it was perfected on the family farm or at Portumna pitch.

Eoin Bradley's goal in Derry's 2005 qualifier clash with Down. Owen Mulligan's wonder goal against the Dub's the same year. All moments of magic.

I remember chatting to a defender who had played against Glenullin one evening. How was he supposed to know what 'Skinner' was going to do next, when the man didn't know himself.

That's the x-factor that makes all the difference. It was encouraging chatting to Damian Cassidy this week about the new proposals for Derry's coaching plan. In particular, it was the committee's research around Go Games and making them five-a-side for the very young. Why? To promote decision-making and flair.

Alleluia. This is what we have been missing. Back to the days of jumpers for goalposts and playing in the back field until either it got dark, or somebody huffed and went home with the ball.

Once you realised that the big boys were going to kick you instead of the ball, it was time to figure out a wat to play around them. The great players learn on the job, away from regimented systems where they are forced to play with one hand tied behind your back.

Thank God for Maradona. For those too young to remember him, the constant barrage of footage should inspire the next genius.