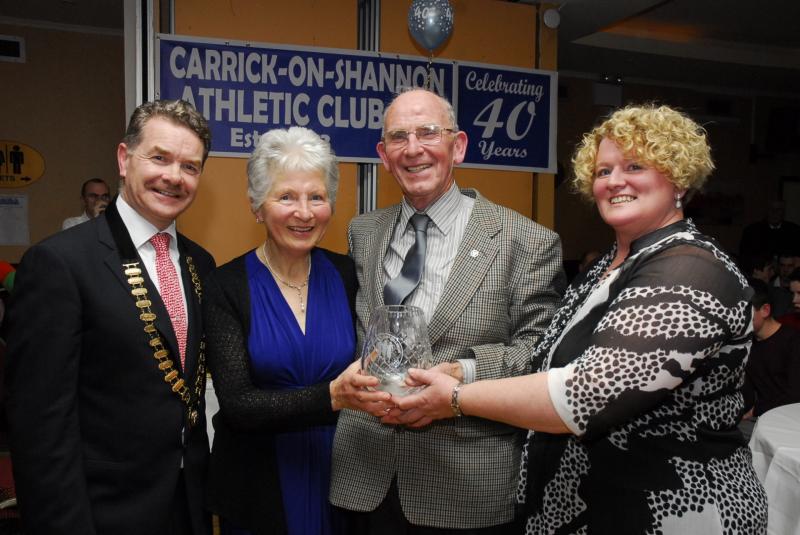 One of the driving forces behind the local club, Michael was a founding member of Carrick-on-Shannon Athletic Club in 1973 and served as a club official until the early 2000s and coached numerous athletes to success at All-Ireland level over the years and inspired countless generations of children.

Michael passed away in the early hours of Wednesday morning (April 14) at his home outside Carrick-on-Shannon and he is survived by his wife Rose, daughter Mary, sons Fergus, Gerry and Paul, sons and daughters in law, grandchildren and a wide circle of friends all over the country who got to know Michael through the sports of athletics.

A native of Leitrim Village, Michael worked for many years in the Wessell Industries in Carrick-on-Shannon and was also heavily involved in Carrick-on-Shannon Credit Union and the local community games, acting as starter for many years at the National Finals in Mosney. In latter years, Michael was also heavily involved with Carrick Active Age while many will remember him as part of a three-man team with Tom Hughes and Michael Mason who used to run the local Table Quizes in the town in the 1990s.

However, it is his lifetime of involvement with Carrick-on-Shannon AC that Michael will be most remembered for. In a tribute on the Carrick AC webpage, the club said "Words cannot do justice to what Michael O’Brien meant to our Carrick-on-Shannon AC, they simply can’t but if we can, we can try with the words of one of former chairman John Keenehan who described Michael in many of his addresses to our AGM as simply a legend – never was a word a more apt description for Michael.

"One of the original founders of our club way back in 1973, Michael must have filled every role there was to fill in the club. Club Secretary for 25 years, club chairman, church gate collector, Connacht official, starter at Leitrim, Connacht and National events, chief organiser and track marker of the fondly remembered Carrick AC Sports, if there was a job to be done for the Club, Michael did it and did it to perfection because, for Michael, if a job was worth doing, it was worth doing right.

"But it is as a coach that generations of Carrick people will remember Michael and it was his greatest love. We can talk of all the All-Ireland medallists and internationals he coached, all the successes he brought to our club but that wouldn’t do justice to Michael, for he was just as proud of the efforts of the youngest child trying their best in their event," said the tribute.

Michael is survived by his wife Rose, daughter Mary, sons Fergus, Gerry and Paul, sons and daughters in law, grandchildren, family and friends and a vast circle of friends. Funeral arrangements will be announced in the coming days.

On behalf of the Leitrim Observer, may we offer Michael's family and friends our deepest sympathy on their great loss. May Michael Rest In Peace.