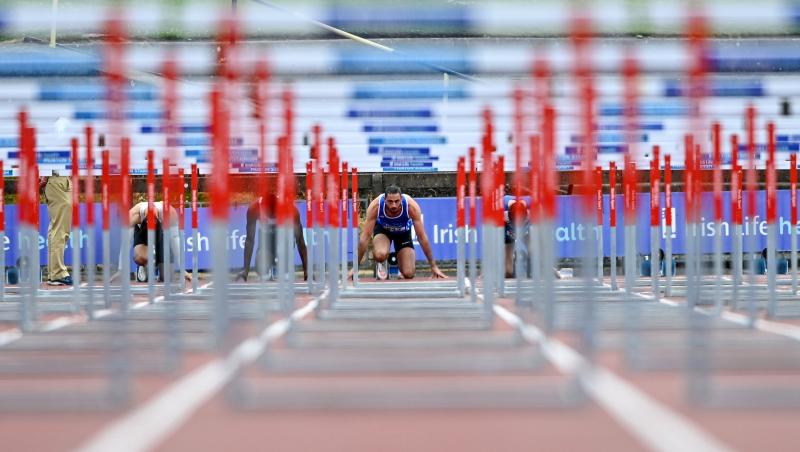 Carrick-on-Shannon AC's Gerard O'Donnell produced his trademark flying finish twice on Saturday morning to win both his 110m Hurdles races at the AAI Games in Morton Stadium in Dublin.

With two races with little over an hour between them, Gerard left it very late to get past Crusaders Matthew Behan in the first race, clocking 14.24 to Behan's 14.29 with a 1.6m/s wind behind them. The Carrick AC runner only got by his rival over the final hurdle in a close race to the line.

In the second race, Behan got another blistering start but O'Donnell caught him much earlier with a blistering second half of the race, clocking 14.10 to Behan's 14.30, although the wind of plus 3.5 m/s rules it out for record purposes.

Also in action on Saturday was Gerard's Carrick AC teammate Ellis Conway who finished fifth in heat 2 of the Women's 800m, finishing strongly over the final 200m to clock a season's best of 2.19.39.

Sunday sees O'Donnell entered for the Men's 100m along with fellow international Eanna Madden, although the Mohill man is nursing a strain at the moment while Mohill's Alannah McGuinness runs the women's 100m. The Leitrim contingent is completed by Cathal McElgunn (Carrick AC) in the Men's 400m.