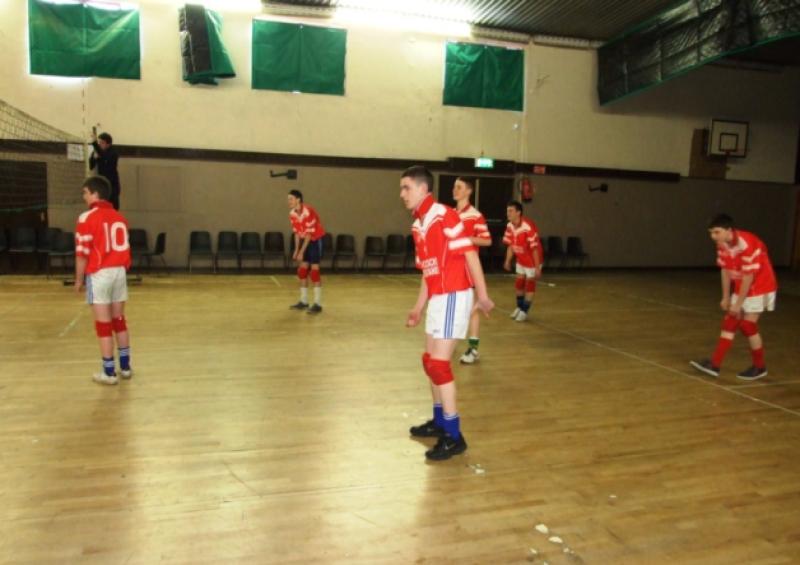 Brigids Loughrea came with their double Junior champions of last year so Drumshanbo were well pleased to hold their own with them and participate in very exciting sets.

Brigids Loughrea came with their double Junior champions of last year so Drumshanbo were well pleased to hold their own with them and participate in very exciting sets.

It was Drumshanbo As and Cs vs Brigids As and Cs and, perhaps most pleased were Drumshanbo’s C who nearly stole the show. They got to set point against Loughrea As.

After Drumshanbo A had duly beaten their Cs in the opening set and, had an 8-0 lead in the second set, Drumshanbo Cs suddenly came to life and fought all the way to the end.

Then, facing Loughrea A and trailing 2-5 immediately, they stunned the visitors by taking the lead at 17-14, thanks to classic flicks and spikes going straight down from Brian Keaveney. Normality seemed to be restored when Loughrea led 21-18 only for Brian Moran to set up Kevin Lynch for aggressive winners and Drumshanbo took the lead at 23.

They then got three set points before Loughrea pipped them at 28 in a set that gripped all.

Loughrea led most although it was level at 10, 15 and 16. When behind 22-17 Lewis Norrington made a great save and hit a run of serves to bring Drumshanbo so close at 23.

A 5-0 service lead from Lynch ensured a permanent lead for Drumshanbo in the second set with Adam McCarthy defending best and the Cs had won an important point.

The climax of the day was the meeting of the two A teams and it was worth waiting for.

Drumshanbo started the better but some stunning Loughrea serves gave them a big lead at 13-8 which they held to 23-20 except for ties at 14 and 17.

Drumshanbo changed all first six players for the second set while Loughrea left one on and surged ahead on two occasions to lead 15-11.

Fergal Guihen’s serve then caused havoc and strong receiving from Sunbeam Feng had them level at 22 but the game was tied.

Still, with all the panel used each game, only one set dropped and no team training done, Drumshanbo A will fight hard in A again for the 26th consecutive year.