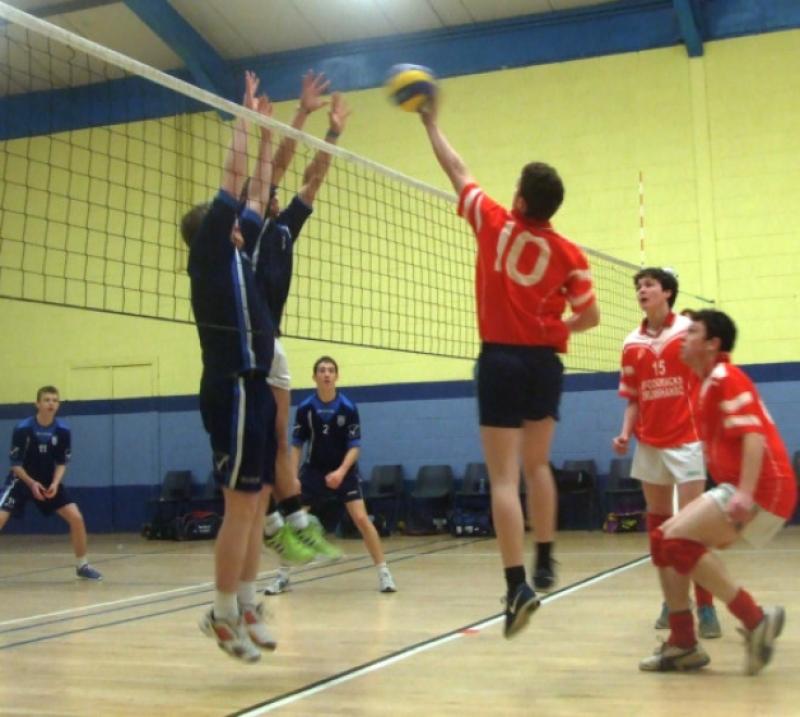 A shock first senior A win over a Loughrea school in nine years has put them in the national senior A semi-final for the schools 20th time in 23 years. Moreover the win will give them huge confidence approaching that semi-final.

Such is the resilience of this ever improving Drumshanbo team, that an outstanding first set from a Brigid’s team with European experience did nothing to daunt them as they led at many times in an exhilarating second set.

With the game poised delicately at 21-20 for Drumshanbo, an outstanding dump from Michael McCormack appeared to send the holders into disarray only for Drumshanbo players to think they had the point won.

Shocked by their misjudgement they gave away an easy next point to allow Brigids to sneak to top of league.

In the first set an error ridden Drumshanbo gave the holders an early lead and then Brigids gave a magnificent display of variety of attack that opened up a massive lead. But just at the end of the set Drumshanbo were beginning to read them.

Brigid’s opened strongly in the second but, set by Jordan Earley, Kevin Moran (Murhaun) spiked a winner and hit aces that turned the game in his favour. Brigid’s powered back to lead 15-12.

Then a classic Alan McTigue to Earley to set up a Moran spike winner started a purple patch. McCormack’s block took the sting out of Brigid’s power. Drumshanbo won a huge rally at 15-17 and Owen Dolan dominated in defence and hit cracking aces.

In two nail-biting tight All Ireland semi finals last year in senior and cadette, Drumshanbo had Raphaels on the ropes but lost.

After a resounding Drumshanbo first set win last Friday Raphaels duly battled to the end of second set but the same Drumshanbo boys could now celebrate.

Drumshanbo came into their final league matches looking less impressive than Elphin and then saw Elphin dropped all sets against the two Loughrea schools. But at three-all in the first set, Drumshanbo just took off.

Jacek Ozdobinski passed into Earley who set set up McTigue for a clean winner. Burning Dolan aces shot them 8-3 ahead. However Elphin had a similar lead in their match only to see Raphaels come back.

There was a crucial 53 touch rally at 13-8 with Ozdobinski and Moran deeply involved. McTigue then killed them with an ace. In fact Drumshanbo errors prevented an even bigger win.

From last year, Drumshanbo knew Raphaels were not finished. The sides were level in the second set 14 times with Raphaels leading most of the way up to 15. In fact only for two good service runs from Earley, Drumshanbo would have been well behind.

Ozdobinski aces finally opened a gap, with Moran prominent in retrieving and attacking. Raphaels fought furiously but it took them 100 touches to break down the Drumshanbo defence for two points, the second saving a match point. McCormack’s cover frustrated them and Drumshanbo gained a great victory.