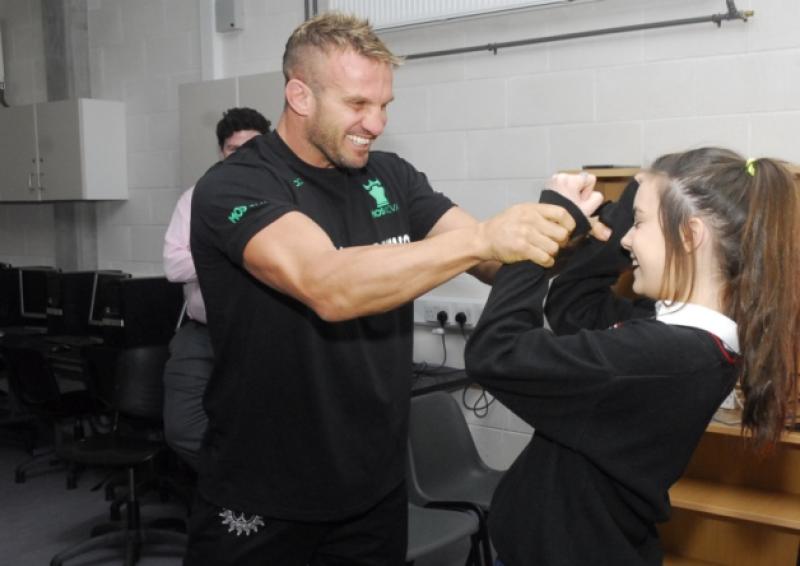 Students in Mohill Community College were given a lesson of a different kind on Thursday last when eleven time Muay Thai World Champion Nathan ‘Carnage’ Corbett visited the school to give a talk on his chosen discipline.

Students in Mohill Community College were given a lesson of a different kind on Thursday last when eleven time Muay Thai World Champion Nathan ‘Carnage’ Corbett visited the school to give a talk on his chosen discipline.

Nathan was invited to the school by close friend Ciaran Mitchell who originates from Drumlegga, Cloone. Nathan, born in Hamilton, New Zealand but who fights under the Urban Fight Gym in Australia’s Gold Coast, is in Ireland to host a seminar and workshop at UFC star Conor McGregor’s gym in Dublin before doing likewise in a martial arts club in Newry.

Nathan spoke to the students for an hour and a half on Thursday last and even gave them some hands on tutorage - much to the delight of those in attendance.

The rules of Muay Thai are very similar to those of the UFC, only that it is a standing sport so no ground grappling is allowed. The disciplines that many UFC fighters use are taken from the skills which Muay Thai teaches.

This is Nathan’s first visit to Ireland where he has quickly warmed to some local traditions. “It’s lovely so far. We came here on Wednesday and have met some great people. I’ve had my first pint of Guinness and my first taste of Cloone boxty and soda bread which Ciaran’s mum made.”

With the rising popularity of martial arts in this country, much of which is due to the soaring profile of the afore mentioned Mr McGregor, Ciaran says Muay Thai is being swept along with the rising tide. “Muay Thai is getting bigger in Ireland, no doubt about it. In the north, the east coast, and in Munster particularly, it’s huge and it’s spreading west.”

Unofficially retired for now, Nathan claimed an incredible eleven world titles in ten years, the first of them coming in the form of the WMC Muay Light heavyweight World Championship in 2003 and the latest one being the 2013 WKN Heavyweight World title.