World bronze for Michael in Lyon 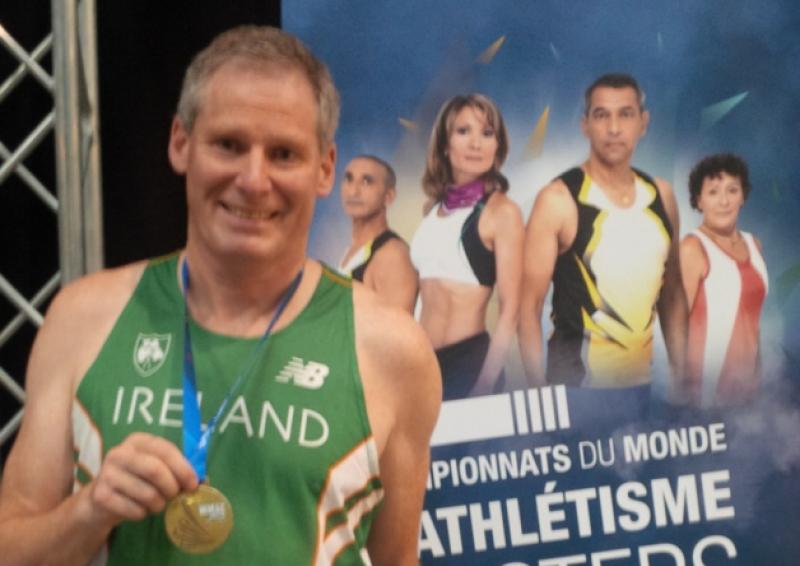 Ballinaglera’s Michael Cornyn claimed a bronze medal at the World Masters Athletics Championships in Lyon recently as part of the Irish Over 50 Cross-country team.

Ballinaglera’s Michael Cornyn claimed a bronze medal at the World Masters Athletics Championships in Lyon recently as part of the Irish Over 50 Cross-country team.

Michael, who runs in the colours of his adopted Dunboyne AC in Meath, teamed up with Mick Traynor and Tom O’Connor as they held off Russia by just 40 seconds to claim the bronze medal, missing out on silver by 20 seconds.

As Michael himself put it, the former North Leitrim AC member travelled from the foot-hlls of the Sliabh an Iarainn mountains to the foothills of the Alps in Lyon with the 70 plus Irish team for a championship which featured over 8,000 competitors from 114 countries.

Running in the middle of the day, the event featured approximately 300 runners in age categories from 35 to 55 for the last race of the day and as the race progressed, it was the Irish who were setting a sizzling pace with Mick Traynor upfront, Tom O’Connor running an excellent race and Michael running strongly just a short distance back.

With a four lap circuit and huge Irish support from runners in the earlier races that morning all the Irish continued to gain places as the race progress. On the last lap, Tom & Michael gained valuable places but the Irish team finished superbly with Mick winning individual gold in 25 minutes, Tom running an excellent time of 29.30 & Michael with one of his best runs of the year in 32 minutes.

The Irish team then had an anxious wait for a couple of hours for the official results but the Irish team worked out that favourites France had won team gold with Spain just 20 seconds ahead of the Irish in second.

Crucially Ireland pushed Russia back to fourth placed by 40 seconds when the time of the first three finishers of each team were combined.