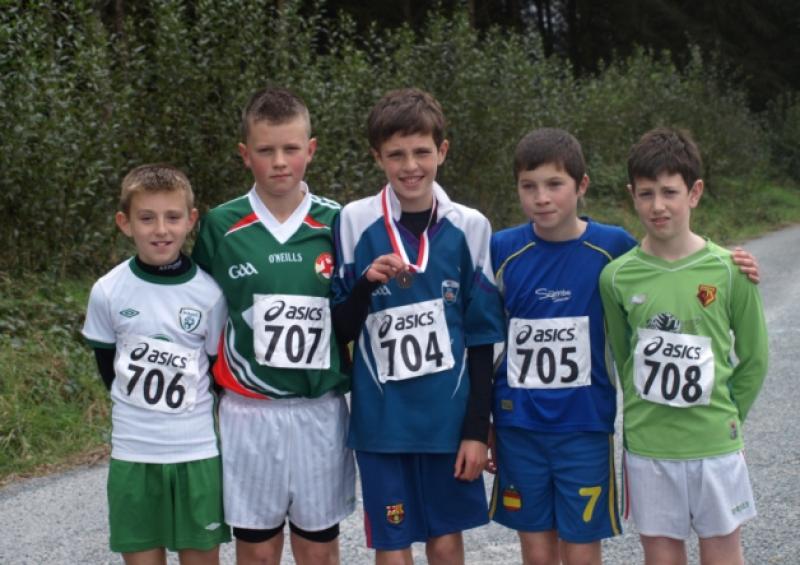 The Walks competitions got the programme off to a start. These were held on an enclosed road circuit adjacent the school and provided some very stylish walking. The Girls race was won by Roisin Clarke of Ballysadare who was followed home by Sinead McNabola and Rachel Stenson of St Manchan’s, Mohill.

With Chloe Mulligan fifth and Lorraine Foy sixth St Manchan’s won the team award with 16 points, ahead of Mercy Sligo on 34 points.

The Boys’ event was won by Eoin Gaffey of St Manchan’s with Fionn O’Brien of St Bridget’s, Drumcong third and he led his team of Peter Winters, Aidan McCormack and Dylan Easterbrook to team victory with 25 points.

Ella McDaid of Drumlease ran a great race to take third place in the Junior Girls cross-country in the huge field of 119 runners. Another great performance was that of Sarah Brady of Largy who finished 12th and, more importantly, in the medals. Leitrim school placings were St Clare’s 10th, St Manchan’s 13th and St Caillin’s 14th.

Two Leitrim athletes were among the medals in the Senior Girls race with Alannah McGuinness of St Manchan’s eighth and Ellie O’Rourke of St Caillins in 12th position. St Caillin’s were ninth on 216 and St Manachan’s 10th on 227.

The event has been run annually since March 1976 and last Saturday’s must have been one of the best, if not the best, organised of that long time. The large organising team was led by Padraig Farrell who was until recently a long standing member of Carrick AC and is now Chairman of Longford AC.

Teams are of maximum six with four to count for Under 11 and Under 13 and three for the other events. Medals for first three teams and individuals. Entry fee €4 per athlete. Entries will be taken at St Felim’s dressing rooms where dressing accommodation is available. The Sports Hall will not be available this Saturday.