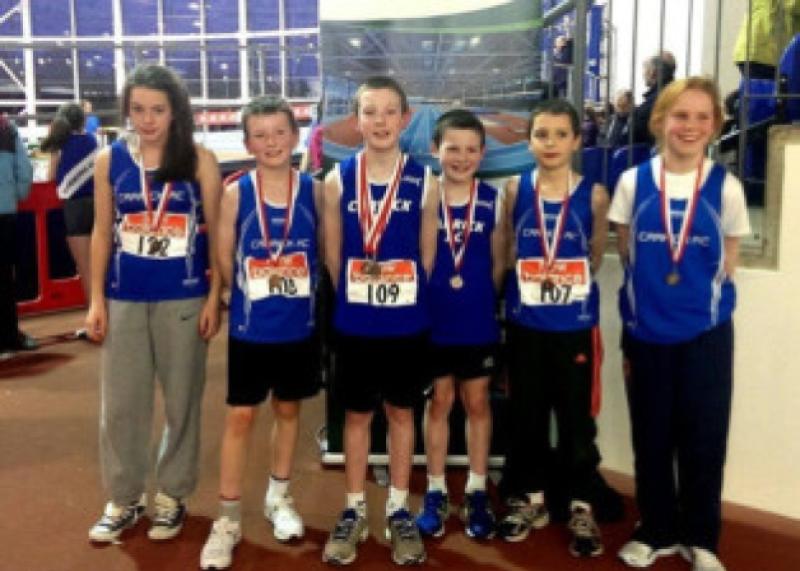 Brian Finn set a new pb of 1.55 to win the U16 High Jump before going on to win the hurdles. He completed his medal collection with a bronze in the long jump.

Callum Whelan was another gold medalist, winning the U17 shot with a new personal best while his Carrick AC clubmate Stephen McDermott cleared 1.70m to win the U17 High Jump.

Mohill & District AC’s Alannah McGuinness underlined her potential with another impressive win in the U16 60m Final, an event that featured well over 60 competitors on Saturday during a packed programme.

Ballinamore’s Sibeal Reynolds was another gold medal winner for Leitrim, in the U16 Long Jump while she also finished third in the 200m. Her clubmates Ciaran Kenny (U16 1500m) and Ciara McGoldrick (U15 Shot) both claimed bronze medals on Sunday.

Carrick AC also saw bronze medals on Saturday for Caitlin Surlis (U13 Shot), Roisin McGrenaghan (U14 60m Hurdles) and Oisin Kearney (U13 Shot) and Mollie Crossley (U18 60m Hurdles) on Sunday. Cathal McElgunnwon the Senior 200m and medalled in the 400m while Christina Beirne was fourth in the U17 60m Final as was the Carrick AC U12 Girls relay team.