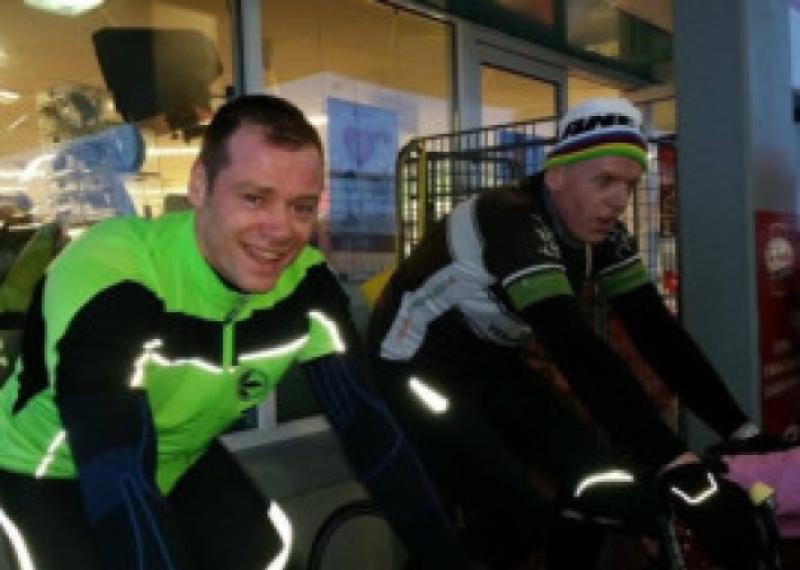 Over €1,000 was raised in aid of the North West Hospice at the weekend as the ‘Leitrim Lads’ took to their trainer bikes in Tullaghan.

Over €1,000 was raised in aid of the North West Hospice at the weekend as the ‘Leitrim Lads’ took to their trainer bikes in Tullaghan.

Jonathan Costello, Kinlough and Karol McNern, Tullaghan took on the arduous task of cycling while stationary for six hours, between 11am and 5pm on Saturday last, February 14 at Rodgers’ Filling Station in north Leitrim.

As reported in last week’s Leitrim Observer, the duo are undertaking an exhausting 800 kilometre journey from Mizen Head to Malin Head before returning to Kinlough, all in the space of just three days.

The pair will then donate every cent they rise to the Hospice which provides specialist care to those living with life-limiting illness in the region.

And while many were enjoying their Valentine’s Day, the only thing on Jonathan and Karol’s mind on Saturday, was their turbo trainers which were stationed on the forecourt of the shop.

The day remained dry and sunny and while the going was tough at times, plenty of well-wishers arrived on the day to support the lads.

Both Jonathan and Karol have acknowledged the help and support they both received on the day from volunteers, sponsors and those who donated. They have also thanked David Rodgers for allowing them to use his forecourt. They wish to extend their gratitude especially to Paula, Natasha, Ben, Simon, Jill, Mikey, Eugene, Lisa and Daniel.