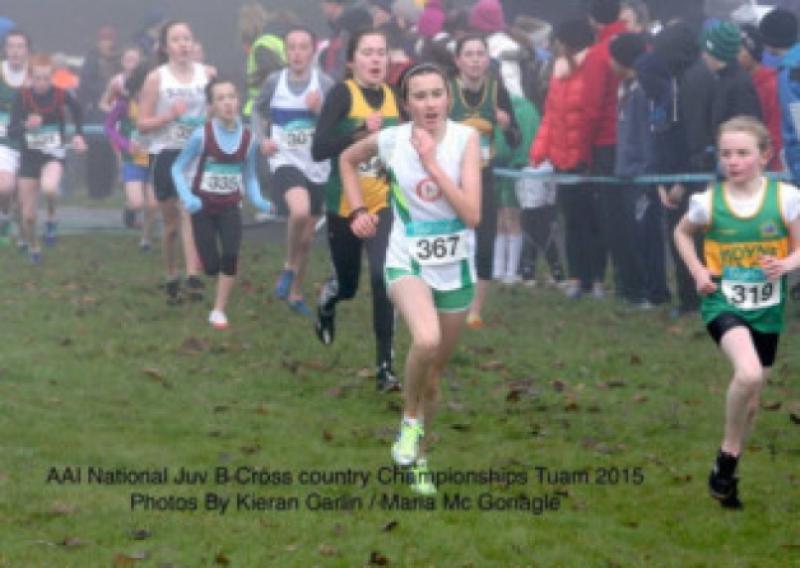 Erin Somers was the top Leitrim performer as she finished an excellent ninth in the U11 Girls race at last Sunday’s GloHealth Master, Intermediate and Juvenile B Cross Country in Tuam.

Erin Somers was the top Leitrim performer as she finished an excellent ninth in the U11 Girls race at last Sunday’s GloHealth Master, Intermediate and Juvenile B Cross Country in Tuam.

Almost 1,000 athletes were treated to a real cross country test over the rolling hills of the Palace Grounds in Tuam and North Leitrim AC’s Erin Somers was the county’s outstanding performer on the day, finishing a fantastic 9th place in the U11 girls race, winning an All-Ireland medal in the process.

Erin showed true grit and determination and was always in contention from the start. She was followed by a much improved performance by both Emily Conlon in 33th and Ellie Filan in 61st place. Ella Foley unfortunately twisted her foot and was unable to finish the race.

Hugo Filan from North Leitrim AC showed a return to form with an outstanding 29th place in a very competitive U11 boys field. Hugo was up with the front runners for the first half but just fell back a little towards the end.

The North Leitrim AC U13 girls team also showed great improvement with a fine finish for all four girls. Ella McDaid 44th, Sarah Brady 54th and Lara Mulvaney 56th made the running and only finished a few meters outside the medal positions in a tight finish.

Rachel Conlon came home in 75th position in field of over 100 runners. The team finished a creditable 11th in the club competition. Also in the U13 Girls race were the Ballinamore AC duo of Ellie O’Rourke who finished in 33rd place and Kate Gilheany in 61st. Leitrim finished up fourth in the County positions.

The county’s five clubs attended last Thursday’s AGM of th Leitrim County Board AAI in Carrick-on-Shannon which saw the end of an era when Ballinamore’s Padraig Griffin stepped down as an officer, having served the board for fifty years.

Chairperson Patricia Griffin welcomed all the delegates and had a particular welcome for Drumshanbo which were represented for the first time in almost twenty years. She complimented all the athletes who took part in competition and particularly those who achieved success at national level.

Patricia singled out Laura Reynolds who continues to perform so well at international level and both Eanna Madden and Gerard O’Donnell who won titles at the National Senior Championships in Santry last July. She also complimented Liam Feely for his achievement in the Dublin City Marathon and Patrick Montgomery who did so well in the National Underage Cross Country Championships before Christmas.

Mary O’Donnell (Carrick-on-Shannon) was confirmed at Leitrim County Board representative on the recently reconstituted Sports Partnership.

The County Board decided to set up a sub committee of one representative from each club to examine and make representations to it on structures and organisation within the county.

The meeting was addressed by Declan Boyle, Co-Ordinator of Leitrim Sports Partnership, who outlined arrangements for this year’s Primary Schools Sports Hall Competition.