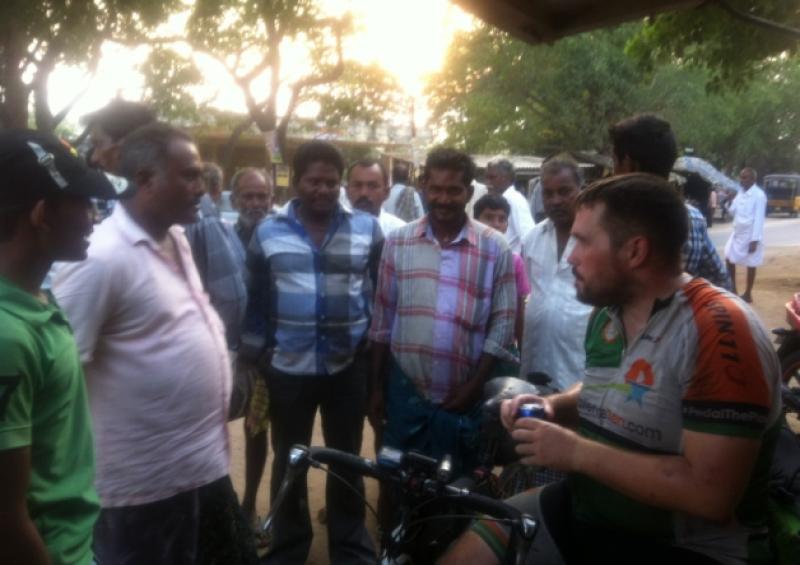 The first time I saw Kolkata on a road sign here was when it was followed by four digits. Not just any four digits but specifically they told me I had 1,814 kilometres to cover before I’d get to my India departure point.

The first time I saw Kolkata on a road sign here was when it was followed by four digits. Not just any four digits but specifically they told me I had 1,814 kilometres to cover before I’d get to my India departure point.

The numbers are scarily big here, but then everything is big, the population, the noise, the smell as well as the distances between towns and cities.

1,814 kilometres is longer than eleven trips from my home in Leitrim Village to Dublin. Eleven trips. Without leaving the country, in fact barely making an indent into the country at all. Just along a portion of the east coast.

The last three days have been dominated by both the abundance and absence of electricity. A power worker’s strike in the state of Andra Pradesh where I have covered more than a thousand kilometres over the last week or so has caused widespread blackouts with power available anywhere. Most businesses are trying to operate as normal but with entire towns in darkness it’s a pointless exercise.

At the other end of the spectrum, the last few nights have been filled with electrical power, not in the power lines but in the atmosphere. The midnight skies have been lit up by lightening with the accompanying rain and thunder as a cyclone passes through this part of India. It cost me Sunday on the bike but thankfully I’ve been moving again since.

I’m hoping to reach Calcutta and my scheduled flight on Sunday. My planned destination is Bangkok but in light of recent political developments in the Thai capital, it may change.

During the past two months in India I’ve had some fantastic experiences, the country is absolutely beautiful, the people are friendly and welcoming although trust no one with money here, everything is cheaper than at home, the food is unbelievable but me being a Irish country guy I haven’t sampled as much as I should have.

I will be glad to get on my way out of India, the heat is becoming unbearable reaching 51 degrees at one point. The average temperature ranges from 35 to 42 for most of the day. For comparison Ireland’s hottest day on record was 33 degrees.

The attention on the roads and at rest stop, where crowds would congregate, was entertaining for a while but I’ve had my fill at this point. I’ve started just dreading a brake light on a motorbike that’s just passed me.

I don’t mind the people who stay at my pace and ask questions, but the guys, and they have been exclusively male, who either stare or take pictures and say nothing before pulling off again are really beginning to get annoying.

Next time I check in I should be somewhere on route between Bangkok, Kuala Lumpar and Singapore.

If you want to get regular updates check ‘Pedal The Planet’ out on Facebook.