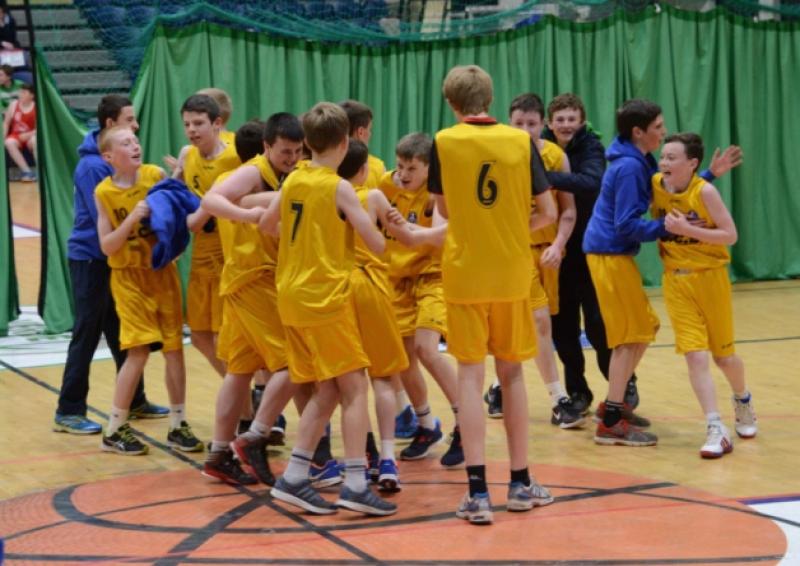 Playing both the semi-final and final on the one day, the Leitrim school displayed great nerves to win both games by a single score and their semi-final victory came thanks to a buzzer beating last gasp shot that took Carrick into the final.

Carrick went through their ten game season undefeated, beating powerhouse St. Gerard’s of Castlebar in the North West Regional Final before going on to win a three-way qualifier playoff against Dunmore Community School and Thurles CBS in Dunmore.

The Galway school were dispatched 25-13 with a more comprehensive 29-6 win over the Tipperary men to set up a meeting with Kildare’s Piper Hill College in the Semi-Final.

Carrick, who had excellent performances from captain Donal Casey, Oisin bohan, Jack Flynn and Paul Keaney, showed their fighting spirit when the impressive Shane Crowe popped up with the winning basket with an excellent lay-up just 35 seconds left on the clock.

The drama didn’t end there as Piper Hill robbed possession before Carrick got the ball back to seal their place in the Final against Scoil Mhuire Gan Smal Blarney from Cork.

In contrast to the semi-final, Carrick started well and led the game by 20-14 at the halftime break with Oisin Bohan leading the way with six points, Paul Keaney and Kevin Brady grabbing two baskets each and two points apiece for Donal Casey, Shane Crowe and Jack Flynn.

Carrick continued to dominate in the third quarter but Blarney mounted a fantastic fightback during the second half as they drew level with the Leitrim school. Shane Crowe, however, kept the Carrick lads in control with five second half points while Paul Keaney also weighed in with two vital baskets.

With pressure growing, David O’Connell emerged the match winner as, with his first scores of the final, he scored a basket and then sunk a free-throw to seal a 32-30 victory for the Leitrim school.