Drumshanbo nearly cause upset with mixed fortunes for other teams 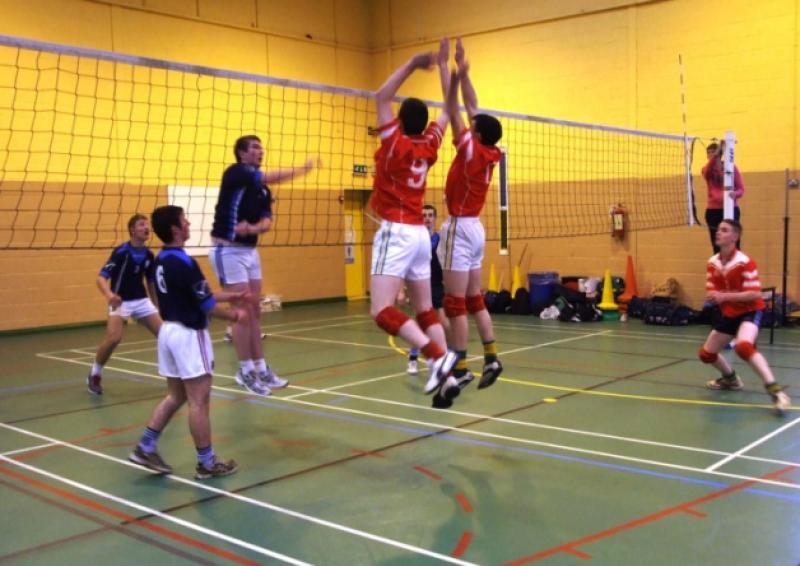 Drumshanbo Senior As got off to a convincing start when they competed in the seeding blitz in Loughrea.

Drumshanbo Senior As got off to a convincing start when they competed in the seeding blitz in Loughrea.

In the first match, Drumshanbo faced reigning All-Ireland champions St Raphael’s of Loughrea. In the first set, Drumshanbo were more than able to compete with Raphaels. Eight times Raphaels led only for Drumshanbo to level who stayed in the match due to some excellent blocking from Jordan Earley, and great Owen Dolan spikes.

Drumshanbo were a point away from claiming the first set at 25-24 but Raphaels came back and won the set 27-25.

In the second set, Drumshanbo fell 10-16 behind. Some brilliant flicks by Barry McNama helped them to level. Drumshanbo players never lost belief and won the set in a thrilling finale 26-24. In the final set Drumshanbo got off to a very slow start of 1-9 down. Drumshanbo couldn’t find another comeback.

Next Drumshanbo faced Fethard and started with some marvellous spikes from Alan McTigue. Fethard led from 13 all the way to 23-19 but in a tight encounter Drumshanbo won the first set 25-23.

Crucial to the win were Diarmaid McKiernan’s consistent serving. Drumshanbo got off to a better start in the second set, leading the set for the whole way. Some excellent spikes from Michael McCormack were key.

In the last match, Drumshanbo faced St Brigid’s of Loughrea. Drumshanbo gave it all in the first set but the very talented home side made no errors. Despite this Drumshanbo believed and kept pace with Brigid’s all the way.

After a very tight second set, Drumshanbo proved they were more than capable of matching the best, and if they keep producing some great performances like this the season ahead looks very promising.

Drumshanbo B & St. clare’s both impress

The Senior B Boys seedings group opened with the all Leitrim clash which ended in huge excitement. All rounder Joseph Baxter hit 13 serves in a row to open a massive Drumshanbo lead in the first set.

The set saw great combinations from Michael Rynn to Ciaran Walsh. However Manor fought all the way after the early disaster with aces from Conor O’Hagan, net pouncing from Niall Gallagher and a spike winner from Joe McMorrow.

In the second set, John Crawford’s serve equalised at three but Manor raced 14-4 ahead, helped by Sean McPartlin aces, and held the lead to 15. Opportunist flicks from Donal McNulty and digging saves from Kevin Prior got Drumshanbo back level. The set was level 10 times from there to the end with Manor saving the first set point but not the second.

Against Kiltimagh, Manor again fell behind and fought hard later in first set. In the second Manor lead all the way to set point before losing the last three points.

Against Drumshanbo, Kiltimagh led all the way from there in the third game of the day. However Drumshanbo made several comebacks, thanks to good positioning and reading from Kevin O’Connor and a variety of attacks from Walsh. Lubo Schusterovi played a central role with one spectacular dive.

In the second set Kilti again led all the way but Drumshanbo staged great comebacks and, thanks to steady play from Patrick Meehan and Fergal McWeeney, caused a timeout at 20-23.

St Louis Kiltimagh beat Drumshanbo 22-25 25 20 26-24: After a topsy turvey match, where Drumshanbo had raced ahead in the final set of the Senior Girls last 16 clash, Kiltimagh saved a match point and held their nerve to win by the narrowest of margins.

Early on a spectacular stretch from Leah Egan showed the range of Drumshanbo talents. Drumshanbo led 6-2 early on, but as Kiltimagh levelled at 7, Aideen McKiernan and Lauren Wynne came on and Ailish Barry served Drumshanbo into a lead they never lost.

Morgane Debout-Fevrier & Heather Moore started the second set and before they settled Kiltimagh were 9-4 ahead. Good passing from Lorraine Beirne set Paula Gilmartin for a spike and set off a run to see Drumshanbo lead 16-14 but Kiltimagh finished strongly.

A run of serves from Rosemary Gilrane started a great Drumshanbo spell where they led 13-8 at the change of ends. Kiltimagh again played better but Michelle Monaghan went on her fourth run of serves of the day and soon Drumshanbo had their match point before their late heartbreak as Kiltimagh came from behind to claim victory.