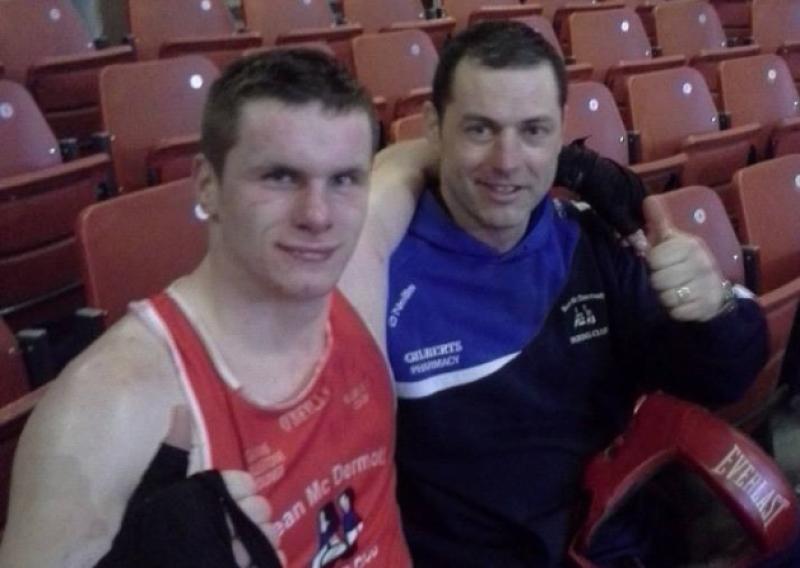 Manorhamilton’s Seán McDermott Boxing Club will have no less that three of its fighters challenging for Irish titles this weekend in Dublin’s National Stadium.

Manorhamilton’s Seán McDermott Boxing Club will have no less that three of its fighters challenging for Irish titles this weekend in Dublin’s National Stadium.

Rossinver’s Sean Kilkenny will take on Carrickmacross’s Glen Clarke in the Irish 67kg Novice final on this Saturday.

Niall Gallagher from Creevelea will box Shane Ward Titans BC, Galway in the All-Ireland Youth 91+kg final on Friday.

It’s the first time in the Club’s 74 year history that three members will contest All-Ireland championships finals in the same year, a fantastic achievement for the Manor club.

Huge credit for this has to go to the two Club coaches, John Gilligan and James Kelly. John has been involved in the Club for well over 20 years and James is of course himself an All-Ireland champion.

James is working with the Club full time now, thanks to a local FAS Community Employment Scheme. He has developed a great relationship with the boxers and it’s fantastic to see all his hard work paying off.

On his way to the Novice 67 kg final, Sean Kilkenny defeated Darragh Moore Corpus Christie BC, Limerick in the semi-final on Friday. It was a cracking contest, three tough rounds and Sean won in the end on a split decision.

Niall Gallagher beat Darragh Darcy, Tobar Pheadair BC, Galway in Saturday’s Youth 91kg+ semi-final. Niall started the bout really well and had an excellent first round which saw him ahead on all the judge’s cards.

Darcy, however, picked it up towards the end of the second round and as a result it was all to box for in the last round. Both lads went for it hell for leather in the last round but Niall’s fitness took him across the line and earned him a place in Friday’s All-Ireland final.

Killargue’s brave Martin Feeney was beaten in the Youth 64kg quarter-finals by Frankie Ward Titans BC, Galway. Feeney nevertheless performed very well when boxing for his first time in Dublin.

The national boxing finals start on Friday night at 7pm (Youth) and on Saturday at 11am (Novices).

Good luck to all the boxers over the coming weekend and we are extremely proud of each and every one of you.