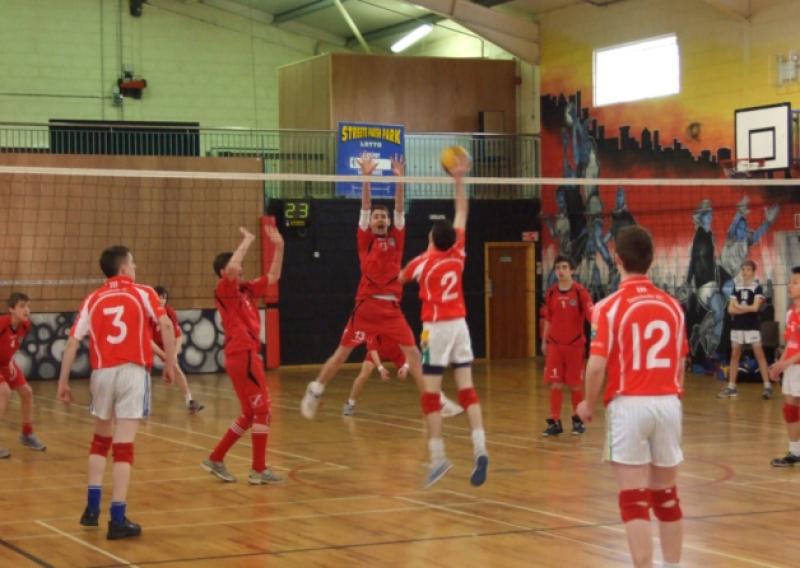 Brave Drumshanbo put everything on the line in an effort to advance to the All Ireland final but narrowly missed out at the hands of their rivals St. Raphaels of Loughrea.

Brave Drumshanbo put everything on the line in an effort to advance to the All Ireland final but narrowly missed out at the hands of their rivals St. Raphaels of Loughrea.

After a slow start the drama unfolded before onlookers eyes in the final set.Most of the teams early points came from missed serves but when there was a good rally at 6-8 in favour of St Raphaels the game slowly came to life. Kevin Moran had a good spike but serving remained bad until Jordan Earley scored three in a row.

After a timeout Callum Moore hit two pin-point spiking winners and this time it was Sunbeam Feng’s turn to serve. Feng had now built up a reputation for his serving quality and added to it by scoring five serves in a row.

Unfortunately this wasn’t enough to pull through as St Raphaels got the next three points to win the set 22-25.

The second set was much more lively than the first. Drumshanbo needed to win the set. They started off well but Raphaels came back as the teams swapped points and when there was four between the sides at 13-17, Conor Prior stepped up to the mark to serve and had a brilliant run of serves, with a new float jump serve bringing his side to 21.

Under serious pressure, Drumshanbo’s defence was spectacular and really dealt well with Raphaels strong hitting and spikes. Raphaels scored three unanswered points but Gareth Higgins and Jacek Ozdobinski helped them edge up to 16-24.

Yet another rally proved that Raphaels were determined but Drumshanbo soon got their final point and finished off the set strong winning 18-25. It was much better play from Drumshanbo with good performances from Moran, Prior and Higgins.

Now it was one set each and both teams knew what was at stake. Drumshanbo built up a strong 6-3 lead with six serves but Raphaels fought back.

Despite a brilliant Higgins block and another good Moran spike, Raphaels pulled away but Drumshanbo, trailing by four, rallied and brought on Caleb Duffy as all the Galway school needed was one point for the set.

There was no room for error but Duffy didn’t seem to show any sign of nerves. His serving was exemplary and he hit three in a row and brought the deficit down to one.

Again Drumshanbo’s defence was impeccable, Ozdobinski’s defensive skill particularly shone as he wasn’t afraid to dive on court to ensure that the ball did not touch the ground.

Drumshanbo were on the verge of doing the impossible but Raphaels weren’t going to let that happen.

A disappointed Drumshanbo team could hold their heads high as they had a brilliant performance and when things seemed bad they didn’t give up and it almost paid off. Their performance reflected all the hard training they put in throughout the year and would have been worthy winners but sometimes that extra bit of luck is needed and it seemed to be with Raphaels on this occasion.