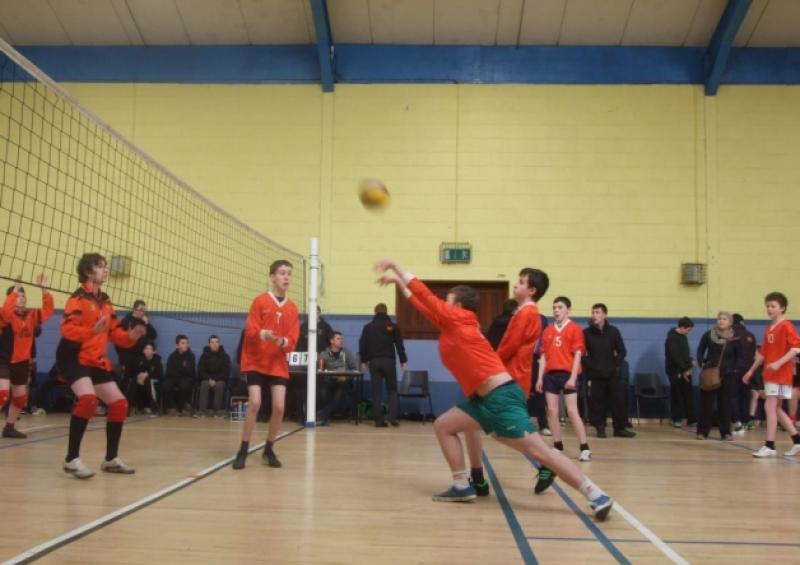 The early signs looked ominous for Drumshanbo as Elphin A’s crushed their B team while Drumshanbo A’s struggled against the Elphin B’s but ultimately it was Drumshanbo’s day.

The early signs looked ominous for Drumshanbo as Elphin A’s crushed their B team while Drumshanbo A’s struggled against the Elphin B’s but ultimately it was Drumshanbo’s day.

However, an unstoppable run by Sam Tighe-Flynn led Drumshanbo B to victory over Elphin B and Drumshanbo A edged out Elphin A in the big match.

Cormac Griffin for Drumshanbo A was one the finds of the day as his consistent serve broke the deadlock in their first match versus Elphin B.

Brian Cotter also starred as he unfroze his startled teammates in the second set against Elphin B.

Elphin had three set points in this set, one saved by a good placing from Christian Wynne. Luke Tuite’s power finally broke the deadlock although later his patient tipping of the ball in the final set against Elphin A was just as impressive.

Drumshanbo B’s first set versus Elphin A saw captain Nathan Malone ace before good digging from Ben Saul and Cormac Lynch set up Evan Gunning to hit a winner. This was all after trailing 3-22.

Runs of serves from David Gallagher and quick reactions from James Tighe made the second set closer.

Against Elphin B, besides Flynn’s run, Darren McTigue received the ball well and passed better and better through the set.

An ace from Roland Semjanovskis sealed the first set for Drumshanbo B.

The battle of the As saw Elphin lead to 11. Then Cian Beirne, who served 25 in a row on the day, helped open up a four point lead.

Beirne’s powerful spikes during the match surprised everyone. An Alan Doran ace inspired an early lead in the second set.

A Brian McCormack winner was part of a Drumshanbo comeback from 9-14 to 16-14 but Elphin took over towards the end.

The final ,deciding, set of the tournament, started very tight with an on-the -run dig and an ace from Raymond Gallagher keeping Drumshanbo in touch. Gallagher’s spike also peppered the action throughout the day. Then Fergal Gilmartin, with a series of aces opened up a lead of 11-4 for Drumshanbo.

But the resting of Griffin encouraged a huge comeback from Elphin and, helped by errors from Drumshanbo, they levelled at 18-18.

Back though came the ever lethal combination of Kian Gibbons and Thomas McManus. Gibbons set up McManus for three unstoppable hits. Drumshanbo regained the lead and never lost it.

Christian Wynne sealed Drumshanbo’s win against their own Bs but the big winner on the day was the steady combining between all the players. Elphin can also be pleased with their great defence.