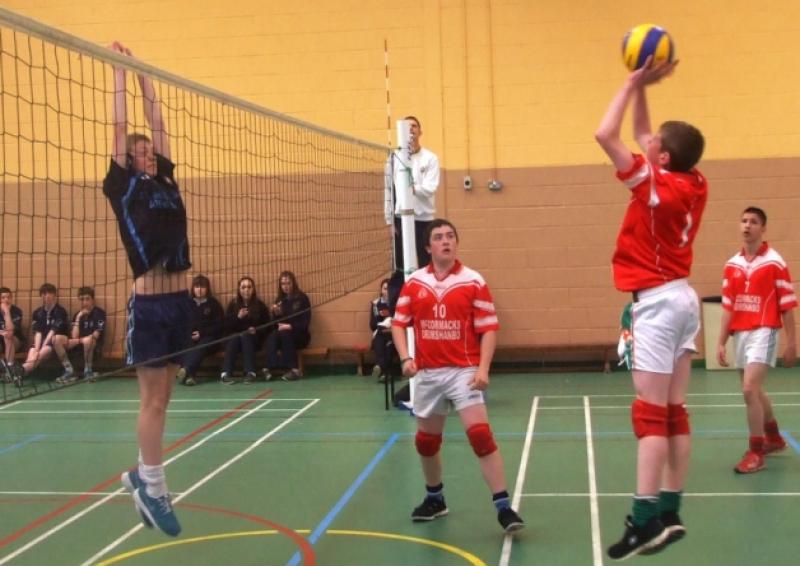 Drumshanbo Vocational School went into their A and B semi finals as outsiders but in both games they worried their opponents, particularly in the As.

Drumshanbo Vocational School went into their A and B semi finals as outsiders but in both games they worried their opponents, particularly in the As.

As the score suggests Mallow were clear winners. The signs were bad when Mallow easily handled a powerful serve from Peter Winters early on as Drumshanbo could not handle the Mallow serves. Just when all seemed lost at 5-17 Drumshanbo staged a mini revival, thanks to good combinations between Winters and Cathal McGourty and a commanding spike from Deividas Dadurka, but the lead was too big.

In the second set, Drumshanbo played much better. From 1-4 they made an impressive comeback with aces from McGourty and a block from Aiden McCormack.

Mallow were immediately alarmed and called a time-out at 4-5. They crawled back through aces to lead 10-7 but again Drumshanbo rallied with great defending from Turlough Moore and Colin Moran.

But then the game entered a slow death from 12-13 as Drumshanbo handled the serve but just lost rally after rally. Not until Mallow were 22 did Drumshanbo score again as Morgan O’Reilly and Seamus O’Grady came on. Just before the end, Sean Grier hit a perfect serve and Byron Tully hit a great spike but the day was lost.

This was enthralling match between two, for the most part, evenly matched teams. The game ebbed and flowed for over one hour. Drumshanbo could be well proud of their efforts as they were outsiders.

As with all three sets, the first set had drama. Down 1-5 Drumshanbo slightly outplayed their opponents until finally at 19-19 they levelled. Gavin Gilmartin’s serve shone first in the comeback to 4-5. David Gallagher starred in the next comeback from 4-9 to 7-9 as he set up Rinalos Semjanovskis for wonderful spikes for that period.

At 8-10 there was a huge rally of attacking volleyball together diving saves from Diarmuid McKiernan who spiked the winner. Fergal Moran peaked in the climb to 19 with saves and serves. Then suddenly Drumshanbo made errors, one when they were peppering Loughrea with spikes. This point marked a watershed as Loughrea aced the three final points.

Drumshanbo recovered from 0-2 in the second set to go into a golden service run from Gilmartin to lead 7-4. Again trailing 8-11, accurate passing from find of the campaign Adam Saul set up McKiernan who levelled the score at 12-12 with an ace. Then, as Loughrea surged ahead again at 15-12, Chris Boyle came on.

It was a great stroke, as his serves and defence tightened the ship. Gary Beirne led the big charge to the front, with a tip down winner, great sets and three serves, the last an ace, leaving Drumshanbo leading 18-16. Loughrea fought back aggressively but they found McKiernan in top form as he saved the ball from the floor on a number of occasions. Finally Gilmartin had his say with a surprise dump and a blistering spike to win the set.

The Gallagher/ Semjanovskis axis pushed Drumshanbo ahead 5-4 in the third with combinations and serving from both. Drumshanbo peaked at 8-5 ahead with a McKiernan block at 10-7. Drumshanbo were caught at 10-10 and the tide turned. Drumshanbo could not direct the ball and dripped scores to 13-23.

Coach Callum O’Hagan Moore must be regretting that he held off the substituting on of Roland Semjanovskis as he was error free in making the score more respectable.

St. Brigid’s thrashed their opponents in the final later that day, making Drumshanbo the second best school in Junior A volleyball for the third year running and this the closest of the 3 teams to winning outright. They again did Leitrim proud.