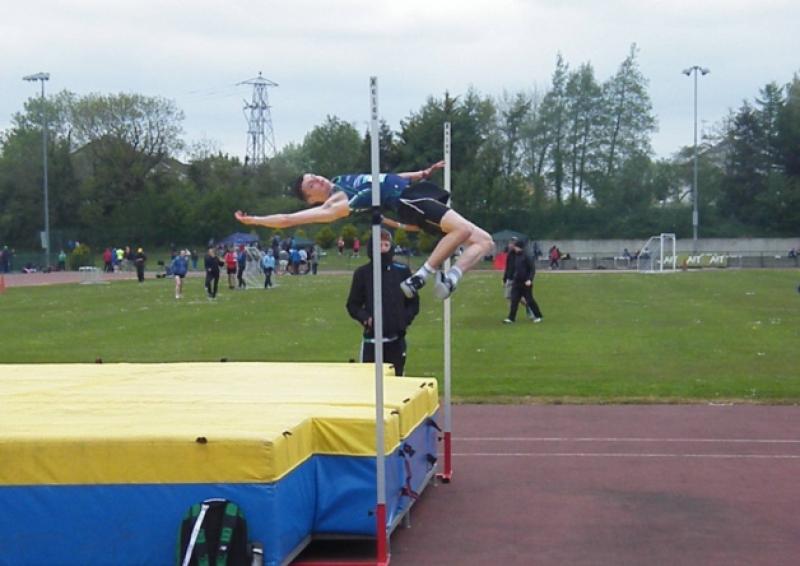 Stephen McDermott and Brian Finn were the top performers at the GloHealth Connacht Schools Track & Field in Athlone last Thursday as both fought out a great battle in the High Jump.

Stephen McDermott and Brian Finn were the top performers at the GloHealth Connacht Schools Track & Field in Athlone last Thursday as both fought out a great battle in the High Jump.

The Carrick Community School duo went head to head in the Intermediate event and were locked side by side as both cleared personal bests of 1.80m.

Stephen’s record of first time clearances saw him pip Brian on count-back to take the title in a great display of jumping. It was a doubly successful day for the McDermott family as Stephen’s sister Orlaith took bronze in the Junior event.

The only double medalist of the day was Carrick CS’s Caitlin Surlis who won bronze with a new pb in the Minor Girls Javelin and then moved up an age group to take silver in the Junior Javelin.

Leitrim athletes also performed well in the sprint events with Elise Bruen (Carrick CS) finishing a very good second in the Inter 300m. With Mohill CC’s Dearbhaile Beirne also in the race, Elise lead from the gun and was only passed by the eventual winner in the last 50 metres.

Dearbhaile Beirne took fourth in the race after earlier finishing second in the steeplechase.

Ballinamore CS’s Kyle McNabola just missed out on the All-Ireland as he finished third in the Inter 400m after earlier taking fourth over 200m. His schoolmate Ciara Goldrick also made it to the All-Irelands as she finished second in the Junior Girls Shot

Carrick CS’s Dara Morahan (80m Hurdles) and Tom McCabe (400m Hurdles) both had thirds in the Inter races after both performed well in their respective 100m and 400m finals.

Carrick’s David O’Connell finished fifth in the Minor 800m while Callum Whelan was desperately unlucky not to medal in the Senior Javelin as he finished 5th.

The hard luck story of the day belonged to Ballinamore’s Sibeal Reynolds who fouled three times in the Long Jump and saw the title taken with a jump 20 cms less than she registered in the Regionals.

Gerard O’Donnell opened his outdoor season with a new personal best of 14.10 seconds over 110m Hurdles at the Loughborough International Athletics meeting in England.

The time moved the Carrick-on-Shannon Athletic Club hurdler up two places on the Irish All-Time list to sixth place as he took 0.22 from his previous best set last August.

In his first race of the season, Gerard reported that he didn’t get into the first hurdle right but finished strongly. The time follows on a breakthrough indoor season that saw Gerard qualify for the European Indoors in Prague last March.

Finishing third in the same race was North Down AC’s Ben Reynolds in a time of 13.91 seconds. Reynolds is ranked second in the all-time lists with a blistering 13.49 seconds and the battle between the two top hurdlers promises to be an intriguing one in the weeks ahead.

Also at the weekend, Carrick AC’s Eanna Madden did not run in the AAI Games in Santry on Sunday as he pulled out of the 100m and 200m events as a precaution after a hamstring strain.