Stroll at the Track gathers momentum

Recording of the “The Living Years” released 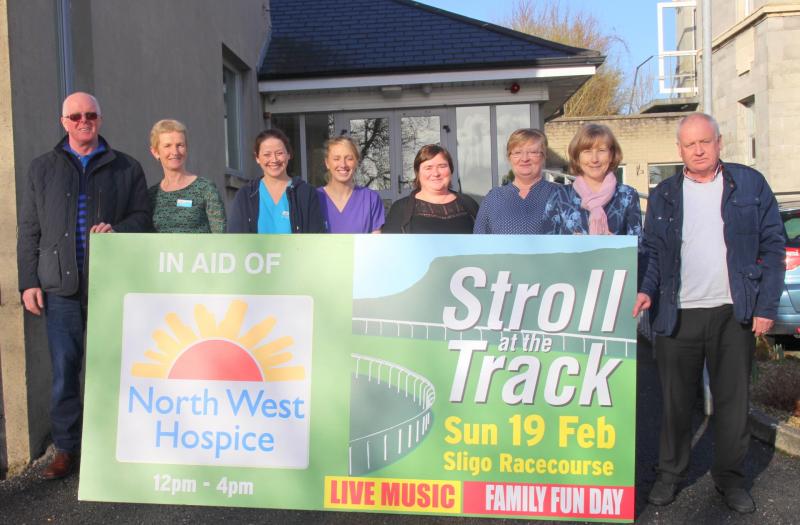 This week Stroll at the Track, a major North-West Hospice fundraiser has gathered momentum.

Details of the event have now been revealed with it scheduled to start at 12pm.

Speaking to Thomas Walsh, from the event marketing team, he stated “this is going to a action packed afternoon with something for everyone. At some stage North West Hospice will have touched the lives of most families and this event will add to the Hospice's much needed fund.

➢ A Stroll around the Track will take place at 1pm (meeting point outside of event marquee).
➢ The North-West’s largest “Balloon Let Off” will take place from the centre of the track at 3pm where memorial balloons will be let off. The balloons can only be purchased from the track on the day. This event will be led by formerly of Westlife Markus Feehily who is also patron of the event.
➢ Dozens of artists from the North West will be providing entertainment such as Kelesa Mulcahy, Sandy Kelly, Glen Cal and Georgie Gorman.
➢ Kids activities are plentiful with The Scruffy Duffy Show, Farmyard in the School Yard, Beat the Bounce Kids Zone, Benny the Bull, Sligo Fire Engine Demonstration and an opportunity to take photos with replica FA, Premier League and Champions League cups.
➢ A bike spinning Marathon will be ongoing through the event with most sports being represented at different intervals.
➢ Refreshments will be available on the day and the majority of the event will be weather proof.
To add to the event “The Living Years, Mike and the Mechanics” has been recorded by Georgie Gorman and Kelesa Mulcahy with support on keys from Darragh Houston. The song has been launched and is available to download on itunes. All proceeds are in aid of North West Hospice.

Speaking at the launch of the recording Georgie said “i was delighted to get this opportunity to record this song in McCunes Recording Studios, Balbriggan with Kelesa and Darragh. Hospice has a close place in my heart and hopefully everyone will download it and it will add to this fundraising drive”.

Stroll at the Track will take place at Sligo Racecourse on Sunday, 19th February from 12-4pm. The event will consist of many activities.

Entry for pedestrians will be via main gate and parking will be open via centre of Sligo Racecourse.

Anyone wishing to donate or help out in any way are asked to contact strollatthetrack@ gmail.com. For more information contact Thomas Walsh 0861025285.