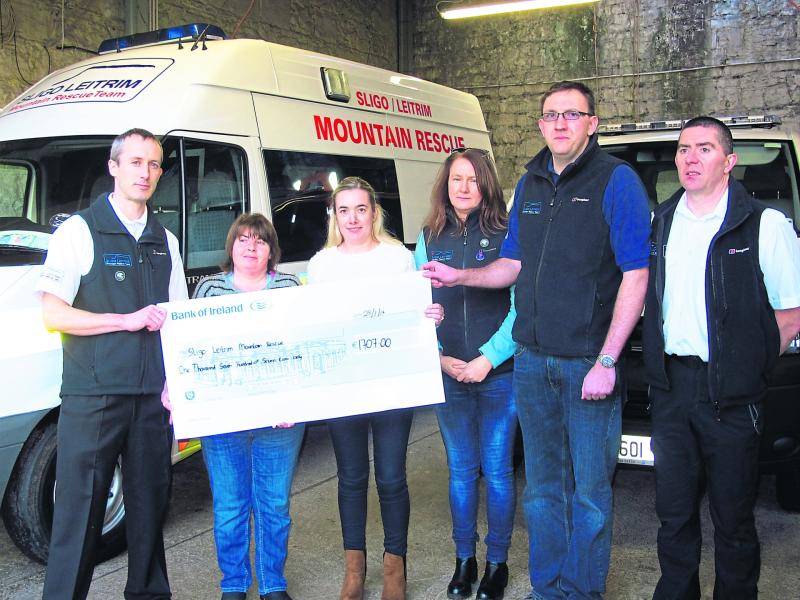 Following the tragic death of Paddy McCaffrey, of Rossinver, in a landslide on Kilronan Mountain on 12th December last, the family and friends of Mr McCaffrey have come together to express their appreciation to the Sligo Leitrim Mountain Rescue Team for their role in the search and recovery operation.

Team spokesperson, Fiona Gallagher, described the donation received as “the most substantial sum we have received from individual donors, in at least the last 15 years.”

“Paddy McCaffrey lost his life in tragic circumstances during a landslide on a windfarm site on Kilronan Mountain above Ballyfarnon”, stated Ms Gallagher.

“Sligo Leitrim Mountain Rescue were tasked by the Gardaí in assisting with a search and rescue operation at the site in Derrysallagh alongside the Fire Service, paramedics and site workers.

“This was a difficult and challenging operation that entailed a significant degree of co-ordination and co-operation between everybody involved, and was carried out in poor weather and visibility.

“As a rescue team our desire is always to preserve life; sadly that was not possible on this occasion, however it was of huge importance for the family to recover the remains of the deceased in a dignified and respectful manner.

“We are extremely grateful and humbled by the huge gesture of acknowledgement by Paddy’s wife Helen, the extended family, co-workers, friends and local community in establishing a memorial fund and subsequently collecting over €1,700 for mountain rescue.

“We are a voluntary service and this donation is probably the single largest bequest we have ever received. It is a true testament to the family that they have thought of others in the midst of their own grief.

“This donation will be utilised to purchase a single piece of rescue equipment such as a stretcher, which will be used in Paddy McCaffrey’s memory, to save lives on the hills of Sligo and Leitrim, thus ensuring that something positive will come from this tragic loss.

“We would like to express our deepest appreciation to all who contributed to this fund and to thank the family for taking the time to meet with us and thank us personally. It makes our work all the more worthwhile.”