Call for Leader of the House to intervene 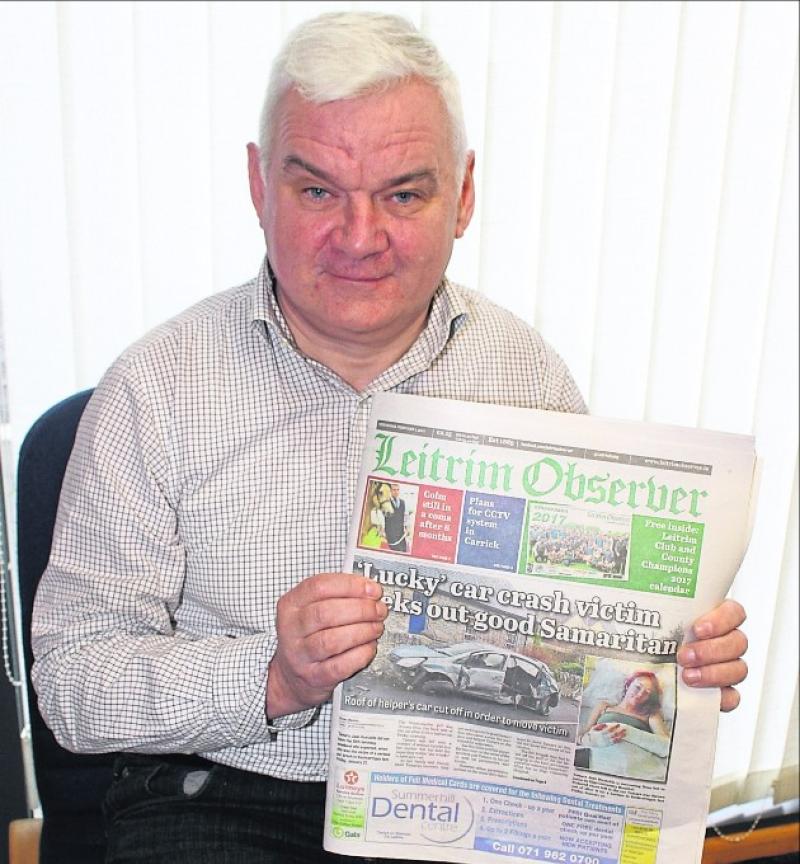 The case of the Good Samaritan, Paul Egan, also known as 'The Unluckiest Man in Ireland' has made local and national headlines.

Paul came to the assistance of a young lady who was involved in a road traffic accident.  He placed her in his car until the emergency services arrived.  And they duly cut the roof and doors off his car to take her to hospital.

This left Paul seriously out of pocket as he had to rent a car at his own cost as his insurance company prevaricates.  A fundraising page for Paul was set up by Leon Quinn of ReverbStudios in Carrick-on-Shannon and at the time of going to press last week had raised €7,300.

The matter has now been raised in Seanad Eireann by Fianna Fail Senator Keith Swanick.  The following is a transcript of what was said:

"I wish to raise the incredible story of a concerned citizen, Paul Egan, who should be called a Good Samaritan. It started almost three weeks ago on 27 January in Keshkerrigan, County Leitrim, when Paul Egan, a HSE employee from Sligo encountered a very serious car crash. He witnessed an 18-year old woman, Tamara Jade Huxtable, from Drumshanbo, County Leitrim, wandering in the middle of the road after her friend's car crashed into a wall.

"As it was pouring with rain, he helped Tamara into the passenger seat of his car for shelter. They were soon joined by gardaí, and members of the fire brigade and ambulance service. During that time, Tamara began to lapse in and out of consciousness. Following very clear protocols, it was decided for fear of spinal injuries that Tamara would be cut out of the vehicle. This vehicle was not involved in the accident, but was the vehicle of Paul Egan, the Good Samaritan. In summary, his 2008 Opel Astra car was destroyed in the operation, including having its roof removed. She was then removed from the vehicle and airlifted away by helicopter.

"The kindness of strangers such as Paul on that night helps prevent more serious injury. However, Paul Egan now has no car. A crowd-funding page has been set up by others to help him. He has had to hire a car to allow him to continue to work.

"Now the insurance company is passing the buck. It is an absolute scandal that a man who came to the assistance of somebody in serious danger that night in Leitrim is being given the run-around by the insurance company. It has even advised him that when he goes to renew his policy, it will treat it as if he had a claim from the accident, which is unbelievable.

"I ask the Leader to intervene in this case with the Minister for Finance, and the Minister for Jobs, Enterprise and Innovation. Generous members of the public have raised money to get him back on the road and back to work. The insurance companies need to be brought to task over this.

"Despite all this, Paul Egan has said he would do the same thing again if he encountered the same scenario. He said, "I have teenage daughters myself and I’d be hoping someone would look after them if they had a problem."