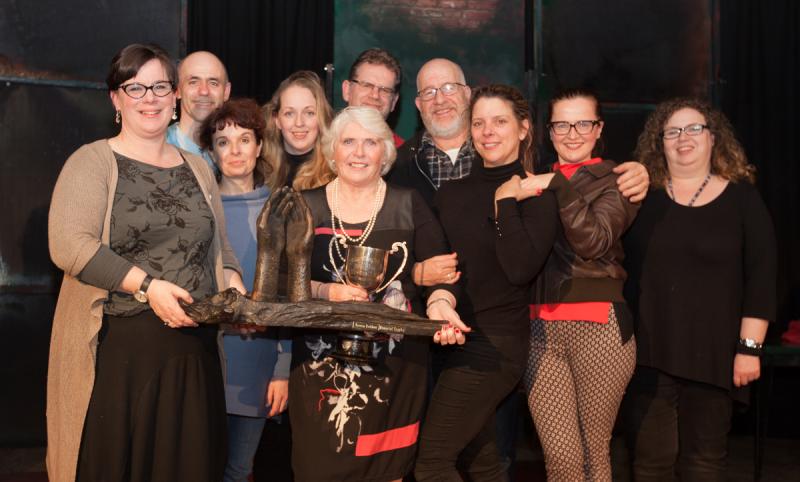 Newtownstewart Drama Group won the Confined Section with their production of  “The Hen Night Epiphany ” by Jimmy Murphy.

The Adjudicator, Ciaran McCauley  said that the overall quality of the performances during the week were of a very high standard.   He congratulated all the groups that took part for their dedication and commitment to amateur drama.  He was very impressed with the large crowds and the attentiveness of the audience over the eight nights.

He paid tribute to the Drama Committee for the diversity and variety of the plays they had chosen.  He thanked them and all the people he had met over the week for their kindness and courtesy to him.

On behalf of the Drama Committee, Frank Fox thanked the Adjudicator for sharing his extensive knowledge of the plays, not just with the groups, but also with the audiences at the end of each show.

He thanked the ladies and gentlemen who turned out over the eight nights to cater for the groups, man the doors, sell tickets and all who worked behind the scene to keep the festival running smoothly. He also thanked the very generous sponsors who year after year give so generously and graciously to the festival.

He  welcomed the contribution from Killasnett Co-operative Society who were the main sponsors for this year’s Festival   He thanked the audiences, many of them who have been coming to the festival since it started, for their loyalty as without them the Festival would not be feasible.

Lastly, he thanked the eight groups, it was their hard work and dedication that had made the festival such a great success. The Festival was officially closed by Ronan Haslette, Merenda Ltd.

Most Promising Actor:  Charlie McGuinness, Corn Mill Theatre for his portrayal of Gar Private in