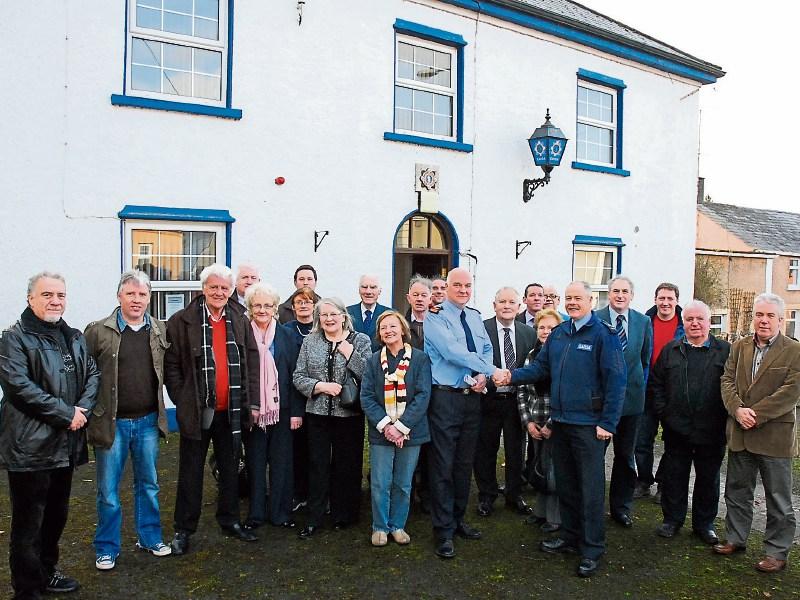 Community volunteers in Dromahair fear a golden opportunity has been missed to secure funding that would transform the old Garda Barracks into a multi-purpose community civic centre.

Four years after a commitment was given by then Minister of State with special responsibility for the Office of Public Works, Brian Hayes, that the building would be handed back to the community, the committee of volunteers from various organisations fear their dream of a multi-purpose community building will not come to fruition.

The committee thought they had made a breakthrough recently when they found a favourable response to their application for Peace IV funding but were to face further disappointment as they would only be eligible for the funding if they secured a 25 year lease.

Peter Kearns, Chairperson of the Dromahair Shared Space Project, gave his view on the barracks as it currently stands and was critical of the OPW for failing to be more flexible in terms of offering a lease rather than a licence.

“It appears to be a case of a State apparatus not having the skills to deal with community groups. We built our skills up over four years and had a plan.”

The committee were recently contacted saying Peace IV funding is no longer available for the project meaning the plans to utilise the building for the benefit of the entire community are now in limbo.

Johnny Gogan expressed his frustration in relation to the delay in the building being handed over to the community and acknowledged it will be difficult to see the project come to fruition.

“We think it’s gone. Peace IV needed to know from us by mid-March.”

Fellow committee member Theresa Butler expressed a similar sentiment when she stated, “We are still hoping for a miracle that somebody will say 'this is a good project, let’s change the criteria'.”

Four years of meetings and frustration

January 2013 - Dromahair Garda station along with 94 other stations throughout the country closed.
July 2013 - Minister of State with special responsibility for the Office of Public Works Brian Hayes visited Dromahair where it was announced the building would be handed over to the community.
Summer 2013 - Criteria set out by the OPW was outlined at a public meeting including that the application for a licence for the use of the building would only be granted to a limited company with a proven track record
August 2013 - The committee were told the building would be for everyone but two weeks later received a letter from the OPW saying Minister Hayes wished to clarify that the top half of the building was to be allocated to the boxing club.
Spring 2014 - It was agreed the boxing club should ultimately have a separate structure to the side of the Garda Barracks and the group would work together. Dromahair Area Recreation Centre (DARC) were asked to come on board as they were a company with a track record.
Engineer structural reports, architect drawings and investigating the possibility of planning permission were funded by the local community.

October 2015 - Received contracts from OPW but a month later had to go back to the OPW as DARC refused to sign the contract as they had raised money for the park redevelopment and were worried signing the contract could have the potential to eat into funds already raised. Another not for profit local company, with the required track record, was identified.
December 2015 - The committee re-applied to the OPW for a licence to operate the building as a community facility. The OPW failed to reply to the application.
June 2016 - The Department of Justice undertook a review of the Garda Stations that had been closed but had not been handed over.
December 2016 - Peter Kearns attended a consultation meeting in relation to Peace IV funding. Leitrim County Council were said to be very supportive in terms of wishing to help secure funding for Dromahair.
January 2017 - Johnny Gogan contacted the Chief Superintendent in Sligo requesting clarification from the Assistant Commissioner responsible for carrying out the Department of Justice review. Two days later a public announcement was made saying six stations, three urban and three rural would be re-opened. The group felt a bit of pressure could have got Dromahair out of the review loophole.
March 2017 - The group were informed Peace IV funding was no longer available for the project. Representations were made to local politicians who reported the OPW would not change their position.