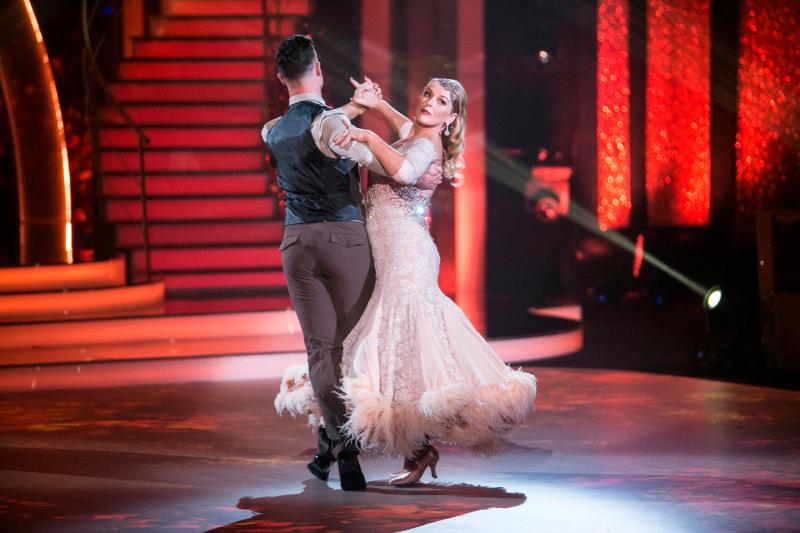 Katherine Lynch and Kai Widdrington waltz on Dancing With The Stars

Mohill's often crass Katherine Lynch was transformed into Cinderella on RTE's Dancing with the Stars at the weekend.
Not only did Katherine's softer side surprise the TV audience at home but her impressive moves pushed her odds to win the Glitterball trophy higher.

Week Two of Dancing with the Stars saw the ladies take to the dance floor and BoyleSports can report a massive move for Mohill comedian Katherine Lynch to win the show.
Available at 25/1 prior to her waltz with professional dancer Kai Widdrington that earned a score of 18 from the three judges, punters were impressed and quickly latched onto the Mohill native’s price seeing it plummet into 7/1.
Current favourite, Dayl Cronin, has seen his price ease slightly to 7/4 from 6/4 whilst Red Rock actress, Denise McCormack, who topped the scores on Sunday night with 22 points for her jive, is now 9/4 from 5/2 to win.

Model Thalia Heffernan and Curtis Pritchard's Quickstep received 16 points and the model has seen her price eased out to 9/1 from 9/2 to win. RTE News reporter Teresa Mannion is now 20/1 to win from 33/1 after her tango whilst Dr. Eva Orsmond has drifted out to 50/1 from 33/1 after she received a grilling from the judges, receiving 13 points for her salsa with Sean Smullen.

Liam Glynn, BoyleSports spokesperson said, “Katherine Lynch has been a major springer in the DWTS betting and is now only priced at 7/1 to win having been available at 25/1 early doors on Sunday. Some punters have got on at 25/1, 20/1, 16/1 and 12/1 seeing the Mohill native now pose as a big liability if she manages to go all the way.”
Katherine's transformation on TV to a graceful Cinderella was a surprise for fans who know her as a crass and full on funny woman.

The judges gave her Waltz three sixes; which many felt a bit harsh.
Slowing things down to the Dusty Springfield’s hit, 'If You go Away', comedian Katherine Lynch and her partner Kai Widdrington danced a classic Waltz.
Judge Brian commented, "Such a transformation, you were Cinderella going to the ball, you should be proud of yourself.
“That was a brave piece…. Technically you did better than ok.”
We are excited to see her next dance piece!