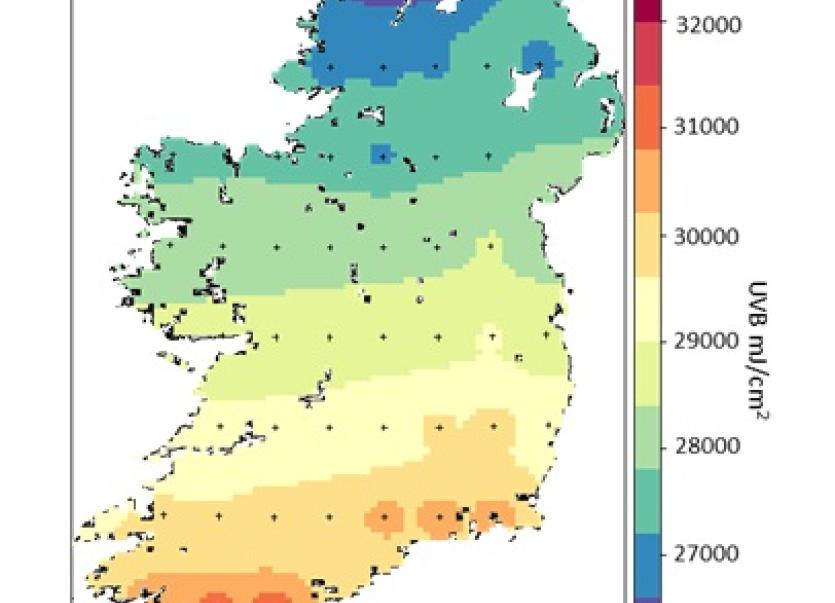 A new study from Trinity College Dublin in collaboration with Ulster University has put paid to the myth that Irish sunshine is too weak to encourage any vitamin D production in the skin during the ‘vitamin D winter’, estimated to last from about October to April.

Using data from European Space Agency (ESA) satellites to measure UVB levels over Ireland, the researchers found that a strong relationship between sunshine and vitamin D persist in the Northern hemisphere, including Ireland, and beyond summertime, contrary to what was previously thought.

The amount of vitamin-D-producing UVB is greatly reduced at higher latitudes, such as Ireland, but this new research shows that sunshine contributes to vitamin D levels throughout the year, even during the ‘vitamin D winter’, even in Ireland. “While UVB levels are much less in the colder part of the year, they are far from zero” said Ms Fiona O’ Sullivan, a PhD student working on this project.

It was also found that within our cohort, who were all aged over 60 years, those who report avoiding the sun had much lower levels of vitamin D and were at risk of deficiency, when compared to those who enjoy sunshine. Interestingly, participants aged between 60-74 years who report enjoying sunshine managed to avoid severe vitamin D deficiency, even if they were not taking supplements.

The research team from Trinity’s School of Medicine made use of the ESA’s satellites which continuously measure parameters relating to solar radiation, weather and ozone layer, factors that strongly affect the UVB dose that reaches the Earth’s surface. This enabled them to accurately account for sunshine levels over a period of time, in the area that each individual in the study lived. This is the first time these satellites have been used in research on vitamin D and UVB exposure or personalised to this extent in a study. UVB has also been largely ignored in previous research, due to the difficulty of measuring it accurately, particularly in large numbers of adults living across a geographical location.

“Data we obtained from our collaborators at The Royal Netherlands Meteorological Institute enabled us to get the most precise estimate of ambient solar UVB dose to date, personalised for each of 5,138 study participants in Ireland. We were able to measure, based on where they lived, the amount of exposure they got to sunshine over the previous five months, and analyse how important their exposure to sunshine was to their levels of vitamin D,” said Dr Lina Zgaga, lead researcher and an Associate Professor of Epidemiology in Trinity College Dublin.

Ms Fiona O’ Sullivan also said: “These findings are especially important as the prevalence of vitamin D deficiency in Ireland is quite high, especially among the elderly, and although it might not seem like we get a lot of sunshine, in actual fact the sunshine we do get is still a very important source of vitamin D.”

Large differences in ambient UVB between the North and South of the country were found –19% higher yearly UVB in Mizen head than Malin head, even though Ireland is a relatively small country. Intriguingly, there were also considerable differences between the East and West of the country, especially in the summer time, giving greater meaning to the popular phrase ‘The Sunny South East’.

The ability to synthesise vitamin D in the skin is known to decrease with age. All participants in the study were older adults (aged 60 and over), but the importance of sun exposure for healthy vitamin D levels was nonetheless clearly demonstrated.

By accounting more accurately for sunshine, the study was also able to examine the role of vitamin D supplements more closely. The study confirmed a dramatic impact of supplementation on maintaining a healthy vitamin D status.

“It is difficult to prescribe sunshine, as too much is a risk for skin cancer, and too little is a risk for vitamin D deficiency” Dr Zgaga said. She added: “It is much easier to follow black-and-white advice, such as do eat vegetables and do not smoke. With sunshine, everyone needs to aim for their personal ‘right amount’, which unfortunately changes all the time!”