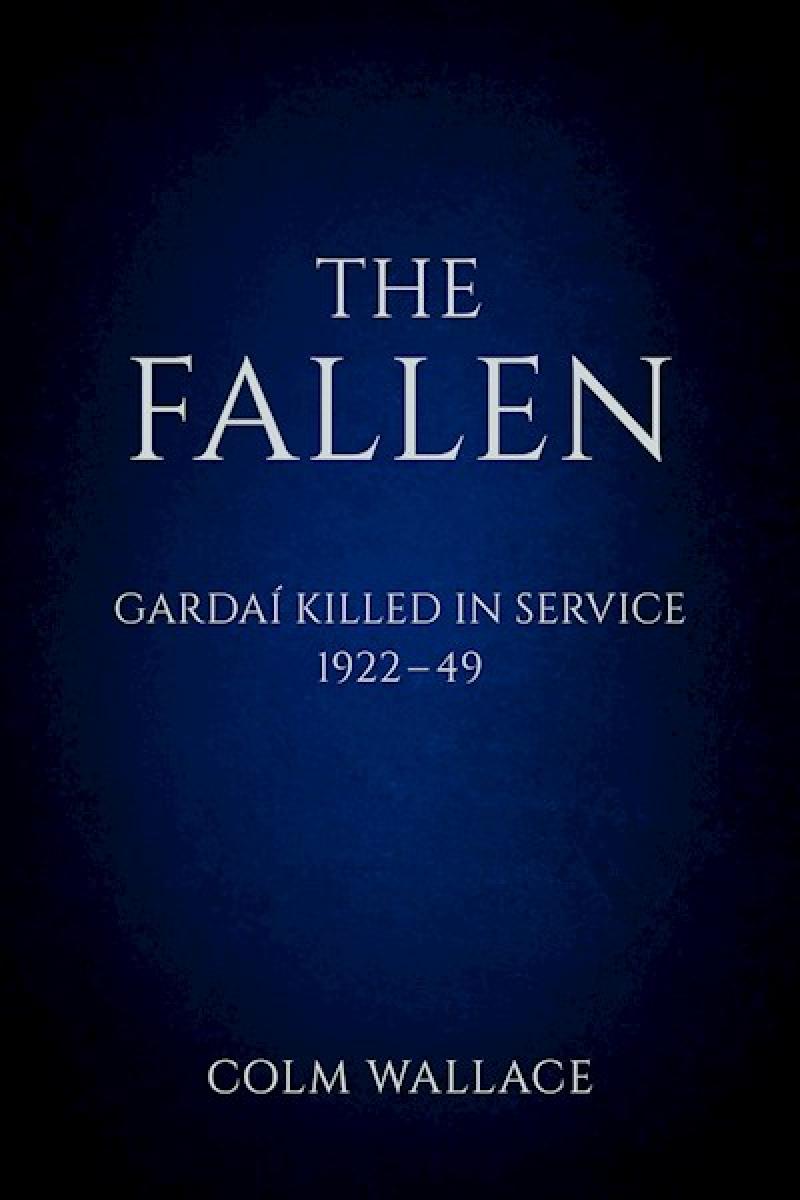 The Fallen by Colm Wallace

A new book by author Colm Wallace has released a new book "The Fallen: Gardaí Killed in Service 1922-1949."

It is published this month by History Press and features an extensive chapter on the story of Patrick Reynolds and Detective Patrick McGeehan who were shot dead at Foxfield, outside Ballinamore, by Joseph Leddy in 1932.

Ballinamore was a troubled place in the late 1920s and early 1930s, with clashes between Gardaí and republicans a regular occurrence. The trouble would culminate in 1932 when a Garda and TD were shot dead just outside the town. There was no paramilitary involvement however, and the circumstances of the death were strange to say the least.

Politician Patrick Reynolds was a native of Ballinamore who owned a public house and a hardware shop in the town, as well a couple of large farms. The 45 year old was married and the father of seven children. Reynolds had also branched out into politics, running as a TD for Sligo-Leitrim in the election of 1927. He was elected as a government candidate. He was described as popular locally, even amongst his opponents, and his re-election in the election of 1932 seemed a certainty.

The engagement ended at 2.30pm and afterwards Reynolds met a garda stationed in Ballinamore, Detective Patrick McGeehan, who had been on business in the town. McGeehan, a Donegal native, asked the TD for a lift to the town. Reynolds agreed readily, although he informed the Garda that he would be stopping to canvass first. A barrister named Mr Barry O’Mahony and a Mr Wrynne also accompanied the men. John McKeogh was the driver of the crowded vehicle.

The car made a detour to Foxfield, where Reynolds called to the home of Joseph Leddy. A married man with two sons aged 10 and 12, Leddy was an ex-RIC office who had resigned during the war of independence. He received a small pension for services rendered to the IRA. Several TDs had helped him to receive the payment. Patrick Reynolds stated that he had interceded on Leddy’s behalf and helped him to obtain what he felt was rightfully his, a claim that Leddy rejected. At about 4:15 p.m. Reynolds left his four compatriots in the car and approached Leddy’s door alone. The Leddys, who were sitting down waiting for the kettle to boil, greeted the TD warmly saying “Welcome, Mr Reynolds.”

Reynolds did not return the greeting, apparently immediately accusing Leddy of double-crossing him saying “You are out canvassing against me.” Leddy refuted this, claiming “I never went out canvassing against you” Reynolds repeated the accusation before attempting to strike Leddy. A furious Leddy then stood up and said “Don’t come into my house to beat me or I will shoot you.” Reynolds retorted “I dare you to shoot me,” and grabbed Leddy by the scruff of the neck shouting “I’ll kill you, you bastard.” Wrynne and McGeehan heard the commotion and got out quickly. They entered the house, where they were met by the sight of Reynolds and Leddy tussling and fighting. Eventually McGeehan and Wrynne managed to pull the men apart. As Reynolds was being pulled out the door he threatened Leddy “You bastard. I took a wrong oath to get you the pension and by God, I will see you broke off it.” Leddy then rushed to the corner where he picked up a shotgun and threatened to shoot everyone in the house. Reynolds sneered “There are more guns than yours.”

The car had been turned and was nearly at the door when the men got outside. McGeehan stood at the front while Reynolds was standing at the back, reluctant to enter the car and leave the scene. Suddenly, Leddy appeared at the door with the shotgun and repeated “the first man that comes inside the door I will give him what is in the gun.” McGeehan shouted “I’ll fire, Leddy, if you fire.” Reynolds then said to Officer McGeehan “Give me that gun, by God I will plug him in his own door”. He had hardly the words out of his mouth when Leddy aimed the gun at the Garda and fired at him. It struck him square into his chest. The Garda somehow managed to stumble over fifty feet down the road to the mouth of the laneway where he crashed face first into a pile of rocks, leaving a trail of blood along the ground behind him.

Reynolds watched in horror. He then turned towards the house owner, shouting “You need not think you will frighten me with your gun. I was never frightened. I faced better than ever you were.” Despite his nephew’s best attempts to pull his arm back, Leddy managed to raise and fire his shotgun, shouting “Reynolds, take that.” The bullet struck Reynolds in the back and the TD fell where he stood. Leddy then calmly walked four or five steps to where McGeehan lay and picked up the Garda’s revolver. The other men from the car fled, while Leddy handed the empty gun to his nephew saying “We will soon be called for.”

Fr O’Connor from the nearby village of Fenagh was the first on the scene at some point after 4:30 p.m., finding Reynolds dying and McGeehan dead. The doctor was also quick to the scene, confirming that both McGeehan and Reynolds were now deceased. He was swiftly followed by several Gardaí from Ballinamore who had heard two men were dead. They did not know the circumstances of the shooting or that one of their colleagues was amongst the dead men. The Gardaí found Leddy calmly smoking a pipe, although they did not know he was the wanted man. Detective Kenny asked “In the name of God, what happened here?” Leddy responded calmly “I suppose you know what happened. The men are dead and we cannot bring them to life.” Leddy was quickly placed under arrest.

The two men were buried within days, both funerals attracting large congregations. The election in the Sligo-Leitrim constituency was also put back by two weeks. The trial would concern itself only with the murder of Patrick Reynolds and began on 7 March 1932 in the Central Criminal Court on Green Street in Dublin in front of Mr Justice Meredith. Leddy pleaded not guilty to the charge of wilful murder.

The prosecution called as witnesses all the men who had been in the car with McGeehan and Reynolds, all of them downplaying the threats that Reynolds was alleged to have made. Joseph Leddy also chose to take the stand. He deposed that on the morning of the incident he had been out hunting with his nephew and on his return he had left the gun in the corner of the kitchen and eaten his dinner. A knock on the door came some minutes later and Reynolds came in. The couple welcomed him – Reynolds shook Mrs Leddy’s hand but clenched his fist when Joseph Leddy extended his hand to him. The TD then called the house-owner a cur and again accused him of canvassing for his rival, Carter. Leddy denied canvassing and assured Reynolds he would get his number one. Reynolds then said “I will kill you in your own house,” before grabbing him by the throat and punching him. After McGeehan and Wrynne managed to remove Reynolds from the house, McGeehan had taken his gun out of his pocket and said “Keep quiet you, Leddy.” Leddy followed them to the door and said “Go home Paddy, that is the bad way for getting votes.”

Leddy described how he then noticed McGeehan’s revolver and grabbed his own shotgun, threatening to shoot whoever came near his door. Leddy claimed that at this point Reynolds had asked the detective for his gun to shoot Leddy. Leddy stated that he was in fear of his life. He asserted that it was Reynolds he had shot first, aiming for his leg. He had then shot McGeehan. “I had no intention of killing either of them, I thought I was going to be shot myself.” Leddy went on to say that he was sorry but that he had been trying to protect his wife and children. “I had no resentment against Reynolds but I saw myself in danger”. The prosecution disagreed wholeheartedly with the defence’s version of events, insisting that this was a straight-forward murder case and reminding the court that Reynolds was an unarmed man who was shot down. The judge gave the jury options of murder or manslaughter, if the provocation had been such as to render Leddy in fear of his life. The jury retired and were absent for an hour and forty minutes. When they returned, Leddy was found not guilty of murder but guilty of manslaughter. The jury also gave a strong recommendation to mercy on account of the provocation before the incident. The foreman urged the judge to give “the lightest sentence possible.”  Joseph Leddy, who agreed at that point to plead guilty to the wilful manslaughter of Detective Officer McGeehan, was thus sentenced to two sentences of twelve months in Mountjoy prison, to run concurrently.

Mrs Mary Reynolds was selected to run for TD in place of her late husband and she was elected with over 5,000 first preference votes. It would not be enough for Cumann na nGaedheal, who lost out to their bitter rivals Fianna Fáil for the first time in the Free State. In March 1933, newly elected Mrs Reynolds sued Joseph Leddy for the death of he husband. She was awarded £1,050.

Colm Wallace has written a book “The Fallen: Gardaí Killed in Service 1922-1949” about twenty-one Gardaí killed in the line of duty in the lifetime of the Irish Free State. It is available in all good book shops and is also available on amazon.com