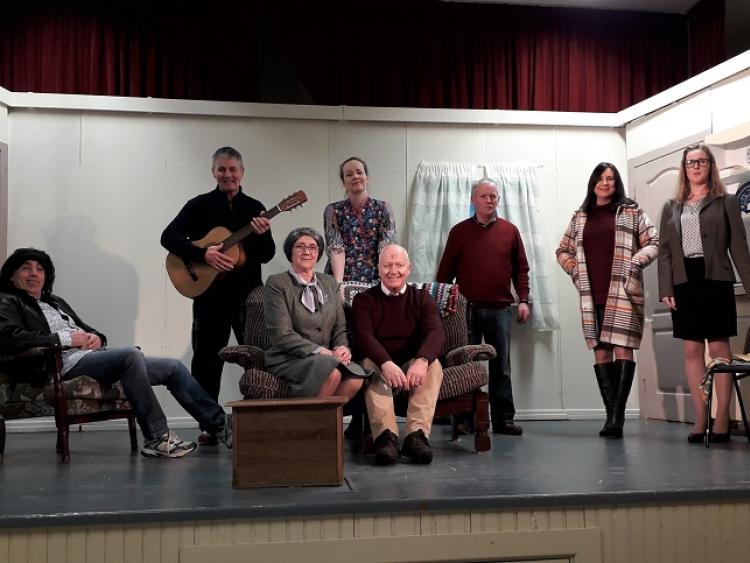 So there will be mayhem on stage in Fenagh Community Centre on Friday, and Saturday, March 2 and 3 at 8:30pm when the newly formed Fenagh Drama Troupe perform the hilariously funny 3 Act Comedy play, “The Maiden Aunt “ by Jimmy Keary.
Years ago, Maiden Aunts (Spinsters) were known to come in two categories; the generous one, who lavished love and showered gifts on nieces and nephews.
Then there was the other category, the resentful maiden aunt, who resented everything in a life that passed her by. Mary Murphy’s (Sinead Conefrey) Maiden Aunt, Gertie (Doreen Honeyman) is of the latter category. Aunt Gertie is even more intolerable, because as a retired school teacher, she “knows everything“.
So when Mary Murphy learns that Aunt Gertie is getting out of hospital to stay with her, she rightly fears a calamity is about to fall on the household.
To make things worse Gertie despises Mary’s husband Dan (Peter Kilkenny). Dan’s feelings for Gertie are mutual. It doesn’t help, also, that Mary’s music mad, irresponsible brother, John Paul (TP McLoughlin) is living with them and is frequently joined by his music side kick, equally mad Jarlath (Frank Smith). Then there is their farm worker, Francie Gilhooley (Seamus Mollaghan), “poison“ to Aunt Gertie .
There won’t be much welcome, also, for Mary’s friend Caroline (Nicola Kearns) and Paula (Claire Sharpley), when they arrive in the Murphy household.
The cast is full of talent. They and this really, really funny play, will have audiences rolling with laughter from the curtain rises until it falls.
When Fenagh Drama Group go on stage on Friday, March 2 and Saturday, March 3 memories  of the wonderful Fenagh Drama Troupe productions of the 1940s , 50s and 60s will be rekindled. Many older people will recall great plays and actors, who were household names, not only in Fenagh , but also in the surrounding parishes , where Fenagh took their plays, annually in Lent.
It is appropriate, also, that the play is directed by Fenagh native, Andy Redican, well known for his acting and directing with Drumkeerin Drama Group .
Last year Andy directed the newly formed Kiltubrid Drama Group’s phenomenally successful “Widows’ Paradise” in Drumcong.
Andy recalls many of the old Fenagh plays and actors, their stage exploits providing much fireside discussion in the run up to productions and after.
A show not to be missed.