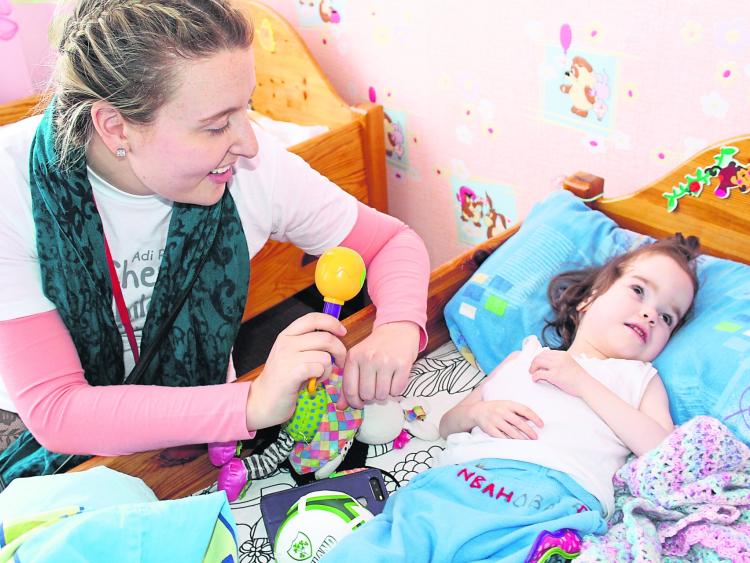 Leitrim Rose, Erin Moran is pictured with one of the children in the orphanage in Vesnova, Belarus.

2017 Leitrim Rose of Tralee, Erin Moran from Ballinamore has just returned from an emotional volunteering trip to an Orphanage in Belarus with Adi Roche's Chernobyl Children International.
Erin accompanied the 2017 Rose of Tralee Jenny Byrne and 26 fellow roses for a week of caring for the children in Vesnova Children's Mental Asylum, where victims that are still being born with dreadful deformities and illnesses are sent to by the country's authorities.
Braving the snow and freezing conditions, Erin followed in the footsteps of previous Leitrim Roses who travelled over to Belarus on the same mission, to bring smiles and laughter to the kids who don't receive any one to one care or attention during the day.
While there, the roses were also shown some of the projects that Adi Roche is responsible for such as “Homes of Hope” where healthier children are fostered to a loving family instead of being admitted to orphanages or other institutions.
Brendan Galvin of the Leitrim Rose Centre who coordinates the trip said that “people don't realise that the Chernobyl tragedy is still effecting thousands of people and to see the Roses bringing love and compassion to the children with the saddest of existences is absolutely heart warming.”