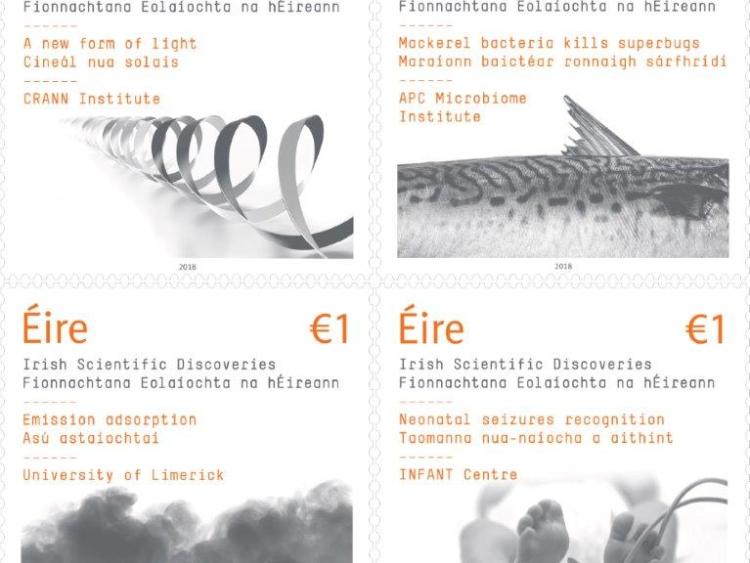 An Post today has unveiled four €1 stamps titled Irish Scientific Discoveries at the international Schrodinger at 75 Conference organised by Trinity College Dublin and hosted by the National Concert Hall.

The series of stamps highlight recent scientific discoveries made by scientists who work in pioneering research and development in Ireland.

The science-based stamps represent new areas of research, which are generating new knowledge, cutting-edge technology and competitive enterprise.  The four topics; new forms of light, fighting superbugs, emissions adsorption and predicting neonatal seizures are examples of innovative and impactful academic research being carried out in academic institutions around the country.

Science Foundation Ireland (SFI) – an agency of the Department of Business, Enterprise and Innovation – is the national foundation for investment in scientific and engineering research and contributes to societal and economic awareness of the value of science, technology, engineering and maths to our economy and society. SFI were involved in the selection of scientific breakthroughs which feature on the stamps.

The scientific discoveries featured on the stamps are a credit to the institutions from which this new and exciting work is coming, they recognise the teams and individuals who are applying their minds and their experience to new discoveries and they show the importance of scientific investment and research in shaping the future.

The stamps are designed by Dublin based design agency, Detail, and are available in the GPO, Dublin, at selected post offices nationwide or online at www.irishstamps.ie