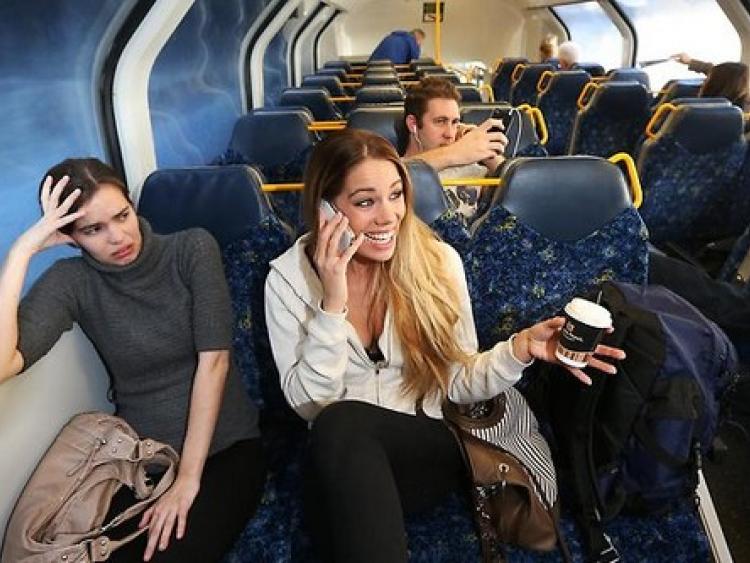 People having loud and endless phone conversations in public places is one of our top tech turn-offs.

Online ads that follow you around and people holding loud and long phone conversations in public places are the worst irritants of our modern digital age, according to a new international poll.

They topped a list of such digital aggravations, in an online survey of 5,029, conducted by pollsters YouGov on behalf of Living MacTavish, a business that connects people in the offline world by hosting salon-style gatherings of thought-leaders in San Francisco, New York and London.

People playing music or videos at full volume in public on their phones and “Phone Zombie” pedestrians bumping into you or each other on the sidewalk/pavement ranked third and fourth respectively.

Endless online requests for feedback or ratings and having to compete for attention with people’s phones during at mealtimes ranked joint fifth.

“We’re tiring of the constant distraction and intrusion of technology in our relationships and daily lives. Offline is the new online.”

Poll respondents were shown a list of 12 behaviours or experiences common to our modern digital age and asked to pick the ones that they personally found annoying.

The two experiences that polled joint top, on the basis of each irking nearly two-thirds (63%) of respondents, were:

• Online ads for something you once clicked on, that then keep following you around

• People having loud and endless phone conversations in public places.

There is, says MacTavish Best, “a digital paradox” to our time. “The more digital that the world becomes, the more people are realising that all real relationships and business deals happen offline, in an analogue world.

“And it’s folks in their twenties and early thirties, the so-called digital natives, who are leading the charge back to the future and adopting the old analogue/analog ways with most gusto.”

Four other options were found annoying by over half of all poll respondents.

• Endless requests to "rate" or give feedback on companies or services you've contacted. (53%)

The single most irksome thing for those 55+ was “People having loud and endless phone conversations in public places”.

What, by contrast, annoyed the largest percentage of those 18-24, were “Online ads for something you once clicked on, that then keep following you”.

This is also what annoyed the largest percentage of both women and men in general, although more women (65%) than men (62%).

Other things that irked a large share of all respondents included:

• People constantly photographing their food/drinks in restaurants and bars. (41%)

• 'Perfect selfies' on Instagram or other social media, where the person is always 'beautiful'/ airbrushed/ smiling. (38%).