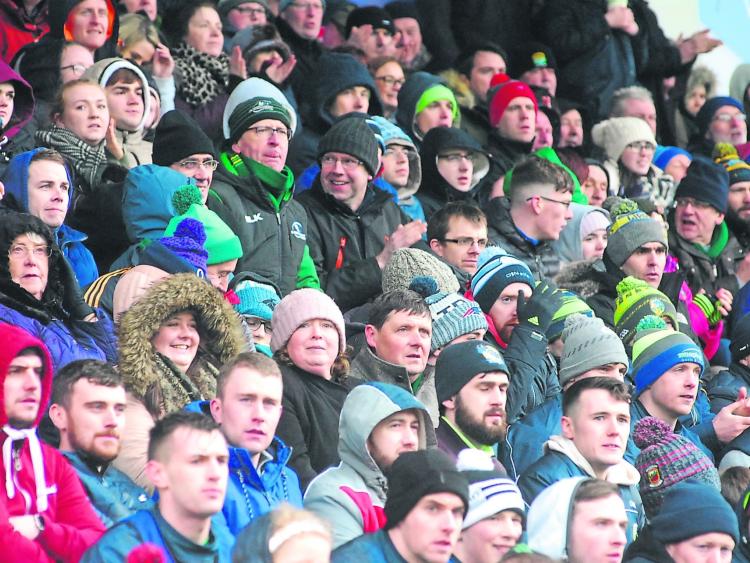 I have decided that our family, as a whole, will from now until at least summer be “fair weather” supporters of Leitrim GAA.

When we jumped on the Leitrim bandwagon and headed to AvantCard Pairc Sean Mac Diarmada for the Antrim game, I must have dreamed that the bandwagon was covered, included padded seats, heating and a lá carte menu, because despite the big win for Leitrim, my experience was not first class.

Being proud and supporting your team is one thing, but dragging two young children to, from and around the county grounds in torrential rain and galeforce wind is too high a level of commitment for me at this time of year.
Who played well? I couldn’t tell you.

To keep the kids warm and occupied I let them loose around the grounds, first on the terrace during the first half and then just to keep it interesting around the seated stand in the second half.
By way of advice to other parents contemplating a fun family day out in Fortress Sean MacDiarmada, the stand is the worst place to sit as the rain hits in, I think the trees at the back of the terrace provide more shelter. And also, the stand is not an ideal place to bring a roving toddler - too steep, I could almost see my baby tripping from the top step and catapulting into midfield.

In terms of tactics, the move from the terrace side to the stand was a bad idea at half time. Yes we met more people we knew, but if keeping dry and comfortable was the aim of our game, our performance in the second half let the whole side down.

Between following the 16-month-old around and keeping him upright; and keeping the four-year-old fed, watered and entertained with trips to the toilet and shop, I didn’t end up seeing a lot of Leitrim’s performance, but what I did see was messy and it reflected our day trip to the county town.

I am all about instilling identity and making memories for your children, but while everyone was leaping around with pure delight at the final whistle against Antrim, I was trying to plan our escape back to the car.
As the Leitrim lads returned to the dressing room after their hard won battle, I was taking on my own - with what could only be described as a rugby hold (sorry lads, I didn’t have any gloves) on my wet, wriggly and quite heavy 16-month-old; I dodged cars and endured bitting rain and wind to make it back to our own fortress. But the stress didn’t stop there, now both kids and adults were hungry and finding a table in Carrick-on-Shannon was no easy feat post match.

I am delighted Leitrim has got promoted from Division 4 and while I promised we would remain armchair supporters and fair weather promoters for the rest of the league - who can turn down the chance to see your county team in Croke Park?!

Despite my bad mood on the way home, you will be delighted to know the children were wet but upbeat. The four-year-old declared it “the best day ever,” but don’t be fooled she got ice-cream after dinner so is easily swayed and has the memory of a goldfish.
But sure it is all about making memories isn’t it … memories of runny noses and coughs and late night wake ups and cursing Leitrim GAA under your breath even when they are finally on a winning streak!