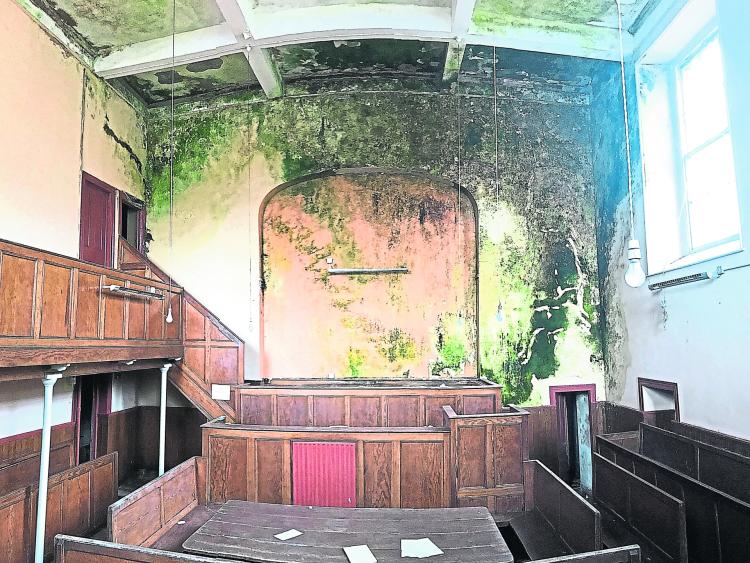 The damage to the historic Ballinamore Courthouse.

Following years of appeals to the Courts Service works to save the historic former Ballinamore courthouse have been given a major boost with confirmation that a contractor will be appointed shortly to carry out works on the listed building.
A letter received by Cllr Caillian Ellis from Leitrim County Council director of services, Joseph Gilhooly, confirmed that the tendering process for the works is “at an advanced stage” and the contractor is expected to be appointed shortly.
“The courts service is pursing this process,” Mr Gilhooly assured Cllr Ellis.
The Ballinamore area councillor welcomed the news that repeated calls for works on this building were finally seeing progress.
“This is something we have been highlighting in the Council
Sadly, although the works will prevent further deterioration of this listed structure, the reality is that much of the interior has been so badly damaged by rot and water ingress, that it cannot be saved.
In the nearly 10 years since the building ceased use as a courthouse it has been targeted by vandals and also fallen into disrepair something locals have been very vocal in their anger over.
Cllr Ellis said that it is disappointing that so much of the structure has been lost but he said that the fact works are now being undertaken will at least ensure the structure can be saved.
“We are hopeful that the water proofing of this building will mean that, when complete, the courts service may consider handing the structure over to Leitrim County Council so that, in the future, an alternative use may be found for this historic building,” noted Cllr Ellis this week.
“This is a very important building locally and it would be wonderful if we could find a way to not just save it, but bring it back into use,” he added.