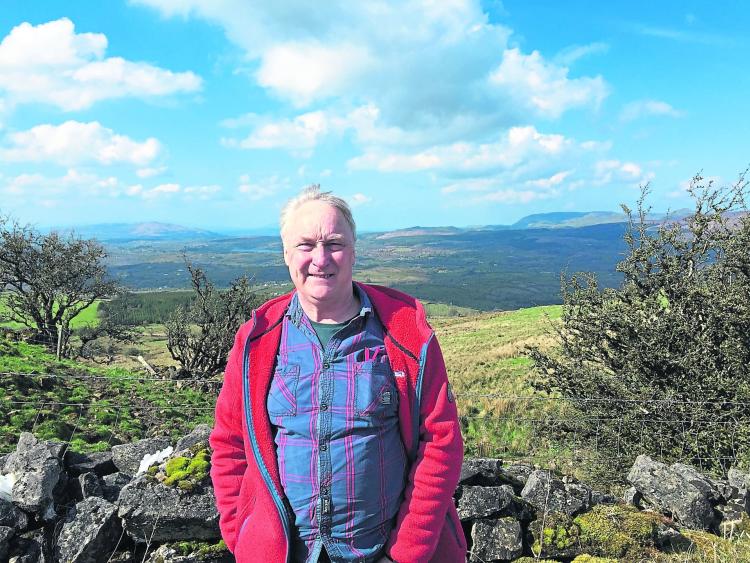 Living in the beautiful surrounds of North Leitrim, playwright and actor Donal O'Kelly speaks of the inspiration provided by Jimmy Gralton's dancehall, his ambitions to travel from the Shannon Pot to Rooskey and the 'well-kept secret' of Leitrim's beauty.

What's your idea of a perfect day, or perfect weekend in Leitrim?
I've often imagined travelling from the Shannon Pot all the way down the river to Rooskey. I'd love to tackle it some time. Wading first after a dip in the Pot - it's always absolutely freezing - and walking, supping, canoeing across Lough Allen from Dowra to Drumshanbo, cruising/walking through Leitrim village to Carrick and on under the bridge in Drumsna and the railway bridge, and I'd have a party at the end in Rooskey where everyone was welcome, absolutely everyone from wherever they may be.

Who has made the greatest contribution to Leitrim in your lifetime - and why?
Dancer and dance teacher Edwina Guckian, for struggling to save Leitrim from sitka spruce darkness while dancing a ray of sunshine into many people's lives, including orphans in Belarus and refugees in Ireland from Syria and other parts of the world.

What's your first Leitrim memory?
Being based in a house somewhere in Manorhamilton with Team Educational Theatre Company in 1980 for a week's tour of schools in the north-west on my first professional acting job - and I got to drive the van. I remember having to be very careful to keep my eyes on the road driving into Sligo above Glencar Lake.

What's your favourite part of the county - and why?
I love down around Effrinagh because it's Jimmy Gralton country. Paul Laverty who wrote the Ken Loach film Jimmy's Hall is an old friend of mine, and I'm proud to have led him and Ken to the story of Jimmy Gralton. I was lucky to be on stage in the cast when the Abbey premiered their stage version in Carrick-on-Shannon in summer 2017. And a whole crowd of us got together back in 2012 to present Jimmy Gralton's Dancehall, the first theatrical telling of the story that I know of, in Leitrim Sculpture Centre, the Rainbow Ballroom of Romance Glenfarne and the Sligo Cairde Festival. I find it inspiring that so many positive visions of how we might arrange ourselves better came out of the hall people built in Effrinagh.

What do you think gives Leitrim its unique identity?
It's the untrodden trail. It's beauty is a well-kept secret. I know secrets can be unhealthy, and it seems crazy not to crow about it - but it's so great the way it is. Everywhere doesn't have to be a tourist marketplace - if we love the place and keep it the way we like it, people will come.

Do you have a favourite local writer or author?
I've found it hard to get over the death of Dermot Healy, who was the person I wrote for a lot of the time. I knew him for thirty years, and I looked up to him very much, his ability to be forensically exact and totally wild at the same time. He's still grossly under-rated. Not Leitrim per se, but very closely connected.

What about a local walk - or view?
I love the view from O'Donnell's Rocks up beyond Glenaboy near Manorhamilton looking west over Lough Gill to Sligo Bay which to my colourblind eyesight is always a pastel colour because it's so shallow.
I also love climbing up to O'Rourke's Table in Newtownmanor, where there's the remains of a wooden dancefloor carried up and laid way back in the 50s to get around the Dancehalls Act. I'd love to have been at a dance up there.

What's the biggest challenge facing the county today?
I think there's a bit of a gap between north Leitrim and south Leitrim - they feel very different. Leitrim is shaped a bit like Italy, and I suppose it's a bit like the way northern Italy looks down on southern Italy - but it's the other way around in Leitrim.
There now, I've got myself in trouble. Ah love that familiar feeling.

If you had the power to change one thing in, or about Leitrim, what would it be?
Not too pleased about the reluctance of some people in positions of relative power to accept the result of the Repeal of the 8th referendum. I'd change that. And I think I do have the power, along with others, to change that.
I think the fracking ban in Ireland is a testament to people power - the people of Leitrim who pulled together over years of struggle to make that happen deserve great credit.