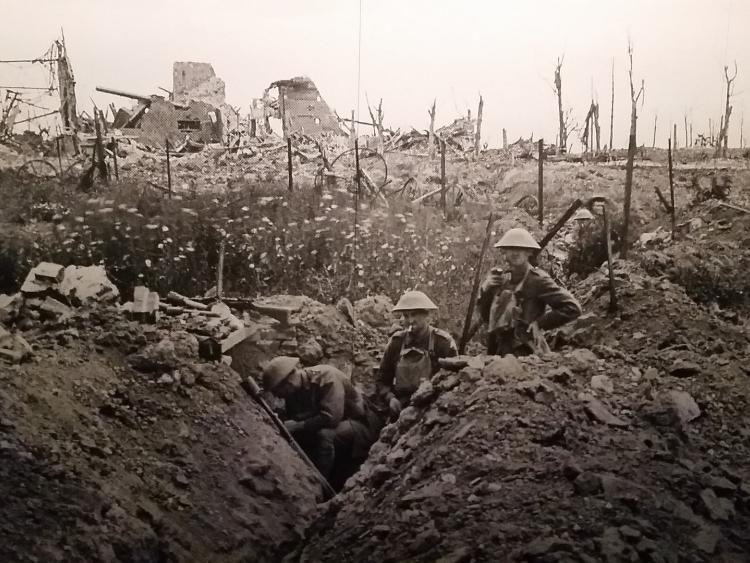 In early November 1914 the inhabitants of Carrick-on-Shannon and other towns in the county had their first, if somewhat harmless experience of World War 1. The booming of the great guns of the British fleet at target practice in Clew Bay near Achill and Clare Islands shook windows in Carrick-on-Shannon and caused “some alarm to the more timid inhabitants for many families in Leitrim and the war did not stay so remote.

Many Leitrim men of all classes and backgrounds served in the Great War. Many were idealistic young men responding to the call to arms of their two elected representatives Messrs. Meehan and Smyth; many were looking for adventure and for others it was a job and a means of supporting their families.

The lucky ones returned home quietly to a country that politically had changed beyond recognition in the years between 1914 and 1918. For those who returned safely, there was no heroes welcome, but if they so desired plenty of opportunity to put their military skills to work as many did helping the IRA. Those who died in World War 1 for the most part can best be described as Leitrim’s forgotten fallen.

From the outbreak of hostilities on August 4, 1914 recruiting meetings became almost a weekly occurrence throughout the county as the establishment did their best to drum up support for the Irish regiments like the Connaught Rangers fighting at the Front.

No opportunity was missed to recruit. Even the County Court judge, Brown, regularly used the courtroom to drum up support.
At Carrick-on-Shannon in April 1916, he told those present: “your sons will be well kept, fed and paid and no longer pass lives of monotonous uselessness in the country.”

This statement smacked of the type of anti-Irishness associated with Kerry Born Lord Kitchener, Commander in Chief of the British Army who, though he despised all Irishmen and everything Irish, told John Redmond, Leader of the Irish Party: “Get me 5,000 men and I will say Thank You; get me 10,000 and I will take off my hat to you.”

Recruiting meetings were held up and down the country. Meetings were usually attended by the county’s two MPs, the High Sheriff, county councillors and military officers.

One of the most consistently used ploys to whip up support was to paint the Germans as monsters on the verge of invading Ireland.

At a recruiting meeting in Manorhamilton in the Spring of 1915, Mr Smyth referred to “atrocities” committed by the Germans in Belgium. He had it “from Cardinal Mercier himself that priests were shot down as you would shoot dogs...and the nuns hunted or killed,” the Observer tells us. In response to this recruiting campaign, a sizeable number of men did go to the front.

In May 1915, Mr Meehan MP told a recruiting meeting in Mohill, that “Manorhamilton is only a small town in North Leitrim with a population of 1,000 inhabitants and it has sent 117 recruits to the army to do their part.”

By March 1916, a Cpt Kelly of the Department of Recruiting for Ireland told a recruiting conference in Carrick-on-Shannon “recruitable men, to date (in Leitrim) were 5,513 and the amount of men recruited represented three in every 100 of the population.”

However, by the end of the year, the recruiting drive in Leitrim was for all intents and purposes irrelevant as the events of Easter Week 1916 unleashed the “terrible beauty” of nationalism.

Of the sizeable number of Leitrim’s youth , who did “don the khaki”, many were not to return and the paper recorded the fate of the young men from all over the county, who lost their lives in the bloody trenches of that terrible conflict.

While the latest details on the big land and naval battles dominated the news columns in the Observer, the most poignant and heart wrenching reports were those telling about Leitrim natives at the front.

The Observer of November 7, 1915 reports that 270 Leitrim men died in the war but this figure is likely to be on the conservative side as many exiles, living in Great Britain, joined the army too. 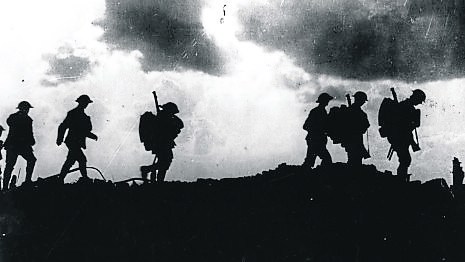 Almost weekly, the Observer carried reports of fallen Leitrim soldiers. Typical of these reports was one carried in the edition of June 19, 1915 which states: “At the end of last week, the death was reported of Patrick O’Connor of Mohill in the 2nd Battalion Connaught Rangers, who was recently killed in action in France. The deceased soldier joined the battalion at the general mobilisation on the declaration of war on the 2nd of August. He leaves a wife and a large family to mourn his loss. His death makes the tenth man now killed in the war, including that of Cpt. H L Crofton of Larkfield.”

Some were luckier and were able to regale their family and friends back home with vivid accounts of their narrow escapes.
One such account can be found in the issue of March 6, 1915. Carrick-on-Shannon man Daniel Carr was told, in a letter from his son Jim, Army Service Corps: “I was sent with a number of others on convoy duty - that is carrying up food supplies to the front. All went well until we came to a place called Armentiers. We believed there was not a German within three mile of us when all of a sudden bang goes the shells all round us. Down goes men and horses all in a heap. I was on my feet in a minute and I looked around could only see four more chaps. We made a rush for the nearest trench for shelter, thinking we would be safe there until a reserve force would come up, which we knew was close behind us, but the next shell struck the trench and actually buried us alive. 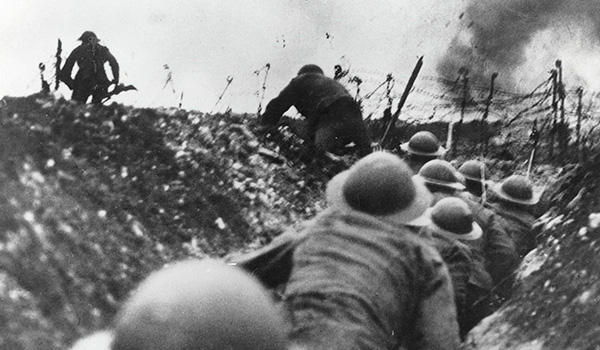 “I remembered no more as I was knocked insensitive until I awoke in hospital and when I came to a bit, I asked what about my pals and was told we were dug out and that the other two were dead. That was my third adventure, but the last the worst. I was 16 days in hospital in France and I am now in hospital in Sheffield and hope to be home in a few weeks time to see you.”
Leitrim soldiers were decorated for gallantry at the Front. The first Leitrim man to receive a double distinction was Carrick native Corporal Francis Doyle, North Lancashires, who was awarded the MM and DCM “for rescuing wounded and carrying rations across the open under heavy fire.” According to the report, two other brothers, Charles and Thad, were also serving at the Front.

As in all wars, parents dreaded the telegram, which almost became a symbol of “bad news”. One such mother to receive the bad news was a Mrs Ellen Rodgers, Carrick-on-Shannon, who in July 1916 was informed of the circumstances of the death of her son Pte William Rodgers.

The letter read: “Dear Mrs Rodgers, it is very painful to me to have to write to you that Pte Rodgers was killed in action on the 1st of July 1916 and was buried in Noeux-le-mines. It will be some consolation to you to know that he died like a good, brave soldier in the front line trenches. No better or quieter soldier have I lost and he is greatly missed by all the section. You and his people have my deepest sympathy. G Haire Bt MGO 6th Connaught Rangers.”

Sadly the paper records that Pte Rodgers was the second of three brothers serving at the front to have fallen.