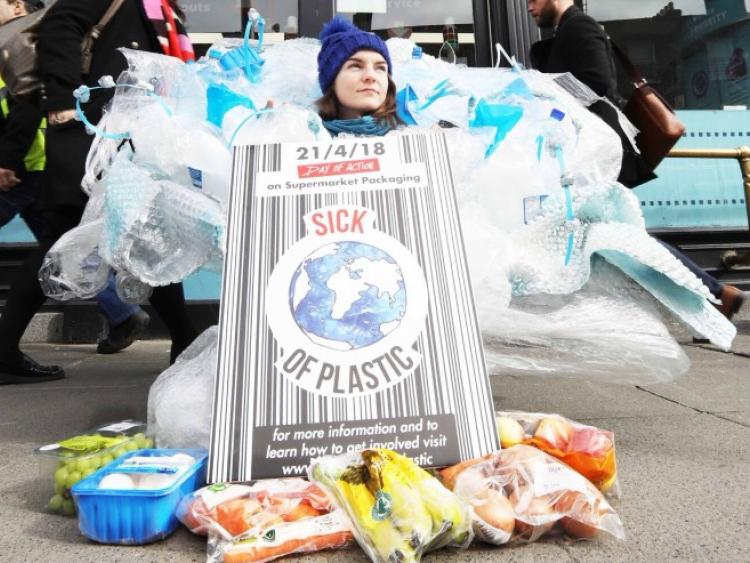 Single use plastics are having a dramatic impact on our environment and our lives.

Leitrim households will generate over 1,800 tonnes of single-use plastic packaging waste in 2019.

The rapidly increasing pace of life means we now consume more and more food and snacks on the go. This decade alone has seen a 30% increase in the sales of takeout and packaged foods.  This has resulted in a significant spike in the use of single-use plastic packaging across County Leitrim, with disposable coffee cups, water bottles and takeout food packaging amongst the biggest offenders.

The impact of single-use plastic packaging goes far beyond the images we have all become accustomed to in recent years; beaches covered in discarded plastic; sea mammals and birds dying or dead, having suffocated on, or become entangled in plastic waste.

Every tonne of single-use plastic packaging waste generated in County Leitrim produces on average 6 tonnes of CO2 emissions; 4 tonnes from its petrochemical based production process and a further 2 tonnes linked to transportation and the incineration or recycling process.

The 1,800  tonnes of single-use plastic waste generated in Co Leitrim in 2019 will generate in the region of 10,800 tonnes of CO2 emissions.

Meanwhile, the health risks posed by single-use plastic are not yet quantified or even understood. However, an Australian scientist at the University of New South Wales recently reported that we each ingest a credit card worth of plastic every week (in weight), through micro plastics present in our food and drinks.

In June 2019, Swiss Scientist at the Food Packaging Forum Foundation reported that plastic food packaging contains 148 hazardous chemical compounds, characterised as carcinogens or hormone disruptors; others are known to be harmful to reproduction.

Locally, 30% (over 540 tonnes) of the plastic packaging waste generated in County Leitrim this year is unaccounted for in the waste stream. This waste is dumped illegally, discarded carelessly or exported. A significant portion of this will leach into the local environment, polluting the soil, rivers and lakes of Co Leitrim beyond the year 2400.

Globally, the billions of tonnes of plastic waste dumped in our oceans over the past four decades is slowing breaking down into smaller micro plastic particles. This has resulted in ocean surface temperatures rising, as trillions upon trillions of micro plastic particles absorb increasing amounts of sunlight.  Higher surface temperatures in our oceans effect the scale and patterns of precipitation, resulting in increasingly violent tropical storms, cyclones and tornadoes, which wreak havoc on some of the poorest developing nations on our planet.

Ruddy added "Our research highlighted a significant level of ambivalence amongst the broader population towards the issue of single-use plastic – not because people don’t care, but due to the way the crises is reported, more often described in the ‘hundreds of millions’ or even ‘billions’ of tonnes. This leaves people wondering ‘what’s the point – my small contribution is hardly going to make any real difference."

The CUSP Initiative, starting March 2020 - #MarchAgainstSingleUse - distils-down the challenge into smaller, bite-sized tasks that will amplify the significance of the contribution of individuals and communities by measuring and collating their achievement.

"We want to harness the power of community spirit in the battle against single-use plastic packaging," said Ruddy.

At the beginning of March 2020, participants spend just 10 minutes inputting their current monthly usage (in units) into CUSP’s online calculator or mobile app, across a range of 30 of the more common items of single-use plastic packaging found in Irish homes.

Weights and corresponding CO2 emissions from each item of plastic are pre-loaded and automatically totalled, providing participants with their current monthly impact.

At the end of March, participants across Co Leitrim simply input their reduced usage over that month (in units). CUSP platforms converts this to kilograms for both plastic and CO2 emissions linked to that plastic, providing individuals and communities with real numbers, in terms of their contribution in the battle against the scourge of single-use plastic packaging and climate change.