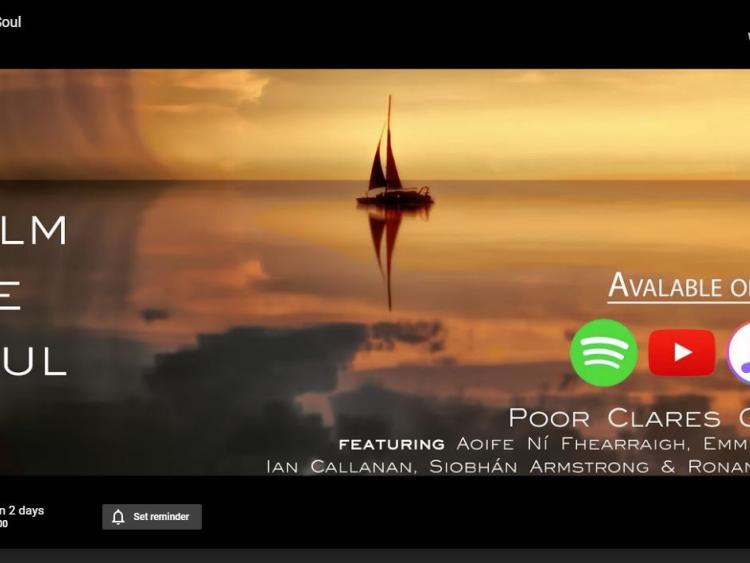 The song, Calm the Soul, is being released this week.

The Poor Clare nuns in Galway released a song this week called 'Calm the Soul.' The song is inspired by a poem from their best-selling book of the same name which they brought out in 2012.

Speaking in advance of the launch the abbess of the monastery, Sr. Colette said: “This simple poem touched people who read it so deeply that we thought that a musical setting to the words could make it more widely accessible. We began to experiment with various tunes and came up with a melody that draws on the musical motifs of a traditional Irish love song, and it seems to really capture the mood of the poem.

“We decided to launch the song ahead of World Mental Health Day, because we know from our experience of people requesting prayers, that mental health challenges are a huge concern, especially in families.  The pace of life today has caused a huge increase in the stress levels that people are dealing with.  We feel the message of this prayer-song helps to put things in perspective.”

The sisters also hope to raise awareness, through the release of the song, of the plight of persecuted Christians and they have included a section on their website highlighting this. www.poorclares.ie/ persecuted-christians-.

The project has turned into an unprecedented recording venture for the nuns, who have been helped by professional artists as well as friends, in the production of the song.  Sr. Colette continued:

Ronan Browne, the piper and flautist for the project said: “Not only has it been a privilege to work on ‘Calm the Soul’, but it is also a wonderful adventure.   I was honoured that the sisters thought to invite me to contribute to sharing this essential prayer-poem with the many who need it in our manic and often-uncaring modern times”

Ian Callanan, the arranger and producer of ‘Calm the Soul’ said: “From the moment the sisters asked me to typeset a song they had written, to what has become one of the most exciting projects I have been involved in, Calm the Soul has been a journey, spiritually, mentally and musically. The music and text are infectious. It is an honour to be part of this project in a time when so many need to hear these words of calm in their lives.”

You can find out more about the song including information on how to obtain a copy of it via the following sites: