The demise of Manorhamilton's castle in 1562 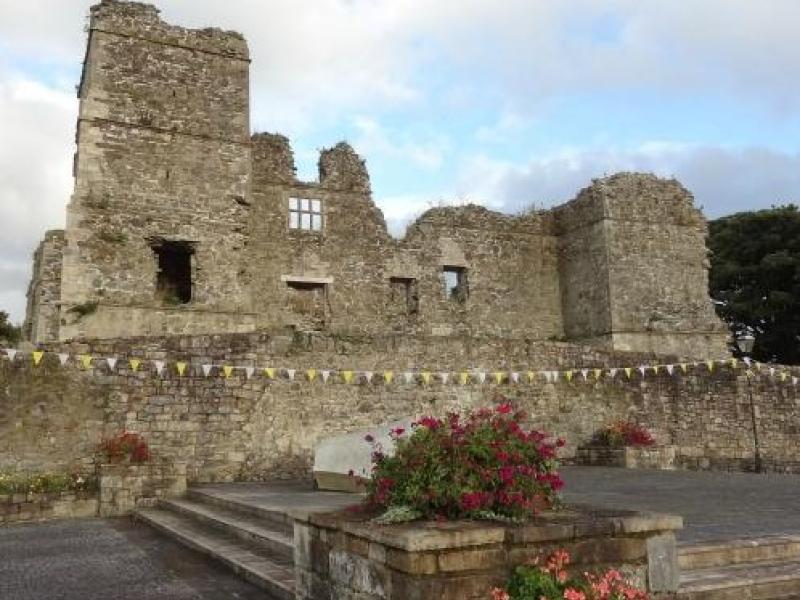 The demise of Manorhamilton castle and the town occurred in 1562 when both were burned by the Galway based Earl of Clanrickard Ulick MacRichard Burke in what was one of the last acts of the English civil war that took place in Ireland from 1641 on between the supporters of English civil war parliamentarians and royalists followers of King Charles I.
The castle’s owner Sir Frederick Hamilton supported the parliamentarians in the civil war but he had returned to his native Scotland earlier in the 1640s and it was in Scotland where he died in 1647.
The fifth Earl of Clanrickard, Ulick MacRichard Burke Portumna took the royalist side in the civil war and at the time of the burning of Manorhamilton castle he was leading the Irish loyalist forces against the Cromwellian army that had come over to Ireland in 1649 to conquer the country following the ending of the civil war in England, which the parliamentary forces won.
The ruins of Manorhamilton castle that are the town’s focal point since 1652 resulted from the burning of Sir Frederick Hamilton’s baronial mansion 359 years ago.
Meanwhile sometime after the civil war commenced the Irish royalists’ forces that set up a camp on top of Pound Hill, Lurganboy towards the end of January 1642 and attacked Hamilton’s castle for a period of approximately 12 months.
Writing in “Lurganboy – A Social History” (2000) local historian Prin Duignan in his description these events notes “the rebel forces under Brian McDonagh and Lord Taafe’s son and the Leitrim forces under Colonel Owen O’Rourke aided by Colonel Con McDonnell O’Rourke from Jamestown and the McGaurans of West Cavan at encamped at Lurganboy near Manorhamilton.
“From Pound Hill the castle at Manorhamilton was quite visible. Lurganboy, which at the time belonged to Thomas Abercromby, was the rebel headquarters in all their assaults on Manorhamilton over the next year or so.
“On 25th January they seized four or five hundred of Hamilton’s cows and burned much of his winter supply of corn. On 30th January they burned Manorhamilton town and Sir Fredrick was forced to take its inhabitants within the walls of the castle.
“As a reprisal for the burning, Hamilton had Con O’Rourke and Conor McLoughlin, prisoners in the castle, hanged in view of the rebels. This brought counter-reprisals from the O’Rourkes who hanged a number of English prisoners, including two Protestant ministers, William Liston and Thomas Fullerton, who were held at Dromahair.”