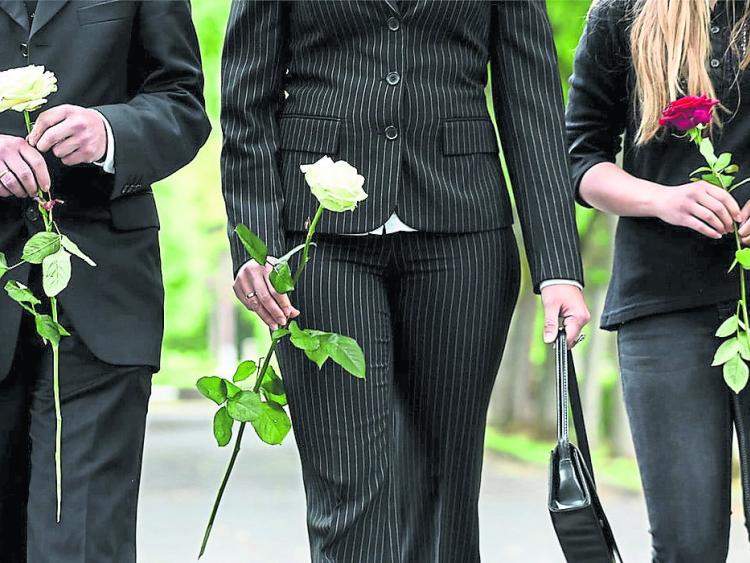 Funerals and wakes are part of the Irish ritual. It’s a time when the bereaved family is normally enveloped in a communal hug throughout which small rituals help to share the burden of loss

Only when a ritual is taken away is its power revealed. By their very nature, rituals have become so embedded into our lives they become barely perceptible.
Carl Jung would say they affect our ‘collective unconscious’ – the shared elements of our unconscious minds. They connect us on a level beyond the physical forms they manifest.

They have many origins: Pagan, Christian, tribal, evolutionary. They have been passed down from generation to generation and play many important roles in our lives. This is, I find, particularly true during periods of transition: from adolescence to adulthood, from season to season, from life to death.
An example suspended by the Covid-19 crisis, and therefore brought into shape focus, is the rituals we bring to the Irish wake and funeral. I touched on this in a recent column when marking the death of Ben Lennon.
In the past few weeks two good friends have lost their fathers following illnesses.
It’s a time when the bereaved family is normally enveloped in a communal hug throughout which small rituals help to share the burden of loss and celebrate the life lived.
The GAA club coordinates parking on along tight rural roads and provide a guard of honour outside the church; neighbours bring food to the wake-house, knowing the bereaved often forgot to feed themselves; friends provide music at the service or graveside that reflect the wishes of the family and the life of the departed; handshakes and hugs express what words can’t.
Down through the years, Paddy and Margaret Flynn contributed to many such rituals when paying their respects to loved ones, friends, and neighbours.

I am fortunate to have experienced the hospitality and warmth of their Gorvagh homestead (as famous as the hill beside which it stands) through my long friendship with their son Padraig ‘P’ Flynn.

Padraig and I soldiered together for Leitrim at underage and senior level, lining out with numbers eight and nine on our backs in a particularly memorable Connacht U21 championship semi-final outing against Mayo in Castlebar in the summer of 1995.

As our horizons broadened, we both spent a couple of years living in the States and played for the same team in Boston, St. Colmcille’s (despite P being resident in Richmond Virginia, but sin scéal eile).

Anyone from my era who has played club football in Leitrim is also all well familiar with facing Fenagh’s ‘Three Flynn Towers’ of Padraig, Niall, and Brendan. I’d rather feed them for a day than a week, as my father used to quip.
I spoke with Padraig last week following the death of his father Paddy.

We hear a lot about the Irish man’s inability to articulate his deeper emotions and feelings. But the dignity and respect with which Padraig spoke of his father stayed with me and left me deeply touched.
I wish every son such a gift during his father’s final days, and every father the gift of such a legacy too.
We both love a good handshake when we meet up and it was, P noted, one of the rituals that he most missed during his father’s funeral.
However, the response to Paddy’s passing will also live long with the family, he noted, and will offer them great solace in the times ahead.
Within the restrictions of social distancing, the community provided a dignified guard of honour across Selton Hill. Here, Padraig noticed that some of those who returned to the parish to pay their respects chose to stand sentinel at the gate of the house once occupied by their family.

Houses, in some cases, no longer occupied at all. It created a great link, Padraig said, between two eras and filled in threads of the tapestry of that close-knit community that time had inevitably unwoven. “It didn’t go unnoticed,” was how P put it.
Fenagh GAA provided the guard of honour at Gorvagh Church; saluting Paddy, captain of Fenagh’s 1967 Junior championship winning team (the last club captain to raise aloft a championship cup prior to their Intermediate success in 2018).
From Gorvagh to Mohill cemetery, people took to the road to pay their respects and to let the family know ‘we’re with you in thought, spirit, and prayer’ even though we can’t be by your side.
The use of the online book of condolences too allowed those near and far to connect with Margaret, Padraig, Niall, and Brendan, Stephanie, Mary, and Deidre, Paddy’s beloved grandchildren and all the extended family.

Looking through the messages the word that appears most is that of gentleman, and that was the very word that first sprung to mind when I received the text from Fergal McGill letting me know that Paddy had passed away.
Scrolling through the messages, one from Enda and Christina Gilraine really jumped out at me. It read:
‘Paddy loved Family, Football, Farming, and Fenagh’.

If any life could be surmised in four words, you’d be hard fought to find four more fitting: the people he loved, the game he loved, the life he loved, and the place he loved. May he rest in peace.
Liatroim abú.