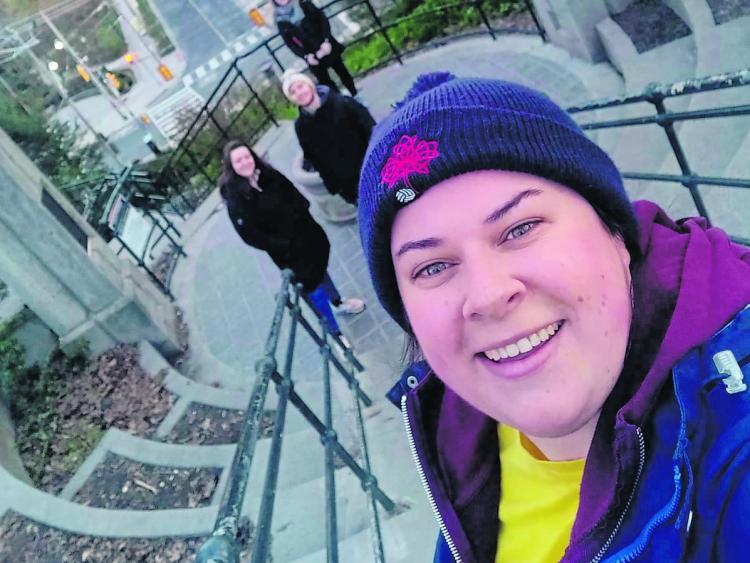 On the Friday, May 8 I spent many hours finishing a book I had been meaning to read since Christmas, which my mother gave me when I was back in Ireland.
In the final chapters, the main characters meet by chance but there's a strong feeling it wasn't just down to chance but they were led there by someone looking down on them, pointing them in the right direction.
Without a group event happening this year for Darkness into Light, our GAA club in Toronto had suggested people to do their own walk and donate to raise awareness for Pieta house.
On the morning of Saturday, May 9 myself and my cousin Catherine, who I live with, set out at 5.40am (10 minutes later than expected) on our walk. We decided to go to the Baldwin Steps, which is a famous site in Toronto, as they give a great view of the city for the sunrise.
On getting to the steps we could see a couple already there taking in the view. I turned - rolling my eyes - and said we wouldn't be able to get a good photo now as there was already someone there.
As we stood a few steps back from the couple as they looked out over the city, something looked very familiar - it wasn't until they turned to a side profile I could see if was my other cousin Kevin, and his girlfriend Ciara, who we haven't seen in weeks due to the social distancing.
Out of 2.9 million people in Toronto and the hundreds of Irish that could have been out doing the Darkness into Light walk, by chance, we happened to be the only people there at that moment - coming from different directions and only planning to spend a couple of minutes at that exact spot.
At a time where seeing a familiar face in Toronto isn't commonplace, a 5 minute chat really lifted the spirits.
It could have been chance, but I like to think it was Granny and Granda looking down on us giving us a bit of hope and a reminder that family is everything.