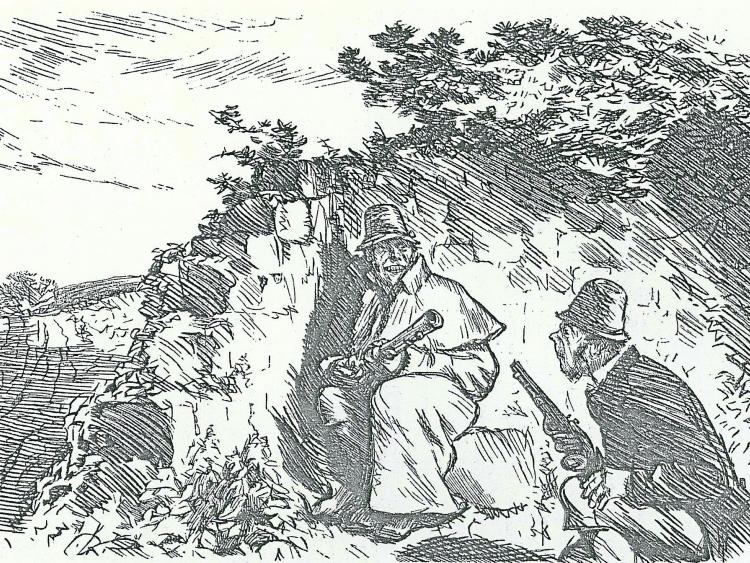 Punch cartoon July 1878, depicting the assassination of Lord Leitrim. The caption on the original read: Waiting for the landlord, by Charles Keene, 1878

Lord Leitrim laid out alone 'without a single circumstance of dignity’.

After his assassination at Cratlagh Wood on 2 April 1878, Lord Leitrim’s body was taken to Milford for inquest, along with that of John Makim, the court clerk who had also been killed in the ambush.
The bodies were laid out in a narrow chamber with bare whitewashed walls on plain deal tables. The contrast between the two men in death was marked. Makim was surrounded by friends ‘expressing their wild grief and singing praises and prayers’, while his ‘unhappy master’, for all his wealth and status, lay alone, ‘without a single circumstance of dignity’.
Robert Clements, the earl’s nephew and prospective heir, was in Paris when he got word of the murders.
He set off immediately for Donegal where he waited until 8 April when Lord Leitrim’s body was released for removal. Robert accompanied the body on the long journey from Milford back to Killadoon, travelling via Letterkenny and Strabane, and onwards by rail to Dublin.

On 10 April, the funeral cortège made its way from Killadoon to Dublin for internment at St Michan’s church. By the time the mourners reached the city, word had spread of the earl’s death, and groups of hecklers hurled abuse at the coffin as it passed along the Liffey.
At half-past two, the procession reached the bottom of Church Street. The Times reported the disorderly scene as the chief mourners and gentry ‘were charged and literally hurled back from its vicinity’.
The hearse was surrounded by a large mob who ‘shouted, cheered, hissed, and threatened’ and ‘made to open the door of the hearse, and get at the remains’.
This went on for twenty minutes, with the police unable to impose any order until twenty-five policemen arrived. Even then, the police and mob clashed several times before the undertakers were finally able to remove the coffin.
Robert Clements and John Ynyr Burges, Lord Leitrim’s brother-in-law, were astounded at the size and anger of the mob, which continued shouting and cheering even through the burial service. In the end, Robert Clements feared the crowd so much that he alone accompanied the coffin as it was interred in the family vault inside the church.
After the service, Robert and the chief mourners had to be escorted out by a seldom-used back gate.

Various rewards were offered for the identification of Lord Leitrim’s killers. The heir to the earldom, Robert Clements, was reported as offering £10,000. A group of thirty magistrates raised £6,000 from a few allies.
The government offered a £500 reward, though required information to be submitted within six months – not a great indication of any enthusiasm to apprehend the assassins. Officially, no information was forthcoming, and the rewards went unclaimed. In the 1960s, it emerged that information had, in fact, been gained by the Lord Lieutenant’s agent (for 17 shillings), but had been filed away in Dublin Castle and ignored.

The truth was, in the decades after his death, Lord Leitrim was neither mourned by his tenants nor defended by his peers.
The earl’s killers were lauded locally as heroes who ended the tyranny of landlordism in Ireland.
Back at Lough Rynn, few, if any, expressions of regret were received from tenants on smallholdings, though the Castle did receive letters of regret from some of the earl’s larger leaseholders.
The Orange Lodge in Mohill, meeting in the town’s courthouse, declared that its members ‘sing the praises of Lord Leitrim, and proclaim to the world that he was a chaste God-fearing man and a kind indulgent landlord and that anyone who would say otherwise are traitors’.
Two of the earl’s principal tenants, his doctor and solicitor, led a large meeting in Mohill where seventy farmers signed a letter of condolence and noted that, ‘No man did more for his tenantry than Lord Leitrim did. His chief aim was for their welfare’.
On the Saturday following Lord Leitrim’s funeral, The Irish Times published a letter from ‘A Tenant-Farmer’ from Mohill (not a tenant of Lord Leitrim). The writer noted that the earl was a resident landlord who gave employment to hundreds of workmen.
The average wage bill for Lough Rynn was, he wrote, £80 per week and ‘many a poor tenant . . . earned not only his rent during the winter months, but also what kept himself and his family in comparative comfort’.

While acknowledging Lord Leitrim’s many faults, and that much of peace and prosperity on the estate was brought about by ‘harsh measures and by ruling with a rod of iron’, Lord Leitrim’s labourers had, he said ‘fair regular wages, neat cottages, each a cow’s grass, and their children educated and clothed at Lord’ Leitrim’s expense’.
He wrote: ‘Whatever firebrands may say of it, the tenants on the estate are now better housed, better clad, have more stock, are richer, and their lands better laid out and better cultivated’.
He also claimed that the earl’s rents were far from being rack rents, and having ‘known the property upwards of 50 years . . . it is in the hands of a peaceful and prosperous tenantry’.
Most of the people of Lough Rynn at least seemed to be at one in mourning the twenty-three year old John Makim who had only recently moved to Milford from Rynn.
His funeral cortège was met outside Mohill by a ‘vast number’ of tenantry and estate employees, and shops closed until the ‘beautiful, solemn burial service’ was concluded.