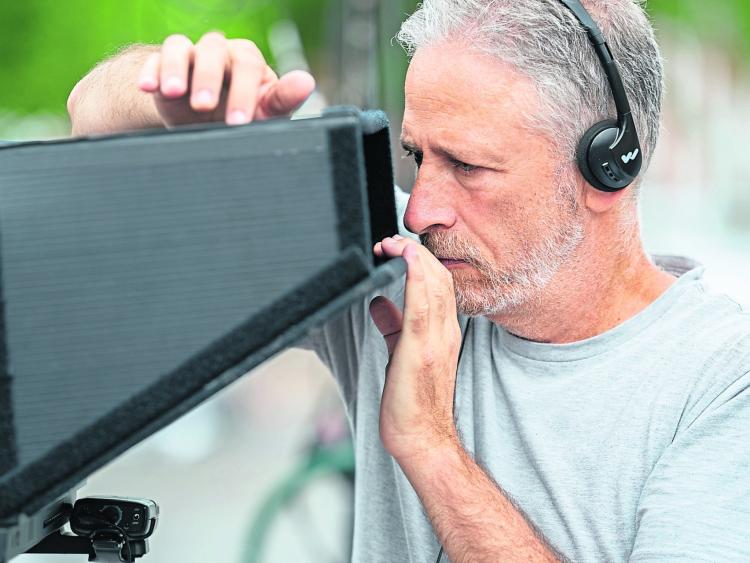 Former Daily Show host Jon Stewart is back in the spotlight to turn his attention to the problem with current politics.

Jon Stewart has been out of the spotlight for a little while. The comedian, who hosted The Daily Show for 16 years until 2015, has gone quiet ever since he left the satirical programme and was replaced by Trevor Noah.
Now he is back with a political satire he has written and directed, about a local election that ends up being thrust into the national spotlight.
“It’s kind of odd,” he says frankly from the attic of his house, where the 57-year-old is seated in front of his now-grown up children’s old chalkboard, covered in their doodles.
“I was saying to my friend that I’ve made a light-hearted political romp in a time of great tragedy, and he said it’s sort of like showing up at a plane crash with a chocolate bar.
“You’ve kind of walked in and you’re like ‘hey, anyone want some chocolate?’ They are like ‘Yeah, not really what we need right now?'”
But romp aside, Stewart’s film addresses what he sees as a broken system, which comes out right at a time when people are marching on the streets of cities all around the US in support of the Black Lives Matter movement, demanding these systems be changed.
“I think having been an observer and commentator of it for 16 years, doing it kind of topically, I spent so much time looking at it through the tube, you get a very myopic view.
“What I began to feel like this is all just very cyclical and very redundant and the intensity of it just keeps growing and it was like an eddy and I felt like we couldn’t escape its gravitational pull of that eddy.
“So I wanted to think about it like that was the weather, but what is the climate?
“And can we step back and look at this cyclone from up here and maybe be better diagnosticians about what we might do to pull us out of this maelstrom?”
And stepping away and widening his view has reassured him that the system can be fixed.
“It’s absolutely capable of change and I think what you’re seeing is it can be changed through incremental reform or cataclysmic upheaval.
“I think sometimes when you prevent incremental reform, as John Kennedy once said, if you make non-violent reform impossible you make violent revolution inevitable.”
In fact Stewart believes the current occupant of the White House might actually be instrumental in bringing about that change.
“What you’re seeing from people, what they are saying is this is not tenable, the path we are on is not tenable, and we have to address that in a meaningful, non-Twitter time, reaction.
“It’s a response that is going to take will and stamina and attention and I am hopeful because as Donald Trump said ‘I’m going to make America great again,’ I just think he doesn’t realise it will not be in the way that he intended.
“I think what you are going to see is a grassroots dissatisfaction with the corruption and that is going to bring us hopefully to a better result.”
It was Stewart’s insight and expertise after his long history observing the political structures that made him uniquely placed to write a film about its failings, according to one of the film’s stars, Rose Byrne.
“I think you need someone like Jon Stewart,” the actress says thoughtfully, “who is a singular voice.
“His understanding of it is so sophisticated and he can explain it to a layman like me, or he can talk to a pundit like a Bill O’Reilly and the legendary arguments they would have when they both had their shows, so he really is an anomaly like that.”
To prepare for her role as a Republican strategist, who is embroiled in a feud with a Democratic strategist played by Steve Carell, Stewart pointed her in the direction of The War Room, the famous documentary by D.A. Pennebaker and Chris Hegedus about the 1992 Clinton campaign for president.
“There is the great character of James Carville, who was the head of his campaign, and then Mary Matalin who was the Republican strategist (and went on to marry Carville) and they have a relationship in real life but they were on different sides of the political divide.
“So that was a great source of inspiration, the sort of sparring chemistry they had and deeply opposing ideas but the sexiness between them and that was one of the relationships he was inspired by.”
Looking back to campaigns of the past might be necessary when current politics and the US news networks that cover it appear beyond satire.
“You can’t satirise it,” Byrne says emphatically.
“It’s already satirical enough when you watch it, it’s like so larger than life.
“The news has become this circus of information, so how do you satirise something that is already making fun of itself?
“I have gone through phases of news media diets of what I will watch and won’t.
“I’ve gone through diets of just really going the opposite way and watching a lot of very conservative media, a lot more cult personality types, to see the whole landscape, because those programmes are so popular and are defining so many people’s political views.
“But then I’ve had the range where I don’t watch anything at all.”