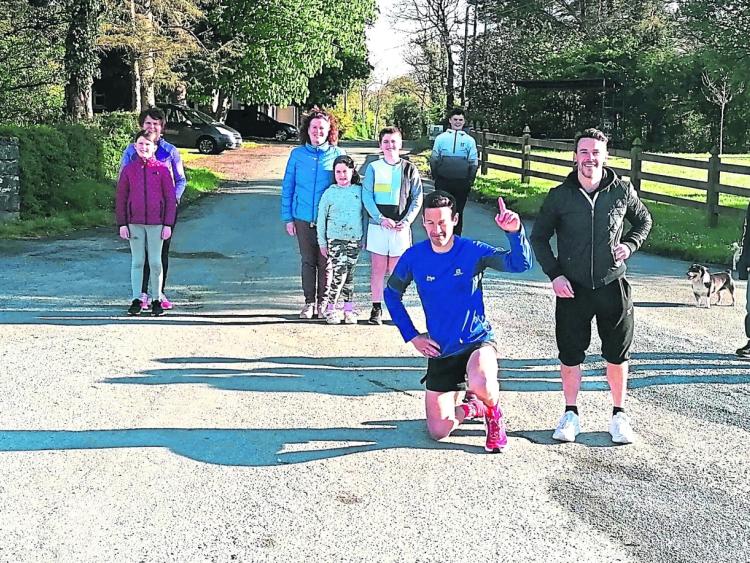 The month of May started off with a fabulous feat when ultramarathon runner, Alan Wynne, completed a 19 loop 119km fundraising run for frontline workers in 13 hours and 51 minutes on May 1.
Starting at 5am, Alan who lives in Kilnagross, kept up the pace until he had completed his mammoth 119km goal.
Described as a 'superhero' by his family, Alan had already raised €11,500 for frontline services in Cavan General Hospital and Drumsna Meals on Wheels by the time we went to press on Wednesday, May 6.
After completing the run, Alan took to his gofundme page to thank everyone who donated and spurred him on during his fundraiser.

In another good venture, Leitrim GAA, working closely with Leitrim County Council, Leitrim Sports Partnership, Leitrim PPN and Leitrim Age Friendly, launched an initiative to make a difference to people who were feeling very isolated and alone in the restricted times of Covid-19.
People aged 70 and over were ‘cocooning’ at this time and were all but confined to the limits of their four walls.
For many, the trip to the shop, the church and the local football pitch was a way of life and a daily or weekly event and such trips were no longer available to them.
Leitrim GAA set up a service that offered a degree of respite to those who were missing their GAA in particular, asking the public to nominate someone in their area who would like a call from a person in Leitrim GAA, be that a current or former player or official.
A Well Being Pack from the Leitrim Covid-19 Community Response Forum was also sent out to 1,500 older people as part of its ‘In This Together’ campaign which aimed to assist them to stay connected, stay active and look after their mental wellbeing throughout the Covid-19 emergency.

May also saw the Taoiseach announce a roadmap for the reopening of our society and businesses in a phased manner.
In that regard, Cathaoirleach of Leitrim County Council, Cllr Enda McGloin urged people to support local businesses now more than ever and put money back into the local economy.

It was truly a month of initiatives with the GAA's 'Supporting Others' campaign organised by Leitrim Senior players and supported by past players, raising in excess of €20,000 for Sláinte 2020 and Pieta House.

In other news this month, hundreds of homes and farms faced water disruptions after a number of water main bursts in the south Leitrim area.
Two mains burst in Mohill and one in Keshcarrigan leading to difficulties for people during a dry spell of weather.

Meanwhile, Leitrim's luckiest Lotto shop, McGowan's Spar in Kinlough, hit the headlines once again by selling a ticket that earned one lucky punter a whopping €96,000.
The shop had previously sold a Lotto jackpot winning ticket worth €11.1 million and also a Daily Million winning ticket worth a cool €1,000,000.

Despite the hardship of Covid-19 on local businesses, there was good news for two innovative local food producers when Dromod Boxty and Jinny's Bakery, Drumshanbo were both selected for their products to go on nationwide sale in Aldi as part of the supermarket chain's Specialbuys event.