MOVIE REVIEW: Disney's 'Jungle Cruise' is the adventure of a lifetime 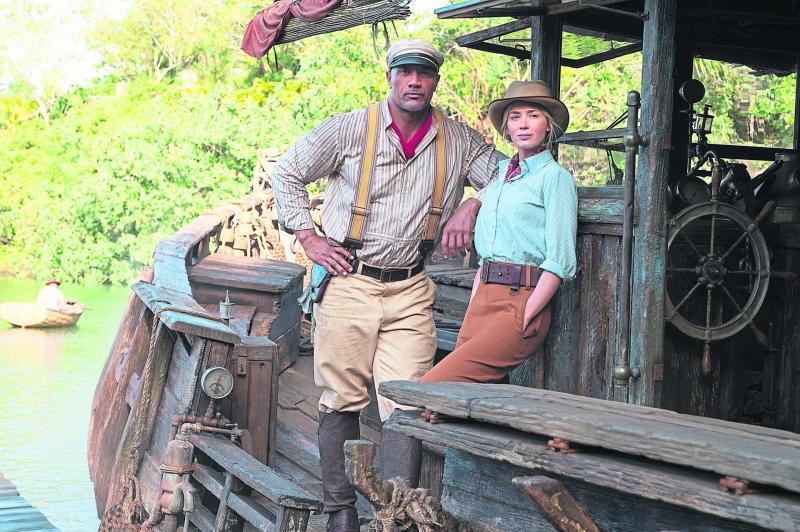 With gruff , wisecracking skipper Frank Wolff (Dwayne Johnson) at the helm of the La Quila—his ramshackle -but-charming boat, the adventure of a lifetime is about to begin!

At the height of World War I, determined researcher Dr. Lily Houghton (Emily Blunt) enlists Frank’s questitionable services to guide her down the deepest and most dangerous parts of the Amazon River. She hopes to uncover the mystery of an ancient tribal artitifact—a legendary relic with the power to change the fate of humanity.

With rival riverboat tour operator Nilo out to get Frank and a relentless European prince on their heels, the unlikely duo, who are at odds, fi nd themselves thrust on the epic quest together. With Lily’s brother MacGregor, a proper English gentleman along for the ride, they encounter innumerable dangers, from wild animals to formidable foes and even supernatural threats, all lurking in the deceptitive beauty of the lush rain forest.

But as the secrets of the lost relic unfold, the stakes of Lily and Frank’s search reach ever higher as enemy forces close in and their fate—and mankind’s—hangs in the balance.

“‘Jungle Cruise’ is about adventure and about life, and living a full life,” says Dwayne Johnson, who is also a producer on the film. “And being aware of that and breaking through barriers by doing things beyond what people think are your limits. ‘Jungle Cruise’ is an adventure: it’s fun, it’s magical, it’s mystitical, it’s dangerous, it’s exciting.”

“Jungle Cruise” was inspired by the hilariously pun-fueled riverboat adventure ride that has resonated with kids of every age for close to 65 years. “People love the Jungle Cruise attraction because of its rich history and its traditition,” says Dwayne Johnson.

"There’s a unique quality to Jungle Cruise that still feels as if it were fifty or sixty years ago. But that’s the charm of it. When you go around the world to some of these other parks, you see their iterations of Jungle Cruise that are just spectacular. I feel there’s a wish fulfillment factor for the audience that happens with the Jungle Cruise ride. That wish fulfillment, I believe, is the idea that you are being transported, and you are going on truly the adventure and ride of a lifetime.”

“From the beginning we wanted to ensure that every element of the Jungle Cruise aƩ racti on—the spirit and great reverence that we have for it and Walt—are in the movie,” remarks Johnson.

“We’ve worked closely with the tremendously talented team of Disney Imagineers to make sure that we are servicing all these memorable moments and integrati ng them into this epic adventure. This is what makes this project so very special. It’s been years in the making to pay homage to this wonderful piece of Disneyland history and we’re very, very excited about making a great movie that honors and respects the Jungle Cruise ride.”

Director Jaume Collet-Serra was excited to have Dwayne Johnson in the leading-man role, and recalls their early conversation.

“I told him that I had not seen him in a role like this, but I thought that he would do great. He really stepped into the shoot and was not afraid to be a bit more vulnerable on screen, and not just be the alpha male that he is normally doing. He’s the biggest star in the world, so at this point I think he’s okay taking some risks, and I think that he felt comfortable taking a risk here.”

When it came to finding an actress for the role of strong-willed Dr. Lily Houghton, the filmmakers did not have to look any further than Golden Globe and SAG Award-winning actress Emily Blunt.

And luckily for all, Blunt was immediately drawn to the character of Lily Houghton when she read the script.
“I was just so struck by Lily’s determination and tenacity, and the fact that she was so ahead of her ti me, considering that the film is set in 1917,” says Blunt.

“There was so much inequality between men and women and what was expected of her at the ti time. But she doesn’t subscribe to what was appropriate for her sex. And I found her really funny. She’s very reckless and heedless and adventurous. I admired her spirit.”

Says Johnson of his partner in crime, “I was a big fan of Emily Blunt even before we worked together. Her acting speaks for itself. She’s award-winning, and she has all these wonderful things that she brings to the table from nuance to tone to inflection. There’s nothing she can’t do. She’s one of the most diverse and multi talented actresses. She can sing, she can dance, she can go deep, she can do darker and she can go lighter. It was so special to have Emily come on and be my co-star.”

Playing Captain Aguirre is Venezuelan-born actor Edgar Ramírez was drawn into the suspenseful unpredictability of the adventure.

“I loved it. It is exciting. It keeps you guessing,” says Ramírez.

“I always relate the film to some sort of board game, where you go forward and then you go back, and then there are setbacks and then you overcome them, and then you have to start all over again. When you’re about to reach the goal, you’re set back a few squares. All the players are trying to get the same thing, but they all get in each other’s way. That’s what the film is like, and I love that dynamic.”

Lily’s brother, MacGregor, joins her and Frank on their expedition and is played by Jack Whitehall.

“It’s so special to be a part of a Disney film,” enthuses Whitehall.

“I grew up on these films and loved them all. I am obsessed with Disney, I have always been obsessed with Disney. Upon first meeting Sean Bailey [Disney’s president of production] I begged him to be in ‘The Lion King,’ which didn’t pan out. But now I’m doing ‘Jungle Cruise’ and I’m just overjoyed to be part of the Disney family.”

“Jack’s sort of become my brother, and we have taken on that relationship off set as well,” comments Blunt.

“I’d never met him before this, but I grew up like five minutes from him. Our mothers now know each other. They have dinner together. He’s just divine. He makes me laugh so much. We were so lucky to get him.”

Adds Dwayne Johnson, “Jack Whitehall is an outstanding talent and very funny. With the character of MacGregor, you have to have somebody who has a warmth and a soul. Jack was just perfect for the role, and we’re all quite proud of his performance. He is an incredible talent. More importantly, he’s a really good guy.”

Veteran actor Paul Giamaƫ portrays Nilo, who has a long history with Frank Wolff , Dwayne Johnson’s character.
“I do try to add layers to each character I play,” says Giamaƫ.

“Before filming I suggested this idea of the cockatoo and slowly began to dread my own bright idea. But then it turned out to be great, because Lover was terrific.”

As one of Giamat’s favourite co-stars, Lover Girl aka Lover, a Moluccan cockatoo playing Rosita, gave Johnson and Blunt a run for their money.

“Nilo is feared by everybody in town, yet this sweet, lovable bird is the one thing he has in his life, and she brings out a different side of him. He really adores Rosita, and it just shows some humanity for this otherwise unlikable man. So my great idea actually did pan out,” says Giamaƫ.

Jesse Plemons, who plays Prince Joachim, worked with director Jaume ColletSerra to develop the villainous character. “We discussed how far we wanted to take Prince Joachim’s sinister, scary qualities and how much we wanted to incorporate some sort of unpredictable elements,” recalls Plemons.

“We tried to create a villain character that feels unique. It was just about finding his quirks. He’s someone who is forward-thinking and looking far ahead into the future. So, I tried to keep that in mind when I was working on the character.”
Jungle Cruise is out in cinema's and available on Disney Plus now.